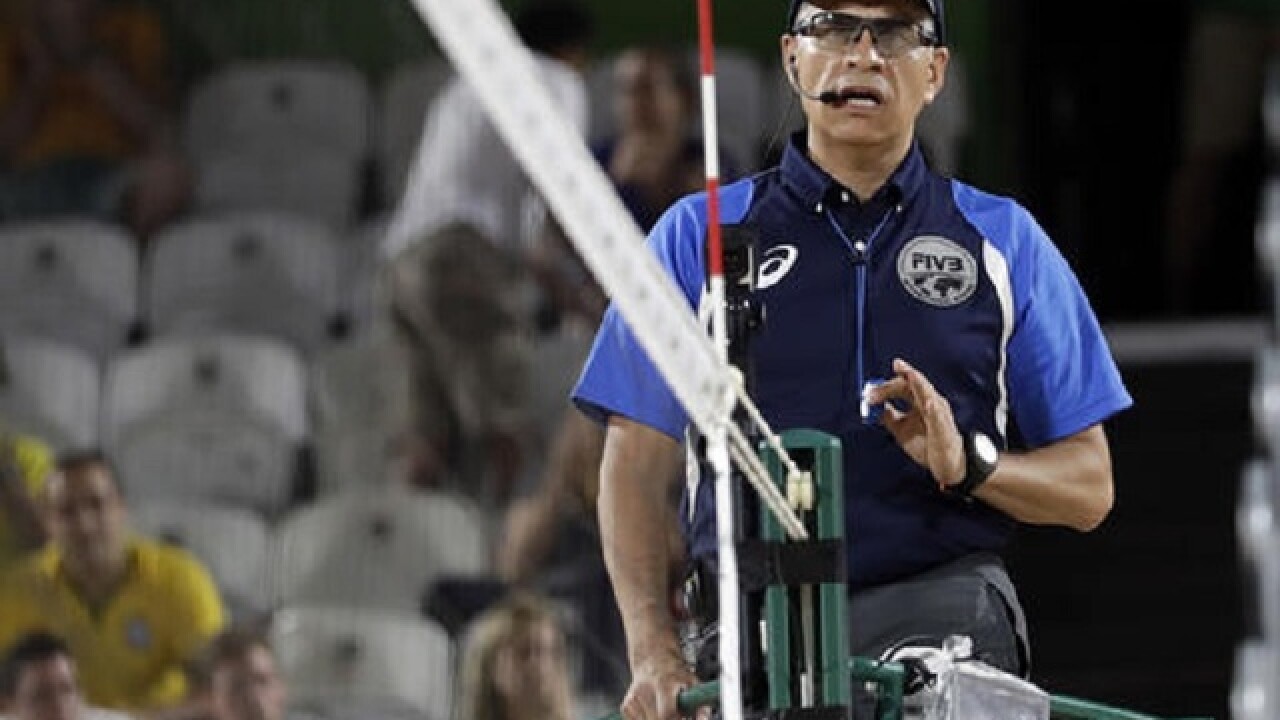 By: Associated Press
Posted at 11:03 PM, Aug 08, 2016
RIO DE JANEIRO (AP) — It's match point at the Copacabana beach volleyball venue, and a spike catches the line for the winning point.
Or does it?
While one side celebrates an apparent victory, the would-be losers turn to the first referee and form a "C'' with their fingers to challenge whether the ball was in or out. The ref signals to the replay booth by tracing out a TV screen with his index fingers and everyone — the players, the fans, the viewers at home — waits for the result.
The Olympics are using a replay system in volleyball and beach volleyball for the first time in Rio de Janeiro, and so far it has accomplished the goal of cleaning up calls that have the potential to influence the outcome of a match.
"We want the game to be more transparent," said Angelo Squeo, the director of beach volleyball for the international federation. "We want the players to be happy with the decisions. We want the game to reflect what happens on the field of play."
Although in use for a couple of years in indoor volleyball, the challenge system was first brought to the beach at the Rio de Janeiro test event last year. This is the sixth FIVB beach event with the Hawkeye system, the same one used at major tennis tournaments.
"I cannot imagine now for a moment going back," Squeo said on Monday. "For sure, players are happy, spectators are happy, because the match doesn't end on a mistake. It's an essential device."
While replay challenges have been known to slow other sports to a crawl — imagine a major league baseball manager on the top step of the dugout, waiting for the signal from his video people — volleyball seems to have it under control, for now.
Teams get two unsuccessful challenges per match. They have five seconds to challenge, and only a handful of line and net calls are eligible. (Notably excluded are judgment calls, like whether a player has lifted or double-hit the ball on a set.) The decision is made by an official with a monitor in a booth behind the players' benches.
"We think it's great," Dutch player Madelein Meppelink said after beating Costa Rica 21-16, 21-16 on Monday to improve to 2-0 in pool play. "For the referee, it's hard to see everything."
Squeo said about 25 percent of calls are overturned; the average time for a review is about 30 seconds. While they wait, the fans at the indoor volleyball in Maracanazinho arena chant and clap in unison and then cheer or boo the decisions.
Meppelink said her only complaint is that the system could go even faster. But there also have been a couple of times where the replay took some of the excitement out of a finish.
On the first day, China called for a review on a net fault on a match point against Switzerland in the third set and appeared to win the challenge. The Chinese women celebrated and took the microphone to thank the crowd, but the Swiss continued to argue with first referee Lucie Guillemette.
After several minutes, the officials called everyone back to the court and resumed play because the Chinese had finished out the point instead of stopping play to challenge the call immediately.
"I didn't think she (the referee) was going to listen to us, but we knew we were super-right" because it had happened to them before, said Switzerland's Isabelle Forrer, who lost the match to China anyway a couple of points later.
When Casey Patterson and Jake Gibb played Austria on Monday, Gibb hit the net on the final point, a spike that went out and otherwise would have kept the Americans alive. Gibb appealed to the referee that the ball had hit the sand before he faulted, to no avail.
"That's just us not giving up," Patterson said after the 21-18, 21-18 dropped them to 1-1 in pool play.
Patterson hasn't had the opportunity to use the challenge system yet, because it's only been at a half-dozen events, and even then only on the championship court that's wired for it. Those are usually reserved for the hometown favorites and other marquee teams.
Squeo said the FIVB plans to expand the system to a dozen or more of the top-tier events next year. It costs about $30,000 per tournament to have the system, and the FIVB is looking for a sponsor to pay for it.
But they won't be able to do what Meppelink wants: go back in time and fix some of the calls that went against her in the past.
"I can think of points that I wished we had the challenge system," she said.
Copyright 2016 The Associated Press. All rights reserved. This material may not be published, broadcast, rewritten or redistributed.