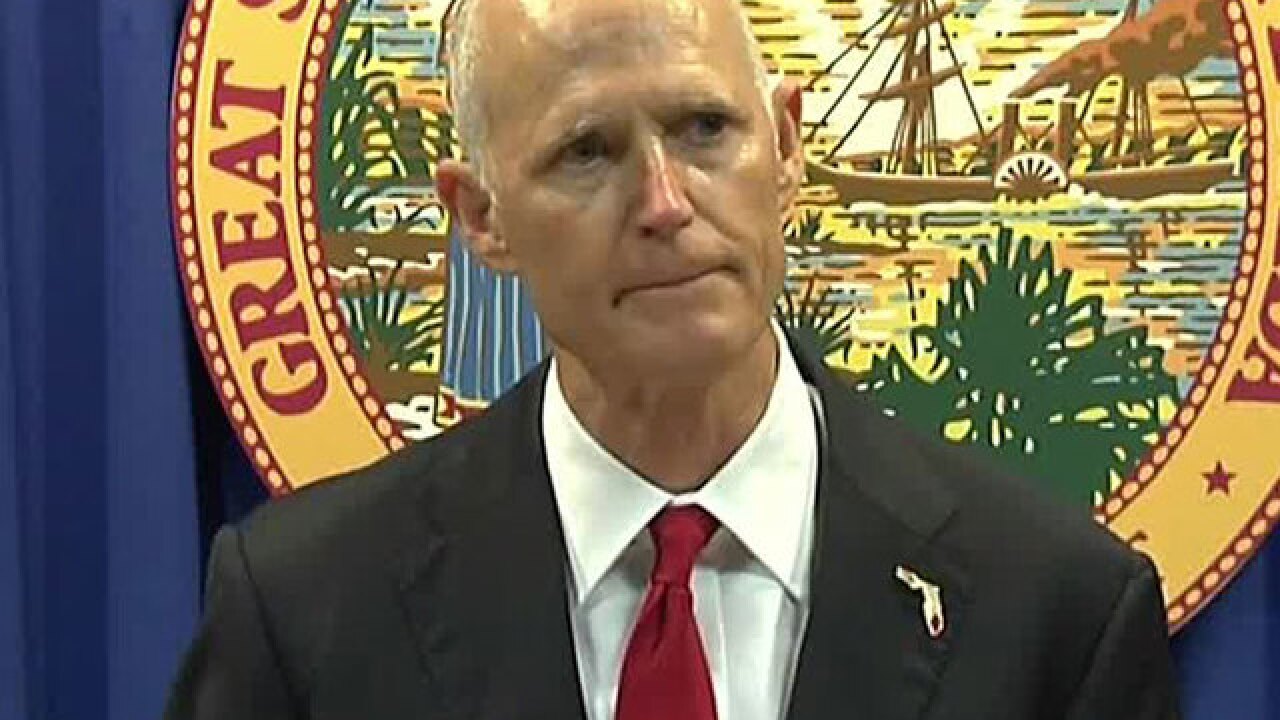 "The hardest thing I've ever had to do as governor is try to console a parent who has lost a child," said Scott, surrounded by families of the victims.

A controversial part of the new law is known as the Coach Aaron Feis Guardian Program, which arms some teachers if both the local school district and local sheriff's department agree. The provision is named after the coach who shielded students with his own body and died in last month's shooting.

The governor, who met with victims' families in Tallahassee before his announcement, expressed reservations about the provisions to arm personnel.

"I still think law enforcement officers should be the ones who protect our schools," he said, adding that the provision on arming educators isn't mandatory and local officials would decide whether to implement it.

"To the students of Marjory Stoneman Douglas High School, you made your voices heard," Scott said.

Lawmakers rushed to take action before the end of the legislative session Friday.

The rampage by a former student with mental health issues and armed with an AR-15-style rifle left 17 students and teachers dead on Valentine's Day at the Parkland high school near Fort Lauderdale. It also revived a contentious national debate on gun control.

From Arizona to Washington, young people walked out of schools in support of Marjory Stoneman Douglas High survivors who mobilized behind an emotional movement calling for a ban on weapons such as the one used to kill their friends and teachers.

Read the full text of the bill

For some shooting survivors who demanded an assault weapons ban, the measure didn't go far enough.

But it went too far for some Republican lawmakers opposing stricter measures on gun ownership.

Other provisions of the law include raising the age to purchase a firearm to 21 from 18, banning the sale or possession of bump fire stocks, giving law enforcement greater power to seize weapons and ammunition from those deemed mentally unfit, and additional funding for armed school resource officers.

Scott had 15 days to sign the bill into law or veto it. If he did nothing after 15 days, it automatically became law.

Under caveats to the "guardian" program, teachers who "exclusively perform classroom duties as classroom teachers" won't be allowed to carry guns on campus, unless they have military or law enforcement experience or if they teach a Junior Reserve Officers' Training Corps program. The program is voluntary, and qualified staff members who want to carry a gun must take 144 hours of training.

The state teachers union urged Scott in a letter Thursday to use his line-item power to veto funding for the Guardian program.

"We urge you to honor your instincts and act to keep additional firearms from our schools unless they are in the hands of trained law enforcement personnel," the letter from the Florida Education Association said. "Please veto the funding and language in the budget that provides for arming school personnel."

The union said teachers should not have to choose between confronting a gunman or getting their students to safety.

The bill has been an important political consideration for Scott, who is facing term limits as governor and is widely expected to challenge Florida's Democratic US senator, Bill Nelson, in November's midterm election.