Firefighter thrown up to 20 feet in Portland gas explosion 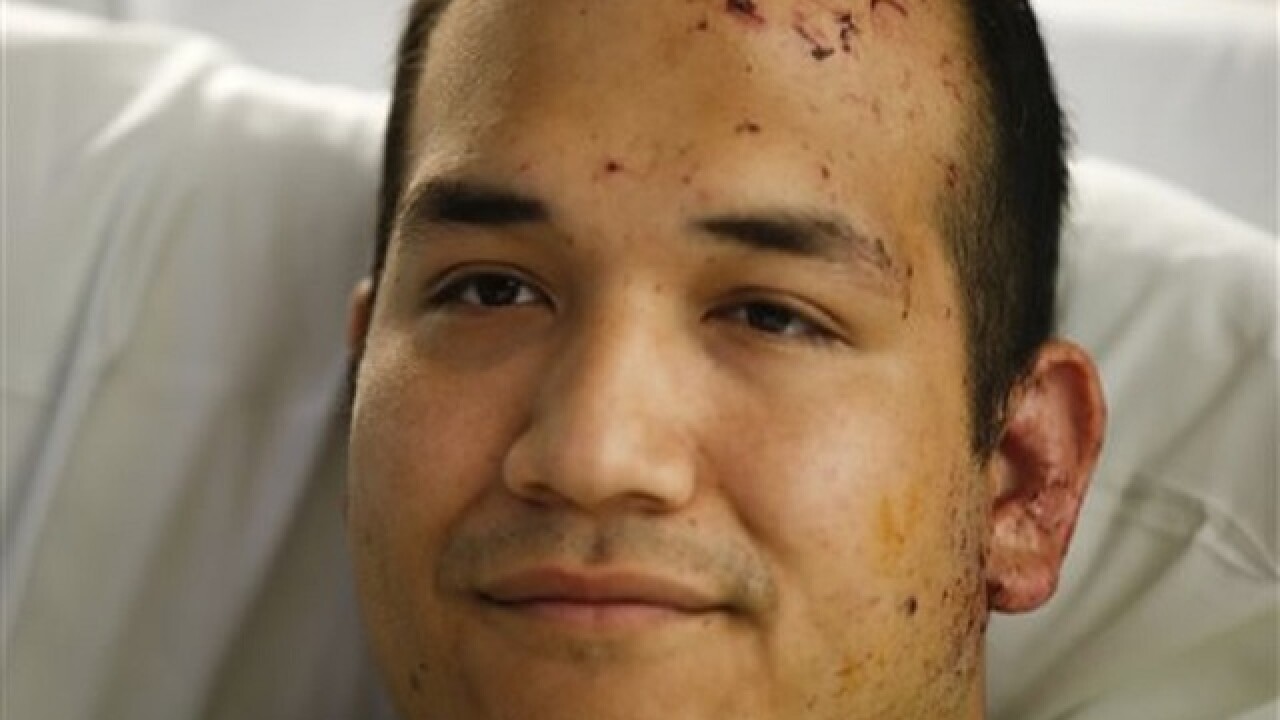 By: Associated Press
Posted at 9:01 PM, Oct 20, 2016
PORTLAND, Ore. (AP) — An injured firefighter who's being hailed as a hero for helping to evacuate a building before a powerful gas explosion in a Portland shopping district said Thursday he was tossed up to 20 feet by the blast.
The explosion hurt eight people Wednesday morning, demolished a three-story historic building and ignited a fire that sent a plume of smoke over the city. Three firefighters, two police officers and three civilians were injured.
None of the injuries were life-threatening.
Portland Fire & Rescue Lt. Peter St. John blacked out after the explosion and awoke in pain as chaos unfolded around him, he said in an interview Thursday from his hospital bed.
The blast broke his left femur and the tibia and fibula of his right leg, he said.
"I got thrown across the street, and I was tied up in a chain-link fence on the ground," he said. "I tried to wiggle my toes because I couldn't move my legs ... Then I looked at my right leg, I knew it was broken at that point."
Fire Chief Mike Myers said Wednesday that St. John ran inside the building to pull fire alarms and called the young lieutenant a hero, but St. John said he doesn't agree.
He did evacuate the building and order the fire trucks to move back, he said, but he looked for fire alarms and couldn't find any.
Other members of his team helped with evacuations and pulled alarms, he said.
"I feel like I'm not a hero. I just did what everyone else would have done," he said. "It's our job. We're to go in and protect the citizens, and that's what I did."
St. John, a father of three, underwent lengthy surgery Wednesday to insert a rod in his leg bone, but he appeared in good spirits Thursday.
He spoke softly from a reclining position in his hospital bed. He had small cuts on his forehead, cheeks, hands and ears from debris from the blast.
When first-responders first pulled up, the gas was so thick the firefighters could see waves in the air, St. John said.
He and other firefighters decided to don protective masks, he said.
"That's about right when the explosion happened, when we got our masks," he said. "Next thing I knew, I saw the explosion from the basement to the third floor."
The building blew up in three blasts — one for each level— with a slight pause between each boom, he said.
"I think there was fire because I saw orange. I must have blacked out a little ... because I felt the heat wave push me back and the next thing I knew I was on the ground, just in pain," he said.
As St. John waited to be evacuated from the scene, he noticed live power lines nearby and heard at least one more explosion, he said.
On Thursday, Myers reiterated that the heroism of St. John and others prevented a far worse outcome.
"I fully expected to get here and have firefighter fatalities," he said, adding that from the call he received he expected to find "numbers of firefighters down."
The blast reduced to rubble a 110-year-old building that housed a bagel shop and other businesses in the popular NW 23rd Street shopping district.
The walls and windows of a nearby building were blown out, and businesses three blocks away reported that their doors flew open from the force of the blast.
The intersections near the blast site were still closed Thursday.
NW Natural released a timeline saying the explosion occurred at 9:38 a.m., when many businesses were still closed.
Portland's NW 23rd Street — nicknamed "Trendy Third" — is packed with boutiques, bars and restaurants. Many are on street level with pricey apartments on the upper levels and a day care facility in the vicinity.
Construction workers nicked a three-quarter-inch natural gas line outside the building and gas collected inside. But the ignition source has yet to be determined.
The utility said it got a call at 8:55 a.m. about the gas line being hit. Authorities and utility workers responded in 15 minutes and evacuated the building, NW Natural CEO David Anderson said at a news conference.
People reported smelling gas as they were evacuated and later felt the explosion.
An employee at a nearby kitchen accessories store said he was in the washroom when he felt a huge explosion and emerged to find thick smoke and haze. Scott Bergler said 15 windows in the first-floor store were blown out.
As he evacuated the Kitchen Kaboodle shop, Bergler saw a firefighter on the ground who had been knocked flat by the blast.
"He was obviously in shock and crawling and having a hard time standing up," Bergler said.
Copyright 2016 The Associated Press. All rights reserved. This material may not be published, broadcast, rewritten or redistributed.