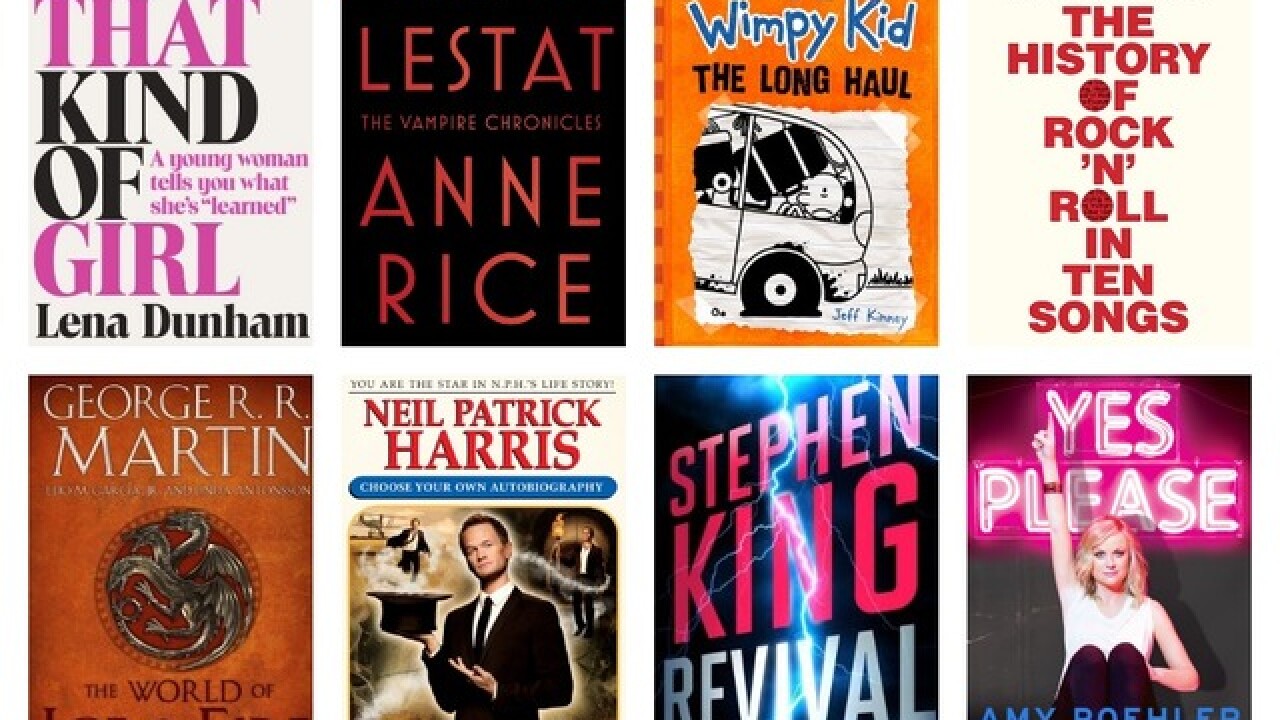 This week, Amazon.com released its annual Big Fall Books Preview, and the list is loaded with the biggest names in literature and entertainment.

“Fall is traditionally the biggest season for books and there are so many fantastic reads in store for our customers this year,” Sara Nelson, Amazon’s Editorial Director of Books and Kindle, said in a press release.

2014’s list of upcoming books include stalwart authors like James Patterson, Dean Koontz and Nora Roberts, as well as rising scribes like Patrick Rothfuss. Along with sure best-sellers, Amazon’s editors included their favorite under-the-radar picks that could become new favorites.

The tenth book in the bestselling Chief Inspector Armand Gamache Series, “The Long Way Home” should be a great choice for readers who enjoy mystery fiction in the Agatha Christy flavor. Canadian author Louise Penny’s novels have won several awards, including the prestigious New Blood Dagger in 2006. This book follows her beloved character Gamache into what turns out to be an active retirement.

Bestselling British writer Lee Child will release the 19th novel in his Jack Reacher series next month. The vigilante character was played by Tom Cruise in a 2012 big screen adaptation. In this entry, Reacher is working for the CIA and the U.S. State Department.

This nonfiction book for music devotees, marked an under-the-radar pick by Amazon’s staff, chooses 10 tracks recorded between 1956 and 2008 and explains how each embodies the spirit of rock ‘n’ roll. From Joy Division to Beyonce, writer Greil Marcus “unlocks rock ‘n’ roll history to find more than you ever thought might be there,” according to writer Jenny Diski.

“Edge of Eternity” by Ken Follett

The previous two entries in Ken Follett’s “Century” trilogy topped the New York Times best-seller list and there’s little reason to believe this concluding chapter won’t do the same. The series was called “truly epic” by Huffington Post and “engrossing” by Publishers Weekly, so for those who haven’t read “Fall of Giants” or “Winter of the World” yet, it might be time to pick them up.

“Not That Kind of Girl” by Lena Dunham

The first book by the creator of HBO’s hit series “Girls,” “Not That Kind of Girl” is a collection of personal essays from Lena Dunham that are likely to cause equal parts laughs and gasps. “If I could take what I’ve learned and make one menial job easier for you, or prevent you from having the kind of sex where you feel you must keep your sneakers on in case you want to run away during the act” Dunham writes in promotion of the book, “then every misstep of mine was worthwhile.”

Named after the hip New York City bar, “Death & Co.” promises to give readers “a complete cocktail education,” according to promotional materials. The 320-page book is full of photography, illustrations and infographics to help the budding mixologist along. This how-to book was labeled an under-the-radar pick by Amazon’s editors.

Whenever Picoult drops a new book, it’s all but guaranteed to top the New York Times best-sellers list. The author of “My Sister’s Keeper,” “Plain Truth” and “Nineteen Minutes,” this will be Picoult’s 24th release since 1992, making her one of fiction’s most prolific writers. The Amazon synopsis for “Leaving Time” promises a story about a daughter who searches for her mother online and through old journal entries.

One of the most interesting titles of fall 2014, “Choose Your Own Autobiography” lifts its style from the classic “Choose Your Own Adventure” genre, allowing the reader to step into actor Neil Patrick Harris’s shoes. Crown Publishing’s website touts the book as a “revolutionary, Joycean experiment” for readers that are “tired of memoirs that only tell you what really happened.”

With more than 275 million book sales under his belt, it’s likely you have at least one John Grisham novel on your own bookshelf. His latest legal thriller is set against the 2008 recession, when a young associate from New York City’s largest law firm loses her job. Grisham’s website promises of the book, “John Grisham has a new hero — and she’s full of surprises.”

A still from the fourth season of "Game of Thrones." (HBO)

“The World of Ice & Fire: The Untold History of Westeros and the Game of Thrones” by George R.R. Martin

Just in time for Halloween comes a tantalizing treat for fantasy literature fans. George R.R. Martin’s “A Song of Fire and Ice” series, the basis for HBO’s wildly popular “Game of Thrones,” is put under a microscope by the author as he gives a comprehensive 336 page history of the Seven Kingdoms. Just the thing to tide you over before the television show’s fifth season in 2015.

It’s been 11 years since bestselling author Anne Rice revisited her “Vampire Chronicles” series but she’s gone back to the blood-filled well with “Prince Lestat.” In 1976, “Interview with the Vampire” put Rice on the map — it will be interesting to see if a new audience will discover her classic series.

Another blockbuster, late-October release, this book of personal stories from Peabody Award-winning comedienne Amy Poehler promises to make the reader howl. With her lengthy body of work, it’s hard to believe Poehler hasn’t written a book before this — but “Yes Please” will add to her list of accomplishments.

“Diary of a Wimpy Kid: The Long Haul” by Jeff Kinney

The ninth entry in writer-illustrator Jeff Kinney’s beloved children’s book series will hit shelves in November and could make a great option for holiday shopping. The series has been flying high since its debut in 2007, with NPR naming it a “Must-Read” for kids 9-14 years old. “The Long Haul” follows the Heffley family on a disastrous road trip, according to Barnes and Noble.

The 48th novel from Stephen King sees the world’s favorite horror writer return to New England for a story that spans over 50 years “on its way to the most terrifying conclusion Stephen King has ever written,” according to promotional materials. An early review from Library Journal called the book “deeper than your average chillfest.”