Report: Package that exploded at Texas FedEx center was sent from Austin to another home in Austin 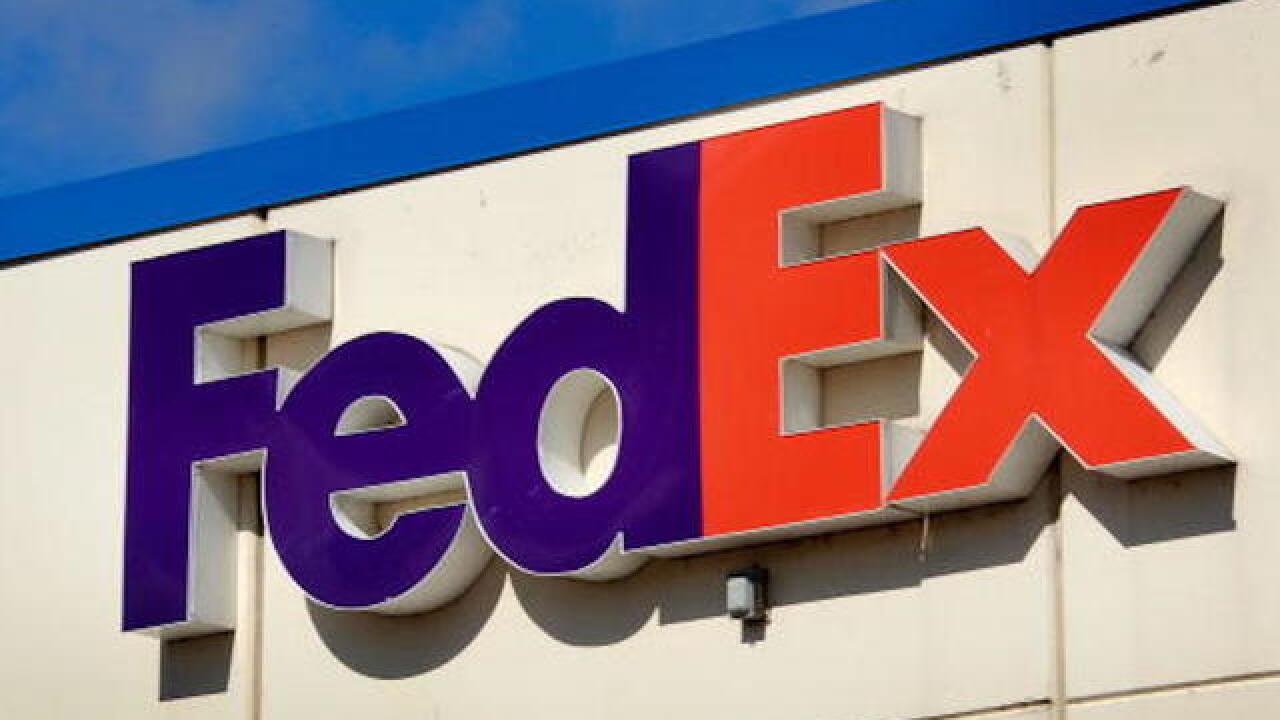 Copyright 2018 Scripps Media, Inc. All rights reserved. This material may not be published, broadcast, rewritten, or redistributed.
&lt;p&gt;CHICAGO - MARCH 19: A FedEx logo marks the location of one of the company's distribution center March 19, 2009 in Chicago, Illinois. After seeing its third-quarter net income plunge 75 percent the company said it plans to cut $1 billion of costs in the coming year. (Photo by Scott Olson/Getty Images)&lt;/p&gt;

Investigators are trying to determine whether an explosion early Tuesday at a FedEx facility outside San Antonio is connected to four explosions that have rattled the Austin, Texas, area this month.

The most recent blast happened inside a FedEx facility in Schertz, Texas, FBI San Antonio spokeswoman Michelle Lee said. Schertz is a San Antonio suburb that is roughly an hour's drive southwest of Austin.

One FedEx team member suffered minor injuries when a "single package exploded" at the ground sorting facility, company spokesman Jim McCluskey said Tuesday in a statement. An ATF spokeswoman earlier had said no injuries were reported.

"We are not providing any additional specific information about this package at this time," McCluskey said.

Based on preliminary information gathered at the scene, Lee said there could be a connection with the four Austin explosions, which killed two people and injured four others over 17 days starting March 2.

"We suspect it is related to our investigation," Lee said.

If the FedEx incident is confirmed to be linked to the Austin blasts, it would represent a new method for the bomber or bombers. None of the four previous explosives was mailed.

The ATF could not confirm that the latest explosion is associated with the Austin blasts, ATF spokeswoman Nicole Strong said. The ATF's Houston field division is at the FedEx facility in Schertz, the agency said on Twitter.

FedEx is "working closely with law enforcement in their investigation," McCluskey said.

In Austin, authorities have been combing for clues to the four explosions there, the first three of which involved cardboard packages that were left in front yards or porches and weren't delivered by the US Postal Service or services such as UPS or FedEx, police say.

In the fourth blast, a device was triggered by a tripwire Sunday, injuring two men, police said.

Key developments
• President Donald Trump has been briefed on the Austin bombings, a White House spokesman said Monday, adding that the White House pledges its support to local law enforcement.

• Three members of the Congressional Black Caucus called Monday for federal officials to classify the bombings as terrorist attacks and determine whether they are "ideologically or racially motivated."

• The NAACP called the incidents "acts of domestic terrorism" and called for vigilance and caution for communities in Austin.

The four Austin bombings
The first three explosions -- one on March 2, and two more on March 12 -- killed or wounded three African-American people and one Hispanic person after they encountered the packages. The explosions happened in east Austin areas that predominantly have minority residents, and some in the area expressed concerns that the attacks might have been racially motivated.

Police have not uncovered a motive and have not ruled out the possibility those bombings could be hate crimes.

The fourth explosion, on Sunday, injured two white men. That device had been left on the side of a road in an area where most residents are white.

"The use of a tripwire is far less discriminating than leaving parcel bombs at residences and suggests that (Sunday's) victims were not specifically targeted," the global think tank Stratfor said in one of its Threat Lens reports.

If one perpetrator is behind the four Austin bombs and the device in Schertz, then the person deployed an unusually wide range of skills and delivery methods, CNN law enforcement analyst James Gagliano said.

"Some of these folks, ... as long as the bombmaker walks away with 10 fingers and 10 toes, that's successful to them," Gagliano, a retired FBI supervisory special agent, said.

"But the method, the delivery system and the different means that he's having these things in place shows that he's trying to show -- if it's the same person on all five of these -- a full panoply of different ways of doing this," he added, "and that's frightening."

What agencies are involved?
More than 350 special agents assigned by the FBI, as well as ATF agents and forensic investigators in Quantico, Virginia, are on the Austin case.

How are they examining the evidence?
ATF has taken evidence from the four blast sites in Austin, Police Chief Brian Manley said.

"The prior three scenes are already in the lab at Quantico, and the evidence from the scene from last night is on its way to Quantico as well," he told CNN's Anderson Cooper Monday night.

"They're looking at the devices, they're comparing them, looking for similarities," he said. "The similarities they've seen to this point, lead them to believe -- as we do -- that these are all being constructed by the same person or persons who are responsible for this."

How are they handling the tips?
Austin police has received lots of tips, Manley said Monday night.

"As each tip comes in, it gets assigned to either a team of FBI agents, ATF agents or Austin Police detectives to do follow-up work on," he said.

Manley urged residents to call police with any information.

"No matter how inconsequential you think it may be, that may be the piece of evidence we need to link it together and solve this before we have someone else in our community that gets seriously injured or killed," he said.

What resources are they getting?
Texas Gov. Greg Abbott announced more than $265,500 in emergency funding for the Austin Police Department and the Texas Ranger Response Team to purchase seven portable X-ray systems.

The systems can be used on site to quickly assess the safety of packages.

"I want to ensure everyone in the Austin region and the entire state that Texas is committed to providing every resource necessary to make sure these crimes are solved as quickly as possible," Abbott said in a statement.

The reward for information leading to the arrest of anyone responsible for the blasts totals $115,000.

What are police asking residents to do?
Police are appealing to residents to pay attention to their surroundings. Residents shouldn't approach or touch anything that looks suspicious, Manley said.

"We now need the community to have an extra level of vigilance and pay attention to any suspicious device -- whether it be a package or a bag, a backpack -- anything that looks out of place," Austin's police chief said Monday. "Do not approach items like that."

Authorities are also asking anyone in the neighborhood with security camera footage to call police.