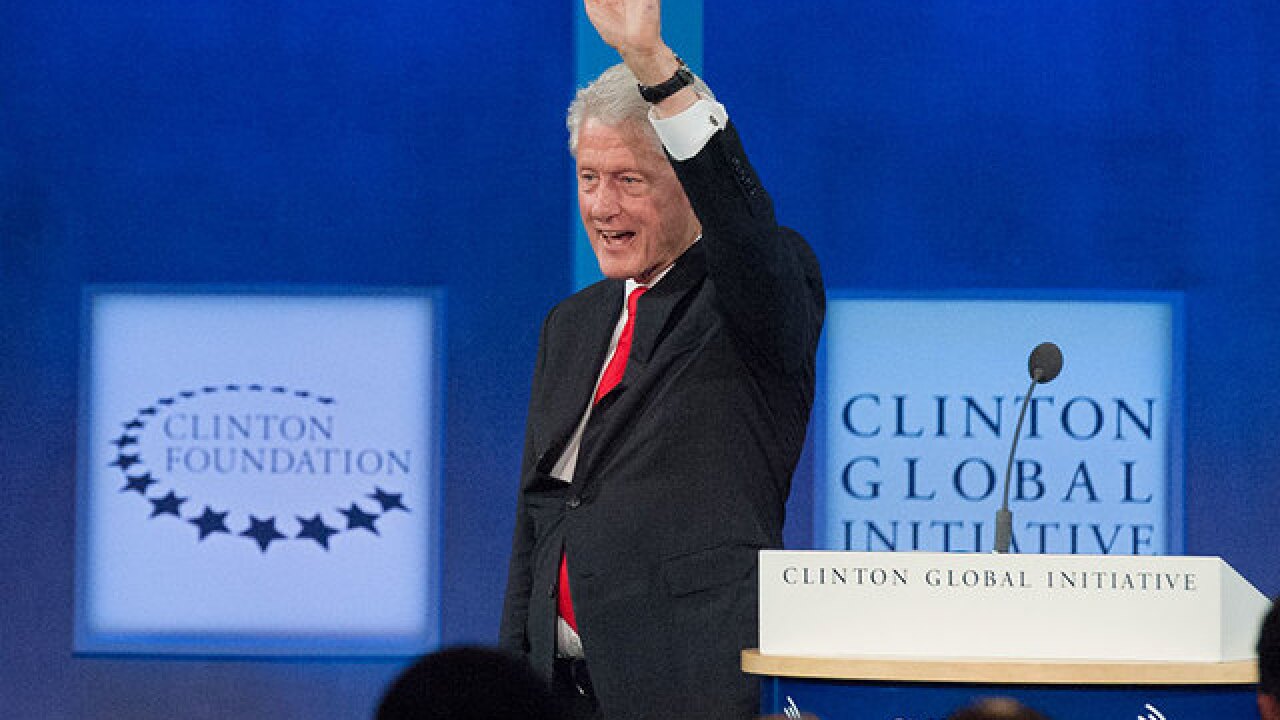 &lt;p&gt;Former President Bill Clinton waves to the audience after delivering a speech during the annual Clinton Global Initiative on Sept. 21, 2016, in New York City. Clinton defended the foundation, founded in 2005, at the final CGI meeting. (Photo by Stephanie Keith/Getty Images)&lt;/p&gt;

While Donald Trump’s foundation remains under scrutiny for failure to follow charity laws in New York requiring it to register with the state, a Scripps News investigation has uncovered documents that reveal charity regulators cited a Clinton charity for violating similar laws in Mississippi for three consecutive years starting in 2001. Records also show the charity repeatedly failed to disclose those instances to other states, as required.

Charities that wish to solicit funds in a majority of U.S. states are required to register with state agencies charged with protecting the public. The goal of state charity regulators, experts say, is to prevent scam artists and fraudsters from preying on the public, such as those who falsely claim to represent organizations raising money for helping others. To stay in good standing, many states require charities to answer a number of questions every year designed to help them spot potential red flags.

Records obtained by Scripps reveal that in 2001 Mississippi regulators cited the Clinton charity, then known as the William J. Clinton Presidential Foundation, for soliciting funds in the state without having a proper registration. It is a similar charge to what New York Attorney General Eric Schneiderman has lodged against the Donald J. Trump Foundation in recent months, ordering the private foundation to halt charitable fundraising temporarily in New York state until the foundation can get its filings in order.

In the case of the Clinton charity, Mississippi regulators offered to settle the violation in 2001 if the William J. Clinton Presidential Foundation agreed to pay a $300 fine.  The state and the foundation reached a consent agreement where the charity said the foundation’s failure to properly register that year was “completely inadvertent and unintentional.”

In 2002, Mississippi regulators again found that the Clinton foundation was soliciting contributions without the proper registration. For the second time in two years, the state offered to settle the charges without a formal hearing if the foundation would agree to pay a fine, which this time went up to $500.

The next year, in 2003, state regulators cited the Clinton charity once again for violating the same registration law. In a March 6, 2003, letter from Bill Wilkerson, the director of Regulation and Enforcement for the Mississippi Secretary of State’s office, the state told the Clinton foundation it “has solicited charitable contributions without a valid registration in violation of Miss. Code.” Wilkerson warned that any charity in violation is “subject to a cease and desist order, denial, suspension or revocation of its most recent application for registration, and an administrative penalty of up to $25,000 for each offense.”

The state offered to settle in exchange for a penalty payment this time of $2,000, with the condition that the Clinton foundation agree to enter into its third consent agreement in three years.

The foundation’s general counsel, Ricardo Castro, said, “Regarding the consent agreement, it very clearly states there is ‘no formal administrative hearing and determination of wrongdoing.’ ” Castro said the fact the foundation agreed to “an error is immaterial — this is a minor error.”

Castro said the foundation is currently registered in Mississippi and that Mississippi regulators have fined hundreds of charities for doing the same thing.

Castro added that “legal experts would likely characterize this at the level of a traffic ticket” and said, “We voluntarily entered into a consent agreement, and paid a small fine.”

Rutherford, who is now the dean of the Clinton School of Public Service at the University of Arkansas, responded in an email saying, “I relied on those who worked in administration and finance to process the paperwork. Any mistake was one of oversight and not of intent.”

In filings with other states, the foundation repeatedly denied having ever entered into any settlement agreements.

The filings for Massachusetts present a range of responses. For 2003 and 2004, the foundation said “No,” when asked under penalty of perjury if it had “entered into a voluntary agreement of compliance or consent judgment with any government agency.” But in a January 2007 filing the foundation answered “yes” to that question, acknowledging the 2003 Mississippi consent agreement while still failing to disclose the other two agreements.

In its 2009 filing with New Mexico, the Clinton foundation answered “No” when asked if it had “ever entered into a voluntary agreement of compliance with any government agency.” The Clinton foundation repeated its denial in its separate registration statements for 2010, 2011, 2012, 2013 and 2014 in the state.

The Clinton foundation did not respond to questions about statements it made to other regulators about its penalties or settlements in Mississippi.

New Mexico regulators say charities are expected to fully and accurately disclose any prior legal troubles when it comes to state disclosure forms. “The full history of the entity, regardless of time, needs to be disclosed,” said James Hallinan, communications director for the office of the New Mexico Attorney General.

“They want to know, have you messed up,” said Carter, who says disclosing even repeated citations in the case of the Clinton foundation likely would not have resulted in a denial of registration. “It’s not like they’d be banned.  They would just be on the radar — maybe subject to more questions when they submit something.”

Carter said that one citation for failing to properly register would be a minor problem but three citations in three years shows “sloppiness more than anything — not having the compliance part of their operation under control.”

Carter believes the foundation should correct any filings that claim consent agreements do not exist.

“I would tell them to go back and amend it. Correct it. Show their good faith.”

Oregon would be a good place to start.

The state’s Department of Justice has long asked every charitable organization to disclose if they “ever signed a voluntary agreement with any government agency … or been a party to legal action in any court or administrative agency regarding charitable solicitation, administration, management, or fiduciary practices.”  In five separate annual filings for reporting years ranging from 2010-2014, the Clinton foundation repeatedly answered “No,” denying it had ever signed any such agreement.

Foundation chief financial officer Andrew Kessel signed off on the denials “under penalties of perjury”, in every one of the five years of the Oregon filings that Scripps reviewed. Kessel also is listed for all five years on the state filings as the “person responsible for retaining the organization’s records.”

Hillary Clinton joined the Clinton Foundation in March 2013 and resigned from the board on April 12, 2015. Bill and Chelsea Clinton currently serve on the charity's board.

Records obtained by Scripps appear to show that Kessel was aware of at least one consent agreement the foundation made with Mississippi authorities. He personally signed off on documents sent to charity officials in West Virginia for a 2005 filing that contained a copy of one of the foundation’s consent agreements.

Attorney Ellis Carter said she would normally advise a client that made an incorrect statement under the penalty of perjury to only correct any mistakes going back between three and six years, which is the typical range for the federal statute of limitations for errors made in federal filings with the IRS.

She said state statutes might vary, but believes a foundation connected to someone who wants to be the next president of the United States should correct all such errors and provide copies of the regulatory settlements to states that require them. “It would send a message compliance is important.”

Mark Greenblatt is senior investigative correspondent at the Scripps News Washington Bureau, and Maren Machles is a national staff intern. You can follow Greenblatt on Twitter at @greenblattmark.