Ex-soccer player dies after getting tased by UK police 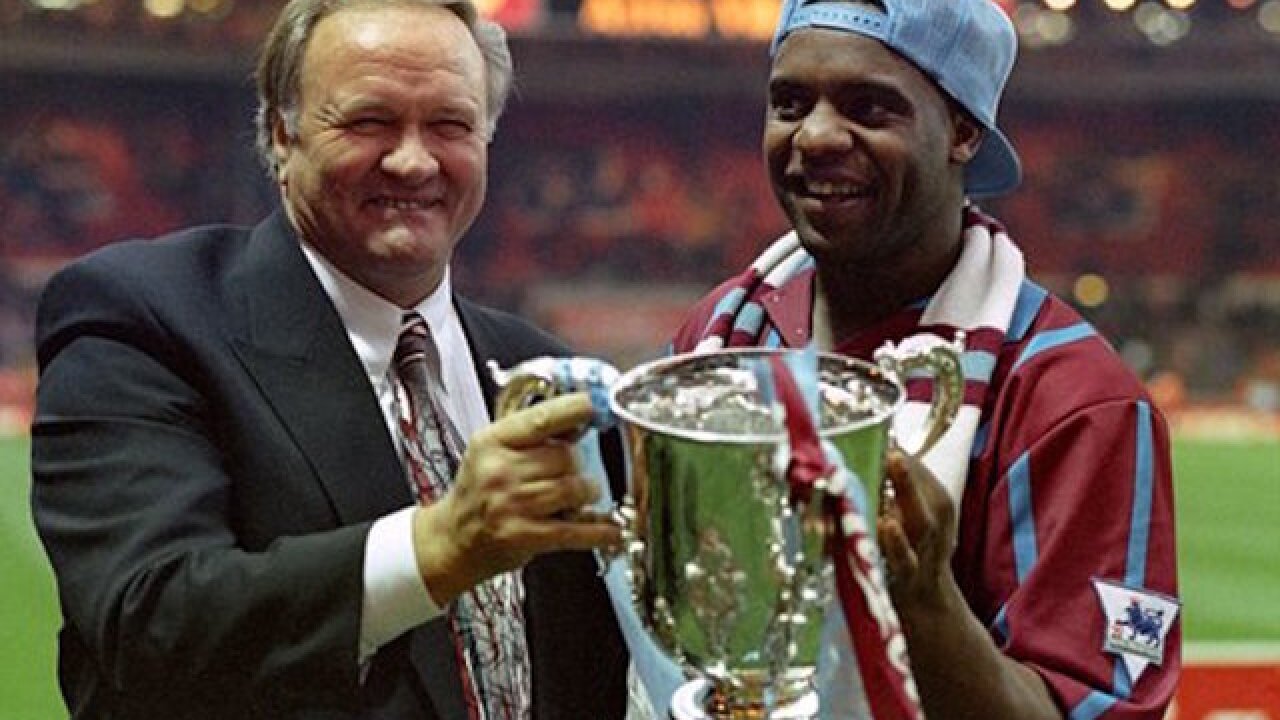 Copyright Associated Press
&lt;p&gt;This is a March 27, 1994 file photo of Aston Villa manager Ron Atkinson holding the English League Cup with former Aston Villa player Dalian Atkinson at Wembley Stadium in London . English football club Sheffield Wednesday says Dalian Atkinson one of its former players has died, following reports he was shot with a Taser by police. Britainís Press Association reported Monday Aug. 15, 2016 that Atkinson died around 90 minutes after a Taser was used on him by police. Local police said in a statement that officers had deployed Taser on a 48-year-old man. (Tony Harris/PA File via AP)&lt;/p&gt;

LONDON (AP) — The death of a former Premier League soccer player who was shot with a Taser by police is being investigated by Britain's Independent Police Complaints Commission.

Dalian Atkinson died around 90 minutes after police officers used a Taser on him. Sheffield Wednesday, Aston Villa and Ipswich all paid their respects to the 48-year-old in posts on their websites.

"The IPCC is conducting a full and thorough investigation into all of the circumstances surrounding his death including the use of force," the commission said in a statement.

England's Football Association said it was "saddened to hear of the passing" of Atkinson, who represented England's 'B' team.

Forensic officers were at the property in question in Telford on Monday and the road remained cordoned off.

Police said a man received medical attention after officers used a Taser when they arrived in the early hours of Monday.

"An ambulance was dispatched and upon arrival found a man who had been Tasered," said the West Midlands Ambulance Service, which added that the man's condition deteriorated as he was being taken to hospital and he went into cardiac arrest.

"Despite the efforts of the crew and hospital staff, it was not possible to save him and he was confirmed dead at hospital, shortly after arrival."

Atkinson scored 20 Premier League goals during his time at Aston Villa from 1991-95. He also played for Ipswich, Wednesday and Manchester City in England, and had spells with Real Sociedad in Spain, Fenerbahce in Turkey and also in South Korea. He represented England's 'B' team.

Atkinson was most famous for a scoring a goal for Villa against Wimbledon in October 1992, when he ran from inside his own half, evaded a number of attempted challenges before chipping the ball over the goalkeeper and into the net. It was voted as goal of the season in the 1992-93 Premier League.

"Aston Villa is saddened to hear of the death of our former striker Dalian Atkinson," the second-tier club said in a statement. "Dalian undoubtedly provided real memorable moments during his time in claret and blue."

Wednesday said Atkinson was "widely regarded as one of the most exciting football talents to emerge during the mid-1980s to early 1990s."

In an era when English players seldom played abroad, Atkinson scored 12 goals in 29 league games during one season with Real Sociedad, before returning to England to play for Villa. He scored 10 goals in 21 league games for Istanbul-based Fenerbahce after leaving Villa.