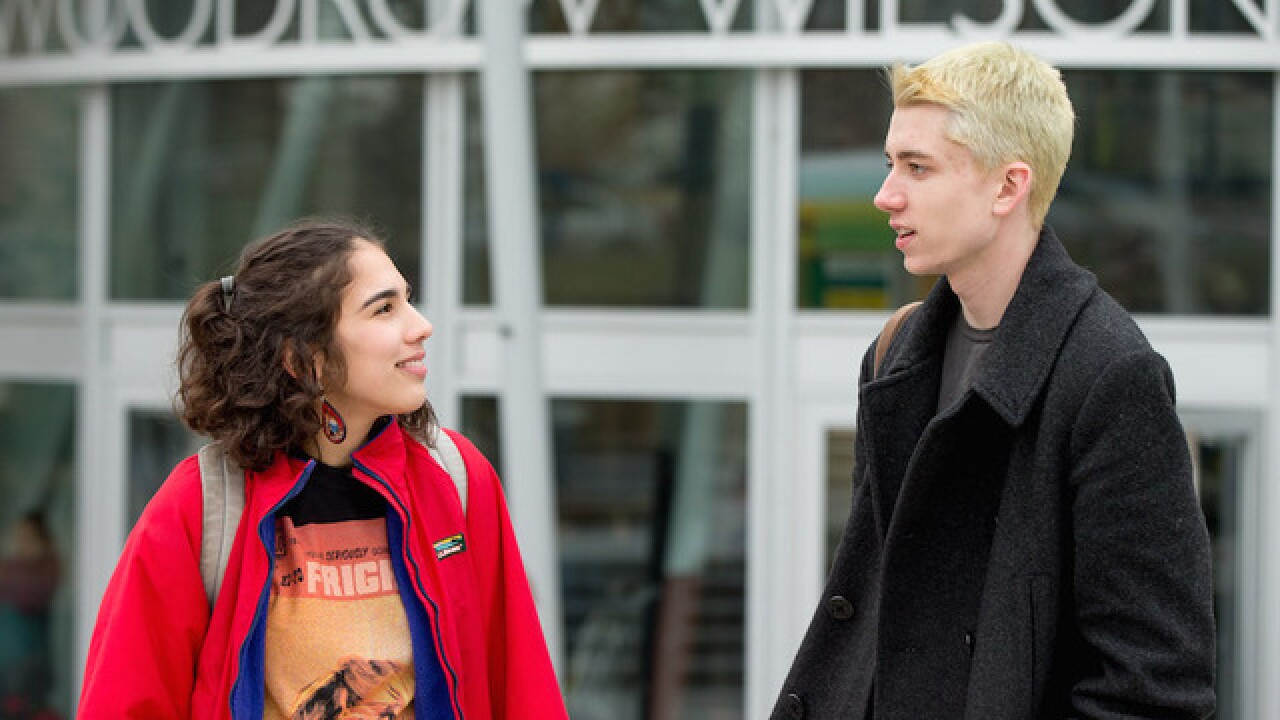 &lt;p&gt;High School juniors Brian Keyes and Isabel Suarez, both 16, pose for a photograph in front of Woodrow Wilson High School in Washington, Thursday, March 3, 2016, after recently taking the new SAT exam. The new exam focuses less on arcane vocabulary words and more on real-world learning and analysis by students. Students no longer will be penalized for guessing. And the essay has been made optional.&lt;/p&gt;

WASHINGTON (AP) — Not so tricky. More straightforward. Guessing allowed. The newly redesigned SAT college entrance exam that debuts nationally Saturday is getting good reviews from some of the students who took it early this week.

The new exam focuses less on arcane vocabulary words and more on real-world learning and analysis by students. Students no longer will be penalized for guessing. And the essay has been made optional.

The College Board says more than 463,000 test-takers signed up to take the new SAT in March, up slightly from a year ago.

Because the exam is new, the College Board, the nonprofit organization that owns the SAT, has restricted the exam on Saturday to those applying to college or for scholarships, financial aid or other programs requiring a college test score. People who don't fall into these categories have been rescheduled to take the May test, which will be released at a point afterward. The College Board said it took the action because of concerns about possible theft.

Things to know about the new SAT exam:

The new SAT continues to test reading, writing and math, with an emphasis on analysis. Gone: some of those obscure vocabulary words like "lachrymose" that left kids memorizing flash cards for endless hours. Test-takers will instead see more widely known words used in the classroom. Students will have to demonstrate their ability to determine meaning in different contexts.

Go ahead, take a guess. Test-takers no longer will be penalized for wrong answers.

In math, students will see more algebra and problem solving, instead of testing a wide range of math concepts. But use of calculators is limited to certain questions.

Overall, there are fewer questions — 154 on the new test plus one for the essay, compared to 171 on the old version.

Students will have a choice about whether to write the essay.

A perfect score goes back to 1,600 with a separate score for the essay.

"There aren't as many questions where it's trying to trick you ... It was much more straightforward," he said

For math, he said, "the new version was a lot more like basic concepts, so it wouldn't be very obscure formulas that you have to remember. If you had the basics of algebra down, even if the problem was difficult, you could work your way through it."

Said classmate Isabel Suarez: "I liked it better than the old one. I thought that it was way more applicable to what we've been learning in school. The English was a lot easier for me than it was with the old one."

Isabel, a junior, said the math was a little harder. "It was more algebra based, but I think I was able to perform a lot better on it than the old one because it was stuff that I actually learned in school."

In fact, Suarez, who likes to write, said she enjoyed the reading section. "My AP English class definitely really prepared me for it. I honestly enjoyed the grammar part because I like to pick out problems in writing. It was pretty fun actually."

The exam was administered Wednesday at Wilson and other District of Columbia high schools and at schools in more than a dozen states as part of SAT School Day.

WHAT'S BEHIND THE REDESIGN?

This was the first revision in the SAT since 2005. The head of the College Board says students taking the new SAT will find more familiar reading passages, vocabulary words and math.

"The sum of the redesign of the test is to make it much more like the work that kids are already doing in high school," said David Coleman, president and chief executive officer of the board. It was retooled, he said, "so that all kids could feel that they had a shot."

With fewer questions on the new test, Coleman said, there's more time for each of the reading and math questions.

"If you've been preparing and putting in your study time, then you should go in confident. If you haven't, you can take this test again or you can take the ACT, too. It's not the end of the world if you don't perform well," he said.

Don't skip the essay. Weiss said Kaplan's research of college admissions officers shows that many of the top most-competitive programs for college do look at the essay and it's an important part of their admissions process. "Make sure you are writing a good, structured essay that answers the prompt," said Weiss. "Make sure that you are varying your word choice and your sentence structure."

On reading, Ned Johnson, president of PrepMatters, said students should be literal, not literary. He said students could help themselves by coming up with their own answers before looking at the options provided.

Johnson says the new test has math problems that are much wordier than before. "Read slowly," he said. "If you read and analyze the problems piece by piece, you can avoid feeling overwhelmed and 'translate' all those words into math, you know how to do."

The College Board has teamed up with online educator Khan Academy to offer SAT practice with the new exam — for free — to all students through diagnostic quizzes and interactive practice tests. The tests are available at https://www.khanacademy.org/sat.