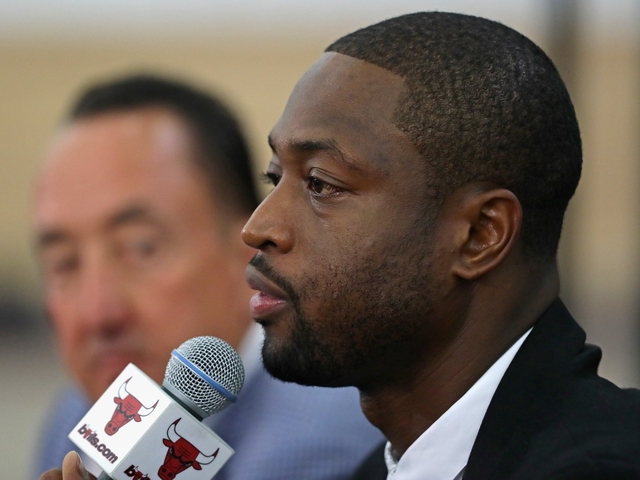 &lt;p&gt;The cousin of NBA star Dwyane Wade was killed Friday by a gunshot in Chicago.&lt;/p&gt;&lt;p&gt;Nykea Aldridge, 32, was pushing her baby in a stroller on her way to register her children at a nearby school when two men walked up and opened fire on the man she was with. She was caught in the crossfire and&amp;nbsp;&lt;a href="http://www.chicagotribune.com/news/local/breaking/ct-chicago-shootings-violence-20160826-story.html" target="_blank"&gt;died at the hospital&lt;/a&gt;.&lt;/p&gt;&lt;p&gt;&amp;quot;Bullets that fly around that have no name decided to find its way to her head,&amp;quot;&amp;nbsp;&lt;a href="https://www.youtube.com/watch?v=Vh0LqFQMSro" target="_blank"&gt;said Wade&amp;#39;s mother Jolinda&lt;/a&gt;, a pastor.&lt;/p&gt;&lt;p&gt;That was Wade&amp;#39;s mother, Jolinda, who just the day before appeared on&amp;nbsp;&lt;a href="http://theundefeated.com/features/the-undefeated-holds-conversation-on-athletes-guns-and-violence/" target="_blank"&gt;a town hall discussion hosted by ESPN&amp;#39;s &amp;quot;The Undefeated&amp;quot;&lt;/a&gt;&amp;nbsp;where she and her son made a public stand against gun violence.&lt;/p&gt;&lt;p&gt;&amp;quot;It&amp;#39;s deep-rooted, and this is something that didn&amp;#39;t start today, this is something that&amp;#39;s not going to end tomorrow, but this is something that we can start a conversation, we can start the work today and hopefully, eventually, we can stop it,&amp;quot; Wade said.&lt;/p&gt;&lt;p&gt;Gun violence is widespread in Chicago, and it appears to be growing.&amp;nbsp;&lt;a href="http://crime.chicagotribune.com/chicago/shootings/#note" target="_blank"&gt;According to the Chicago Tribune&lt;/a&gt;, over 2,700 people have been shot in the city so far this year, only about 250 shy of the total for all of 2015.&lt;/p&gt;&lt;p&gt;Speaking out about that violence is personal for Wade, a Chicago native who recently signed with the Chicago Bulls. But he isn&amp;#39;t alone among NBA stars. At the ESPY awards in July, Wade opened the program along with Carmelo Anthony, Chris Paul and LeBron James.&lt;/p&gt;&lt;p&gt;&amp;quot;The endless gun violence in places like Chicago, Dallas, not to mention Orlando, it has to stop; enough,&amp;quot; Wade said.&lt;/p&gt;&lt;p&gt;Aldridge was the mother of four children. The baby in the stroller she was pushing was unharmed.&lt;/p&gt;&lt;hr&gt;&lt;b&gt;Trending stories at &lt;a href="http://www.newsy.com"&gt;Newsy.com&lt;/a&gt;&lt;/b&gt;&lt;ul class="inline-related-links"&gt;&lt;li&gt;&lt;a href="http://www.newsy.com/videos/the-maine-governor-s-voicemail-saga-explained/"&gt;The Maine Governor&amp;#039;s Voicemail Saga Explained&lt;/a&gt;&lt;/li&gt;&lt;li&gt;&lt;a href="http://www.newsy.com/videos/steven-avery-s-attorney-thinks-she-can-free-him/"&gt;Steven Avery&amp;#039;s Attorney Is Pretty Good At Getting People Out Of Prison&lt;/a&gt;&lt;/li&gt;&lt;li&gt;&lt;a href="http://www.newsy.com/videos/pentagon-s-head-tester-has-concerns-over-f-35-fighter-jet/"&gt;The Pentagon&amp;#039;s Weapons Tester Is Concerned About The F-35 Fighter Jet&lt;/a&gt;&lt;/li&gt;&lt;/ul&gt; 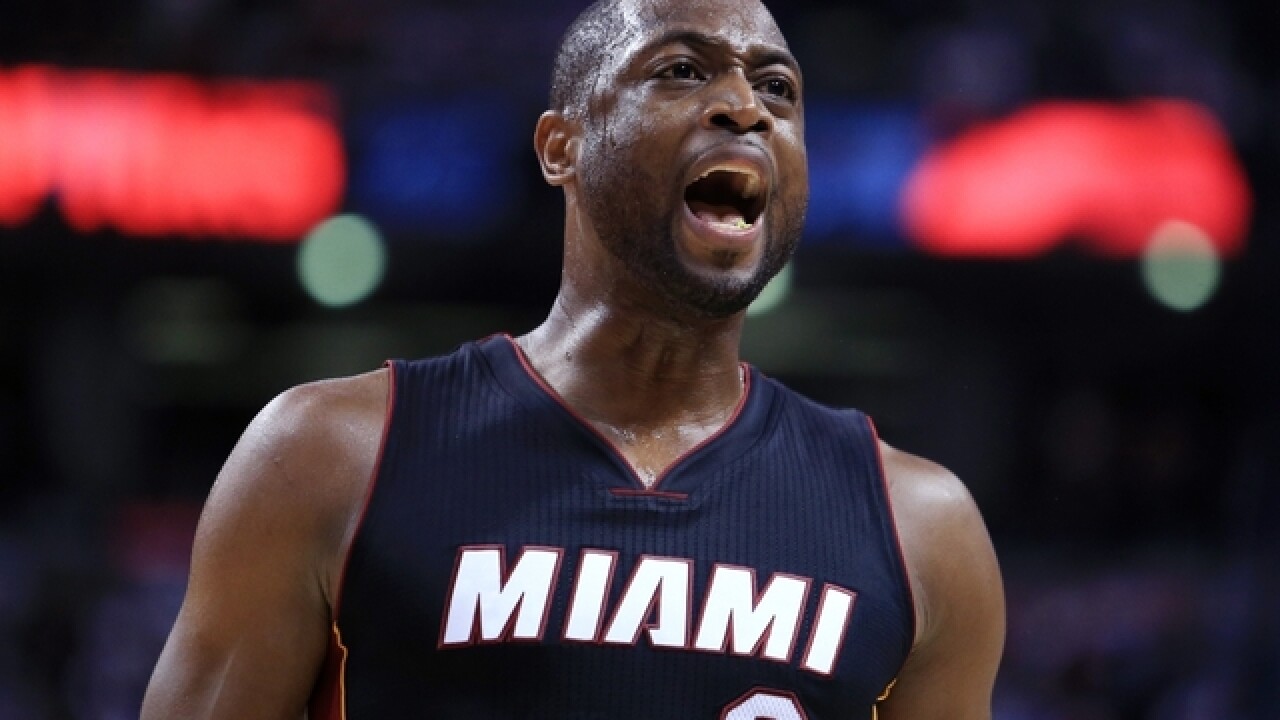 CHICAGO (AP) — NBA star Dwyane Wade's cousin was shot and killed in Chicago while pushing her baby in a stroller near a school where she intended to register her children. Wade lamented on Twitter what he called another "act of senseless gun violence."

Nykea Aldridge, 32, had recently relocated to an area on the city's South Side, her family said.

On Friday, Aldridge was near the school, which is about a mile and a half southwest of the University of Chicago, when two males walked up and fired shots at a third man but hit Aldridge in the head and arm. She wasn't the intended target, police said.

Police are questioning witnesses in the shooting but had no suspects in custody.

Wade, a native of Chicago who signed with the Chicago Bulls in July after 13 years with the Miami Heat, posted Friday on Twitter: "My cousin was killed today in Chicago. Another act of senseless gun violence. 4 kids lost their mom for NO REASON. Unreal. #EnoughIsEnough." On Saturday, he again tweeted: "RIP Nykea Aldridge...#EnoughIsEnough."

My cousin was killed today in Chicago. Another act of senseless gun violence. 4 kids lost their mom for NO REASON. Unreal. #EnoughIsEnough

Chicago has been plagued by gun violence for years, especially in a few South and West Side neighborhoods. This July alone, there were 65 homicides — the most that month since 2006.

A day earlier, Wade had participated via satellite in a town hall meeting in Chicago on gun violence hosted by ESPN, along with his mother, pastor Jolinda Wade. Dwyane Wade's charitable organization, Wade's World Foundation, does community outreach in the Chicago area.

Wade also tweeted Saturday morning: "The city of Chicago is hurting. We need more help& more hands on deck. Not for me and my family but for the future of our world. The YOUTH!" adding in a following tweet, "These young kids are screaming for help!!! #EnoughIsEnough."

Outside the emergency room where Aldridge was pronounced dead, Jolinda Wade clutched her sister and spoke for the family as mourners stood in a circle holding hands and praying. She said she'd participated in the ESPN town hall meeting "never knowing that the next day we would be the ones that would actually be living and experiencing it."

It is not the first time Dwyane Wade's family in Chicago has been affected by gun violence. His nephew, Darin Johnson, was shot twice in the leg on the South Side in 2012 but recovered.

Chicago had recorded 381 homicides by the end of July, up 30 percent from the same period of 2015. Its murder rate is higher than the more populous cities of New York and Los Angeles.

Republican presidential candidate Donald Trump has spoken about the city's violence , and used Aldridge's death as a chance to tweet about it Saturday morning. He posted: "Dwayne (sic) Wade's cousin was just shot and killed walking her baby in Chicago. Just what I have been saying. African-Americans will VOTE TRUMP!"

Dwyane Wade's cousin was just shot and killed walking her baby in Chicago. Just what I have been saying. African-Americans will VOTE TRUMP!

Family members are caring for Alridge's baby, who wasn't hurt.