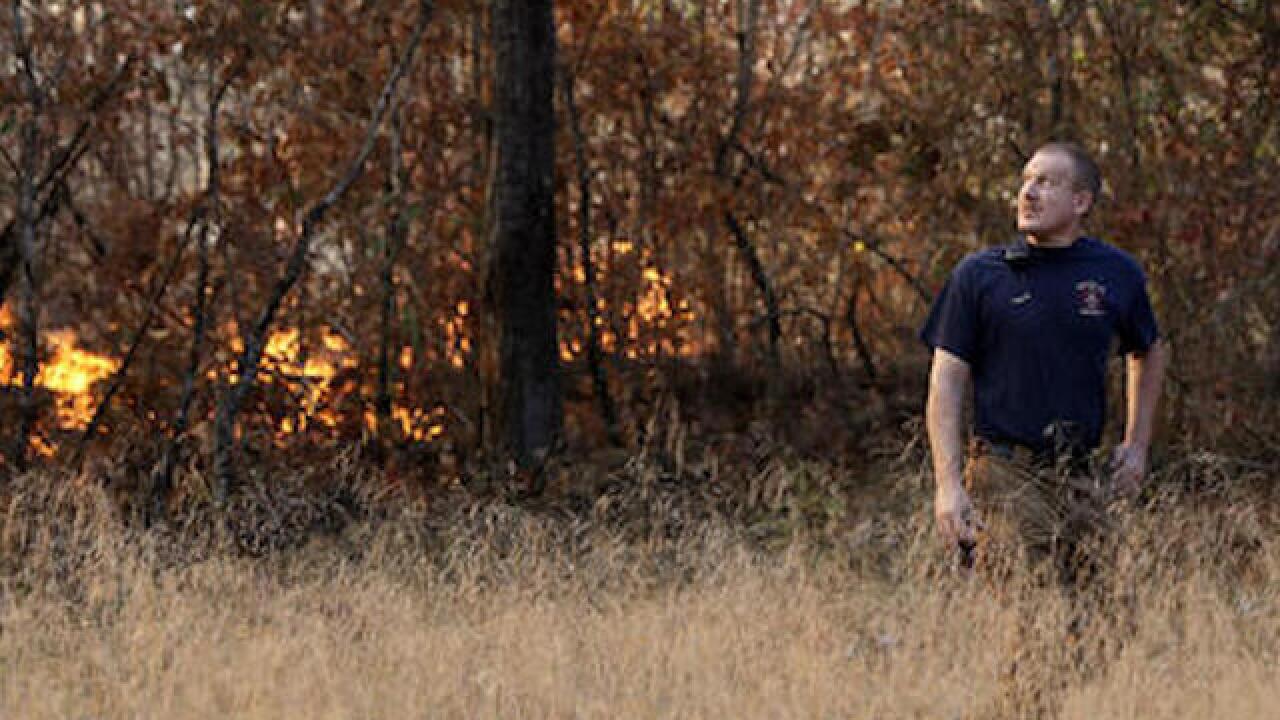 ATLANTA (AP) — Many of the nation's largest active wildfires have been burning in the southern Appalachian mountains, where a relentless drought has turned pine trees into torches and forced evacuations in dozens of communities.

More than 5,000 firefighters and support staff from around the nation have poured into the Southeast to try to suppress these fires, Shardul Raval, director of fire and aviation management for the southern region of the U.S. Forest Service, said Thursday.

The effort includes about 40 aircraft, including three large air tankers flying out of Chattanooga, Tennessee. Tens of thousands of acres of forest have burned and about a dozen of the largest fires were uncontained, the forest service said.

High winds and temperatures and weeks without rain have combined to spark blaze after blaze in the unusually dry landscape. Numerous teams reported wind-driven fires racing up slopes and down ravines as they struggled to protect hundreds of threatened structures.

"It just smells like a campfire" along the Appalachian Trail in north Georgia, said Carlie Gentry, who works at the Mountain Crossings store at Walasi-yi, a popular stop for hikers.

"For weeks up here we've been having smoke, but it is getting more intense for sure," Gentry said. Typically, the view stretches for miles, she said. Now, "you can hardly see to the next ridge."

Thursday's national drought report shows 41.6 million people in parts of 15 Southern states living in drought conditions. The worst is in Georgia, Alabama, Mississippi and Tennessee, but extreme drought also is spreading into the western Carolinas. Kentucky, Tennessee and North Carolina all have fierce fires.

"Right now we're kind of holding our own," said Jennifer Turner, a spokeswoman for the Kentucky's state Division of Forestry. "We've been able to get control over some of the smaller fires."

But with humidity so low in the normally lush Appalachians and Great Smoky Mountains, authorities are bracing for more. North Carolina's Gov. Pat McCrory declared a state of emergency for a fourth of his state's 100 counties, to help with evacuations and provide more firefighting assets.

More than 560 firefighters and staff from at least 40 states were battling 18 blazes in the Nantahala National Forest in western North Carolina, and state climatologist Rebecca Ward said some counties are having one of their driest years in 105 years of record-keeping.

"Additional crews, engines, helicopters and air tankers continue to arrive from all across the country to help with the firefighting effort," fire managers told residents Thursday.

Kentucky authorities made two arson arrests and cited another man for causing a brush fire by defying a burn ban. Tennessee authorities also reported arrests for arson and burning violations.

Smoke blowing southward has blanketed Atlanta and other cities in haze.

Alabama extended its ban throughout the state, where drought is choking 80 percent of the land, drying up streams and lakes and turning plants to tinder. Firefighters in Alabama have battled more than 1,100 fires that have charred nearly 12,000 acres in the last month.

Tuscaloosa and Birmingham have both tied or broken records for days without measurable rain; neither has had more than sprinkles since late September. And Noccalula Falls, a popular attraction on Lookout Mountain in northeast Alabama, has been bone dry for weeks.

"The creek is dry. There's not even a trickle going over the falls," campground manager Kaila Fair said.

One of the largest blazes was spreading rapidly in the Cohutta Wilderness area just south of the Georgia-Tennessee line. Nearly 300 people are battling that fire, which already consumed 10,000 acres, the Forest Service said.

In the hills outside Chattanooga, firefighters were trying to save homes on both Signal Mountain and Mowbray Mountain. They may get reinforcements: The Federal Emergency Management Agency said it would reimburse most of one fire's costs after a request from Tennessee.

Dai Harris, 29, was staying in a local firehouse after being evacuated from his home near Mowbray Mountain. "There's a lot of smoke, and it's covering a broad area, so I assume there's still quite a bit of flames out there," he said.

"I'm getting very concerned, mainly for my neighbors," Harris said. "I'm concerned about their houses now. I'm afraid they're not going to come home to one."

Winds are expected to strengthen in the short term, "so we may see some increases in activity over the weekend," Raval said.

Drought conditions also are persisting in parts of the Florida panhandle and portions of Virginia, Louisiana, Mississippi, Texas, Oklahoma, Arkansas, Indiana and Missouri, according to the Drought Monitor from the National Drought Mitigation Center at the University of Nebraska-Lincoln.