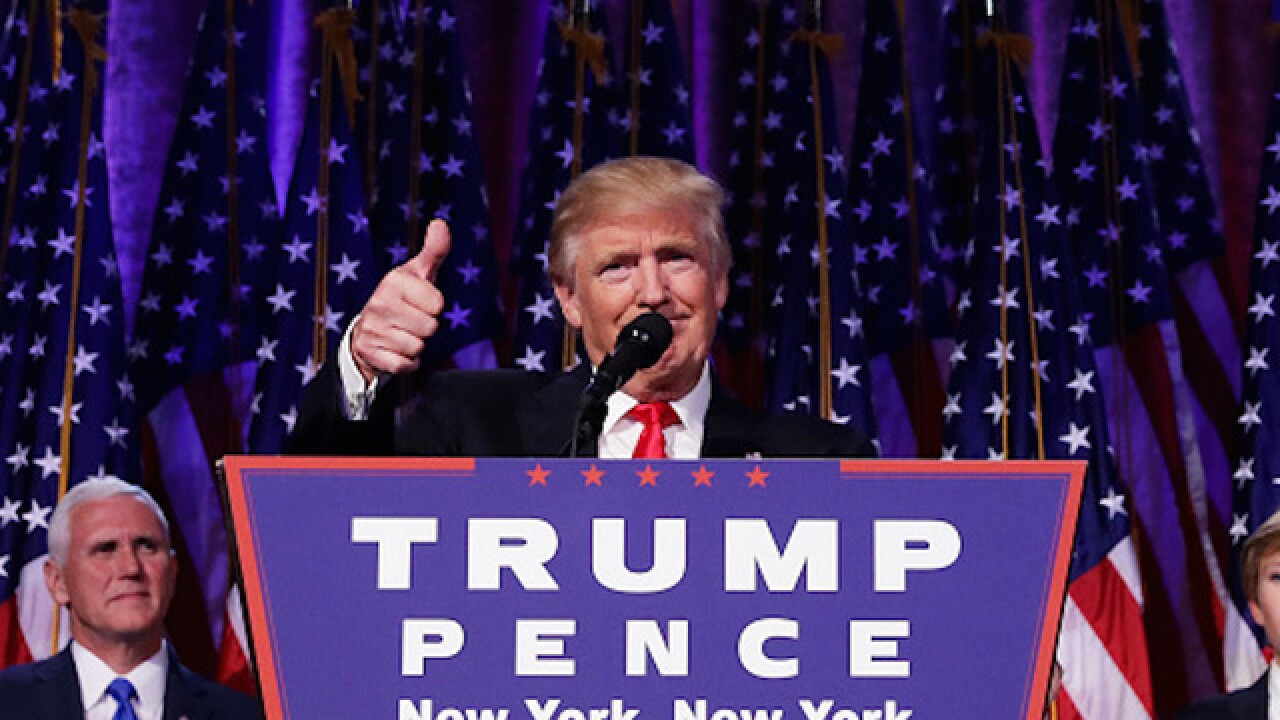 &lt;p&gt;NEW YORK, NY - NOVEMBER 09: Republican president-elect Donald Trump gives a thumbs up to the crowd during his acceptance speech at his election night event at the New York Hilton Midtown in the early morning hours of November 9, 2016 in New York City. Donald Trump defeated Democratic presidential nominee Hillary Clinton to become the 45th president of the United States. (Photo by Chip Somodevilla/Getty Images)&lt;/p&gt;

The tough-talking New York billionaire claimed victories in the nation's premier battleground states, but his appeal across the industrial Midwest — Pennsylvania and Wisconsin, in particular — sealed a victory that defied pre-election polls and every expectation of the political establishment.

"I say it is time for us to come together as one united people," Trump told supporters gathered in a Manhattan hotel near his Trump Tower campaign headquarters.

"For those who have chosen not to support me in the past, of which there were a few people, I'm reaching out to you for your guidance and your help so we can work together and unify our great country," he said, the stage crowded with family and his most loyal allies.

Trump addressed the nation after sweeping most of the nation's top battlegrounds — and created some new ones.

He won Ohio, Florida and North Carolina. He also took down the Democratic Party's "blue firewall" by scoring victories in Pennsylvania and Wisconsin, states that haven't supported a Republican presidential candidate since 1988 and 1984 respectively.

Trump's win shocked political professionals and global financial markets alike. But it created pure joy inside the hotel ballroom where hundreds of Trump supporters waited for hours for his celebration speech. They hugged each other, chanted "USA!" and bellowed "God bless America" at the top of their lungs.

"We are eager to work hand-in-hand with the new administration to advance an agenda to improve the lives of the American people," Ryan, who had a rocky relationship with Trump at times, said in a statement. "This has been a great night for our party, and now we must turn our focus to bringing the country together."

While Democrat Hillary Clinton was trying to make history as the first female president, Trump made a different kind of history as one of the least experienced presidential candidates ever elected.

A businessman and former reality TV star, he is a true political outsider in a way that marks a sharp break from past presidents.

Some were branded resume lightweights: ex-governors George W. Bush of Texas, Bill Clinton of Arkansas and Ronald Reagan of California, among them. But they had served somewhere — whether in Congress, states or in a leadership post in an administration.

His political inexperience allowed him to cast himself as a change agent just as frustrated voters in both parties were hungry for change. The message was particularly effective against Clinton, a fixture in public service over the last three decades.

Ever the showman, his strategy relied almost exclusively on massive rallies to connect with voters, ignoring the grunt work that typically fuels successful campaigns.

Pre-election polls suggested he was the least popular presidential nominee in the modern era.

Yet there were signs that Republicans who previously vowed never to support Trump were willing to give him a chance moving forward.

"If Trump wins, he does deserve the benefit of the doubt because he was right on his chances and so many of us were wrong," tweeted conservative leader Erick Erickson.