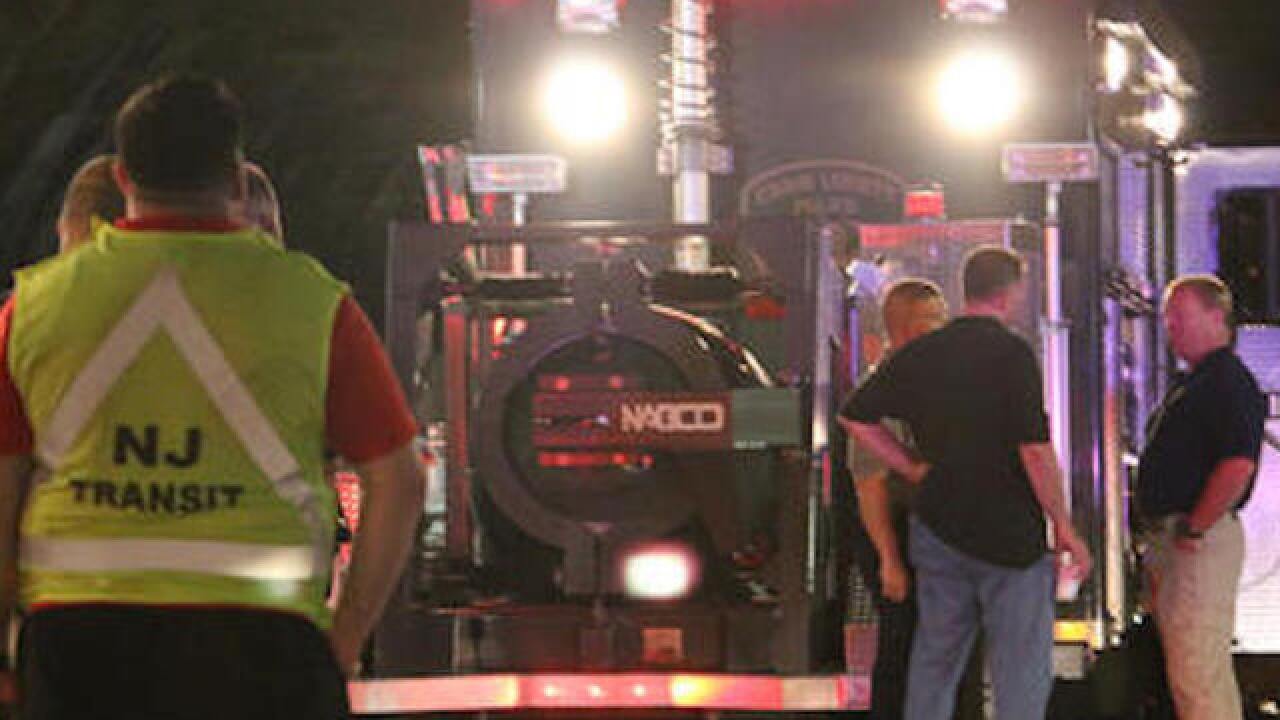 Copyright Associated Press
&lt;p&gt;Authorities were using a robot to investigate a suspicious backpack underneath the train tracks at the Elizabeth train station when a device inside the backpack exploded. (Jessica Remo / NJ Advance Media for NJ.com via AP)&lt;/p&gt;

ELIZABETH, N.J. (AP) — A suspicious device found in a trash can near a train station exploded early Monday as a bomb squad was attempting to disarm it with a robot, officials said.

Elizabeth Mayor Christian Bollwage said the FBI was working to disarm one of five devices found in the same bag in a trash can by two men at around 8:30 p.m. Sunday near the Elizabeth train station. The men had reported seeing wires and a pipe coming out of the package, Bollwage said.

There was no immediate report of injuries or damage. The mayor warned that other explosions were expected.

Armed with a search warrant, FBI agents and police converged on an apartment above a fried chicken restaurant near the train station before 6 a.m. Monday. The apartment is linked to a man wanted for questioning in Saturday night's New York City bombing, which injured 29.

Ahmad Khan Rahami, 28, has lived at that address. He is a naturalized citizen from Afghanistan, the FBI said.

New Jersey Transit service trains resumed service on the Northeast Corridor and North Jersey Coast Line at 5:30 a.m. Monday, but they faced residual delays because service was suspended after the devices were found.

Amtrak was operating on a modified schedule.

Train passengers reported being stuck on Amtrak and NJ Transit trains for hours Sunday night, while some trains moved in reverse to let passengers off at other stations. Amtrak said 2,400 passengers were affected and trains were being brought in to other stations for people to get other transportation.

It wasn't clear when the Elizabeth station would be open, a threat to cause major issues on the Monday morning commute into New York.

The discovery of the suspicious package came a day after the explosion in Manhattan and an unexploded pressure-cooker device was found four blocks away in New York City. Also Saturday, a pipe bomb exploded about an hour from the Elizabeth train station in Seaside Park, New Jersey, forcing the cancellation of a military charity 5K run.

Investigators didn't immediately comment on whether they thought the Elizabeth incident was connected to either of the two blasts.

Bollwage said that he wasn't willing to say that Elizabeth had become a target and that it was possible that someone worried about the authorities was trying to get rid of the package.