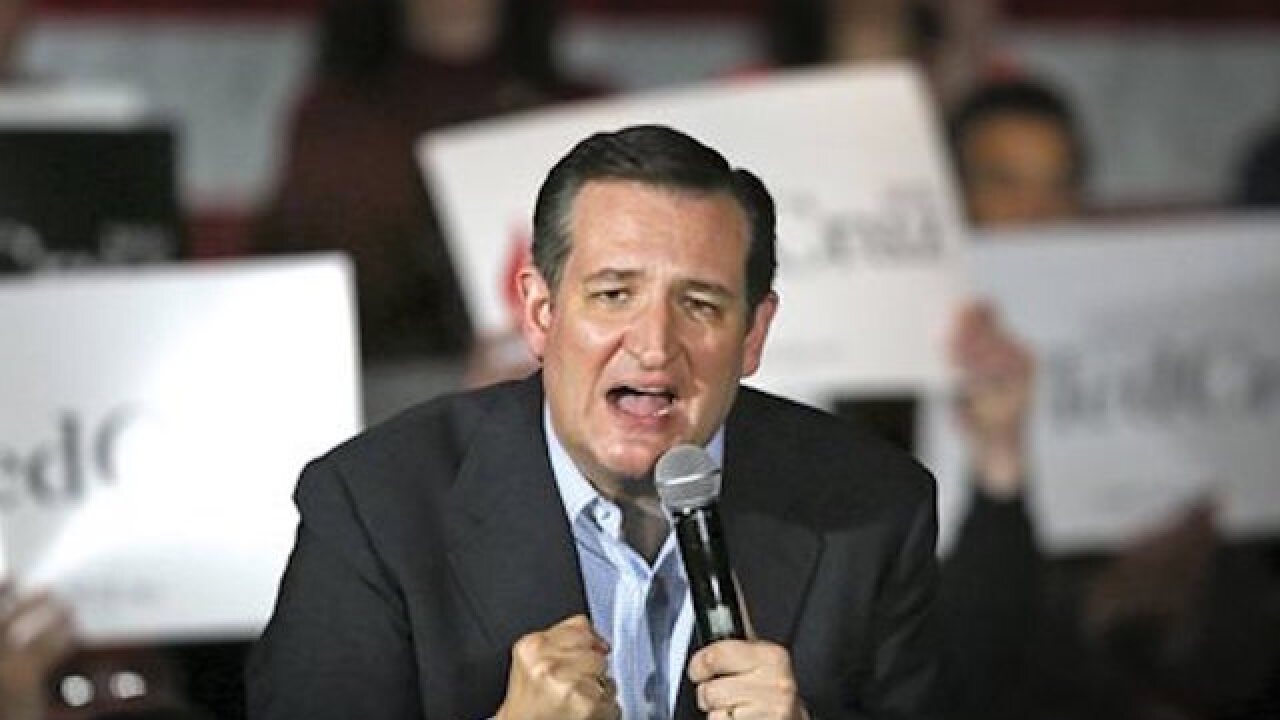 OSHKOSH, Wisconsin (AP) — Donald Trump is planning to make his first campaign visit to Wisconsin on Tuesday, where the upcoming Republican presidential primary could mark a turning point in the unpredictable GOP race.

But rival Ted Cruz has gotten a head-start on the contest, racking up influential endorsements, campaigning in key regions and supported by bullish advertising campaign.

A solid Cruz win in Wisconsin would narrow Trump's path to the nomination, heap pressure on the billionaire to sweep the remaining winner-take-all primaries this spring, and increase the chances of a contested party convention in July.

"The results in Wisconsin will impact significantly the primaries to come," Cruz told The Associated Press after a rally in Oshkosh Friday. "Wisconsin, I believe, will play a critical role continuing to unify Republicans behind our campaign. The only way to beat Donald Trump is with unity."

Cruz is positioning himself to win Wisconsin, next Tuesday's only contest, and the first primary since he began collecting the backing of establishment Republicans, such as former Florida Gov. Jeb Bush, adamant about eliminating Trump.

As Cruz campaigned across the state ahead of the Easter holiday, he was following a winning roadmap drawn by Wisconsin governor — and former 2016 presidential hopeful — Scott Walker in 2010, up Wisconsin's rural and working-class midsection —the same demographic that has driven Trump's success thus far.

Cruz has mined the GOP vote-rich swath of farms and factories from south-central Wisconsin, up the Fox River Valley's corridor of paper mills, small towns — among them, some of the most swing-prone counties in the country.

The Fox River Valley, suburban Milwaukee and the rural counties outside Madison are home to 75 percent of Wisconsin's most reliable Republican primary voters, said Keith Gilkes, a veteran Walker adviser who worked for his 2010 GOP primary campaign.

"How Gov. Walker won was basically by winning the lower Fox Valley down through the Southeast," Gilkes said. "That's the holy grail demographically for the Republican Party in Wisconsin."

Trump has slightly fewer than half of the Republican delegates allocated so far, short of the majority needed to clinch the nomination before the party's national convention this summer. Cruz has more than a third of the delegates, but is focused equally on stopping Trump and uniting most of the party against him.

If Cruz wins most of the 42 delegates — which, in Wisconsin, are allocated on the basis of state and congressional district winners — then the remaining winner-take-all contests, in Delaware, Montana, Nebraska, New Jersey and North Dakota could determine the future of this competition. A solid Cruz win in Wisconsin would likely require Trump to win those five contests to avoid clawing for the nomination at the party's national convention in Cleveland.

With that in mind, Cruz and his wife Heidi campaigned last week in Waukesha County just west of Milwaukee, where expensive homes now occupy ground dairy herds once ruled. He appeared at a conservative conference with influential radio host Charlie Sykes, a vocal Trump opponent who has a loyal suburban following and has endorsed Cruz.

Cruz then pivoted, from the national security and values-minded suburban voters, to the economic frustrations of more working-class voters in onetime industrial hub Janesville in south central Wisconsin.

"I want to take a minute here and I want to talk to all the single moms who are working two and three part-time jobs," Cruz told more than 400 people Thursday.

Cruz rebuked Trump's criticism of Heidi Cruz, a detour from policy to personal that received sharp condemnation from some voters.

Truda Swanson of Appleton, an undecided Republican primary voter, said Trump's personal criticism of Cruz's wife in the lead-up to the primary reinforced her opposition to Trump.

It reinforced warning signs for Trump in Wisconsin, who led in a February poll by Marquette University's Law School, but is now viewed unfavorably by 45 percent of Wisconsin Republicans, according to the same poll.

Cruz stuck to the blue-collar message on Friday in Oshkosh, an area surrounded by rural counties with some of the highest unemployment rates in the state.

But he struck just as hard at Trump, whose support nationally draws heavily from blue collar voters, blasting Trump's call for a 45 percent tariff on Chinese imports.

"People are struggling already, and you want to jack up the cost of living by 45 percent?" Cruz asked hypothetically in Oshkosh

Cruz's campaign was airing about $500,000 in advertising over the final two weeks before the primary — a sharp contrast to Trump, who aired no commercials in the state. The anti-tax group Club for Growth announced its plans to spend $1 million on pro-Cruz ads, while an anti-Trump group was spending roughly $340,000 in the final two weeks.

Ohio Gov. John Kasich has also visited Wisconsin, and is advertising in the state as is a group that supports him. However, polls show him trailing both Trump and Cruz.

"Ted Cruz has a real opportunity to win the state, in a way that would be pretty resounding," said Mark Graul, an unaffiliated Republican strategist from Green Bay.