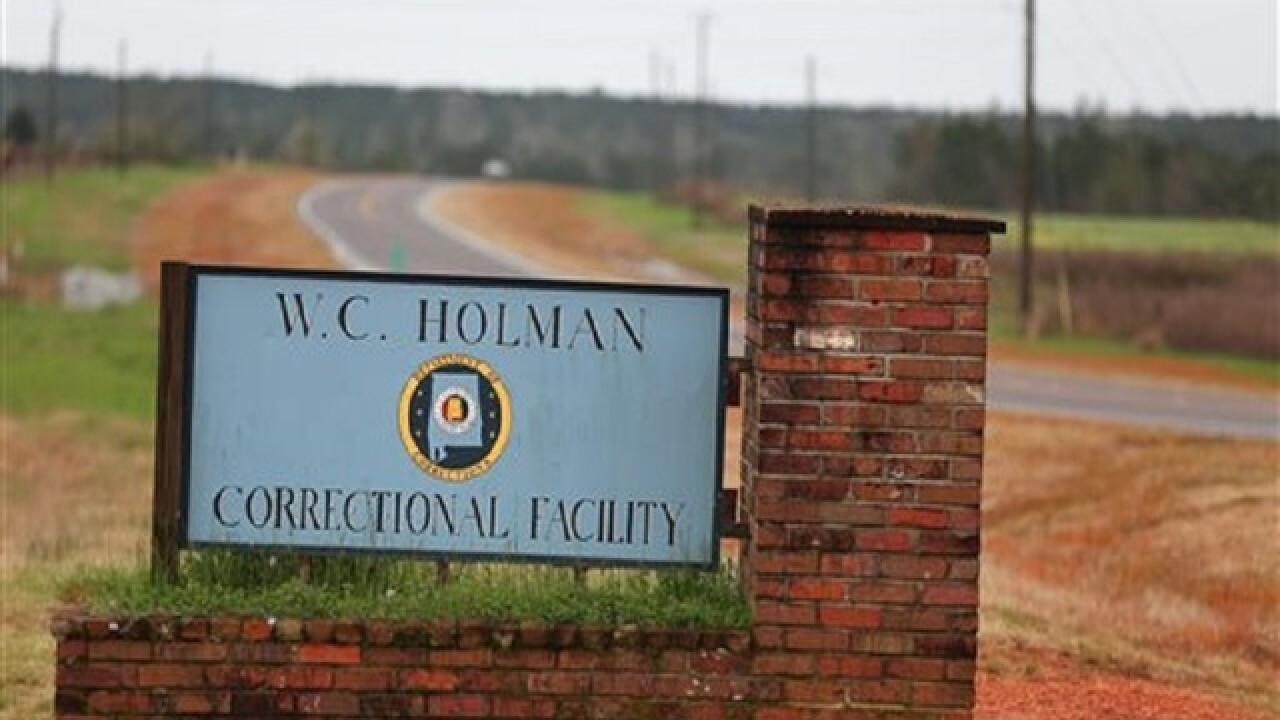 &lt;p&gt;FILE -In this Saturday March 12, 2016 file photo, the sign to The William C. Holman Correctional Facility in Atmore, Ala., is displayed. A prisoner has stabbed a fellow inmate and 70 prisoners have barricaded themselves in a dorm at an Alabama prison that was the site of weekend uprisings. The uprising was the second in three days at the prison, which was still on lockdown after inmates stabbed the prison warden and a corrections officer, lit fires and tried to take over a dormitory on Friday. (Sharon Steinmann/AL.com via AP, File)&lt;/p&gt;

By: Associated Press
Posted at 12:00 AM, Mar 15, 2016
MONTGOMERY, Ala. (AP) — Dozens of inmates barricaded themselves inside a dormitory at an Alabama prison for more than four hours Monday until authorities were finally able to regain control in what marked the second violent uprising in the same area of the overcrowded correctional facility in three days.
The disturbance began Monday morning when a prisoner stabbed another inmate at the William C. Holman Correctional Facility in Atmore, about 50 miles north of Mobile, said Alabama Department of Corrections spokesman Bob Horton. When corrections officers tried to apprehend the suspect, inmates became violent and barricaded themselves inside the dorm, Horton said in an emailed statement. He said 70 inmates were in the dorm at the time, but it was unclear how many were involved in the uprising, which began at 10 a.m.
An emergency response team entered the dorm about 2:45 p.m. Monday and regained control of the area of the prison, he said.
Horton said Monday's violence occurred in the same dorm where, on Friday night, Holman inmates stabbed Warden Carter Davenport and a corrections officer and lit fires and then shot video of the melee with contraband cellphones.
Emergency response teams had brought the first situation under control by Saturday morning, but the prison was still locked down Monday when the latest uprising broke out.
Monday's disturbance marked the third incidence of violence within a week in the state's troubled prison system, which has come under criticism for overcrowding and low staffing levels. An officer was stabbed last week at another Alabama prison.
"You don't have enough officers to monitor this many inmates. This is going to continue," said Sen. Cam Ward, chairman of the legislative prison oversight committee.
Alabama prisons in December housed more than 24,282 inmates in facilities originally designed to hold 13,318, according to monthly statistics from the Department of Corrections. There were 830 prisoners housed at Holman, which was originally designed to hold 581 inmates.
Alabama Gov. Robert Bentley announced plans to visit the facility on Tuesday.
Bentley is asking legislators to approve an $800 million bond issue to build four new, large prisons and shutter most existing facilities.
Video that was apparently shot Friday night from inside the prison by an inmate with a contraband cellphone shows inmates starting a fire at the end of the dormitory. "It is going down," said the inmate on the expletive-filled video after talking about the stabbings of the warden and officer. The Department of Corrections confirmed that some inmates inside the prison were able to publish photos of the disturbance using social media.
During a search of the prison after Friday's uprising was contained, corrections officers found 30 cellphones, makeshift knives and other contraband, Horton said.
Copyright 2016 The Associated Press. All rights reserved. This material may not be published, broadcast, rewritten or redistributed.