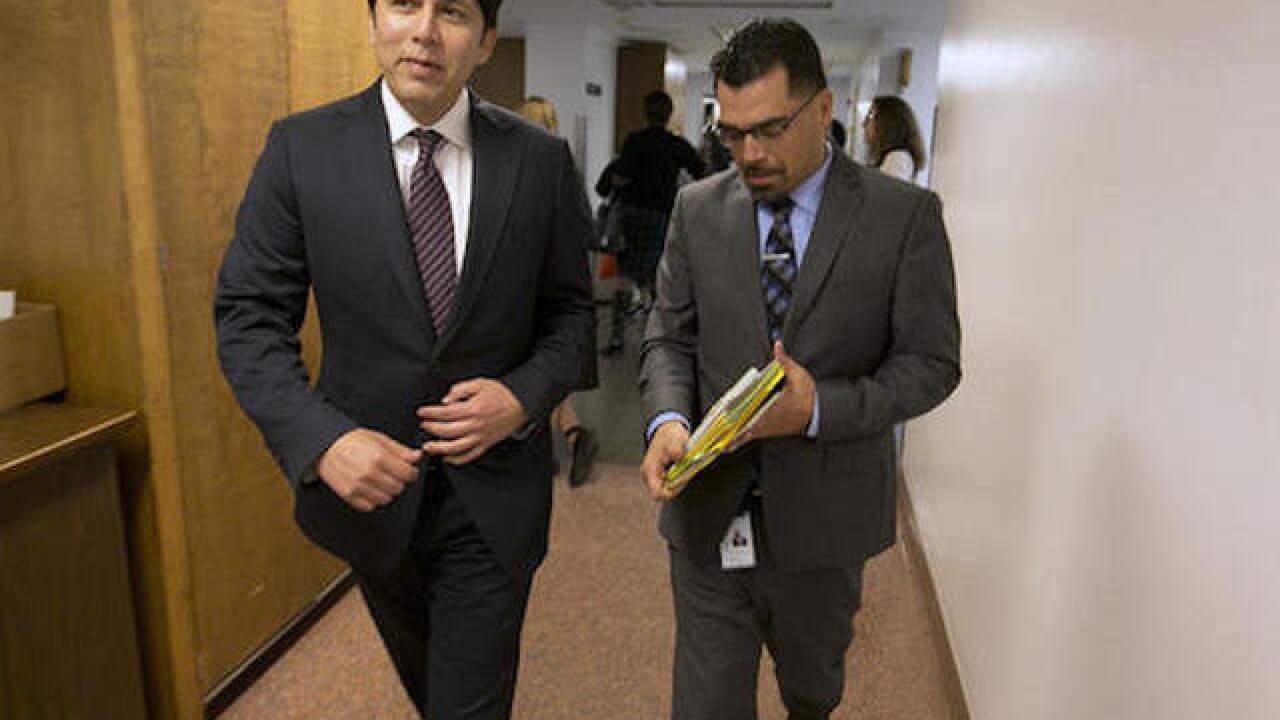 Copyright Associated Press
&lt;p&gt;After the state Assembly approved a bill to raise the state's minimum wage, David Garcia, right,assistant chief clerk of the Assembly, carries the bill to the Senate accompanied by Senate President Pro Tem Kevin de Leon, D-Los Angeles, Thursday, March 31, 2016, in Sacramento, Calif. The bill SB3, to gradually raise California's minimum wage to a nation leading $15 an hour by 2022, passed by a 48-26 vote and sent to the Senate.(AP Photo/Rich Pedroncelli)&lt;/p&gt;

LOS ANGELES (AP) — California and New York acted Monday to gradually push their statewide minimum wages to $15 an hour — the highest in the nation — as Hillary Clinton and Bernie Sanders again seized on wage disparity and the plight of the working poor in their fight for the Democratic presidential nomination.
Clinton joined New York Gov. Andrew Cuomo at a raucous rally in Manhattan as he signed the law that will gradually boost that state's pay rate. The former first lady predicted the movement will "sweep our country."
Sanders said in a statement that his campaign is about building on the steps in California and New York "so that everyone in this country can enjoy the dignity and basic economic security that comes from a living wage."
The new laws in California and New York mark the most ambitious moves yet by legislatures to close the national divide between rich and poor. Experts say other states may follow, given Congress' reluctance to act despite entreaties from President Barack Obama.
In a statement, Obama commended California and again urged Congress to raise the federal minimum wage. "It's time for Congress to step up and do what is right for every hard-working American and for our economy," he said.
In Los Angeles, Gov. Jerry Brown was cheered by union workers — some chanting in Spanish — as he signed a bill into law that will lift the statewide minimum wage to $15 an hour by 2022.
The bill's effects could vary widely in the vast and diverse state, from sparsely populated mountain and desert areas to inner city Los Angeles and wealthy Silicon Valley.
While it was a victory for those struggling on the margins of the economy and the politically powerful unions that pushed it, business groups warned that the higher wage could cost thousands of jobs as employers are forced to provide steadily bigger paychecks.
A $15 base wage will have "devastating impacts on small businesses in California," Tom Scott, executive director of the state branch of the National Federation of Independent Business, said in a statement. "Ignoring the voices and concerns of the vast majority of job creators in this state is deeply concerning and illustrates why many feel Sacramento is broken."
The bill was pushed through the Legislature by Democrats — who control both chambers — without a single Republican vote. A nonpartisan legislative analysis put the cost to California taxpayers at $3.6 billion a year in higher pay for government employees.
Brown, a Democrat, never specifically addressed criticism of the bill but argued the decision to set the nation-leading wage was about "economic justice."
"Economically, minimum wages may not make sense," the governor said. "But morally and socially and politically they make every sense, because it binds the community together and makes sure that parents can take care of their kids in a much more satisfactory way."
The California bill will bump the state's $10 hourly minimum by 50 cents next year and to $11 in 2018. Hourly $1 raises will then come every January until 2022, unless the governor imposes a delay during an economic recession. Businesses with 25 or fewer employees have an extra year to comply.
Wages will rise with inflation each year thereafter.
Brown negotiated the deal with unions to head off competing labor-backed ballot initiatives that would have imposed swifter increases.
About 2.2 million Californians now earn the minimum wage, but University of California, Irvine, economics professor David Neumark estimated the boost could cost 5 to 10 percent of low-skilled workers their jobs.
Brown has said California, with the world's eighth largest economy, can absorb the raises without the problems predicted by opponents.
California and Massachusetts currently have the highest statewide minimum wage at $10. Washington, D.C., stands at $10.50. Los Angeles, Seattle and other cities have recently approved $15 minimum wages, while Oregon officials plan to increase the minimum to $14.75 an hour in cities and $12.50 in rural areas by 2022.
New York's state budget includes gradually raising the $9 minimum wage to $15, starting in New York City in three years and phasing in at a lower level elsewhere. An eventual statewide increase to $15 would be tied to economic indicators such as inflation.
Sanders has made the $15 wage a foundation block of his candidacy, while Clinton backs Senate legislation that would enact a federal minimum wage of $12 an hour, with the ability of individual cities and states to set a higher threshold.
Copyright 2016 The Associated Press. All rights reserved. This material may not be published, broadcast, rewritten or redistributed.