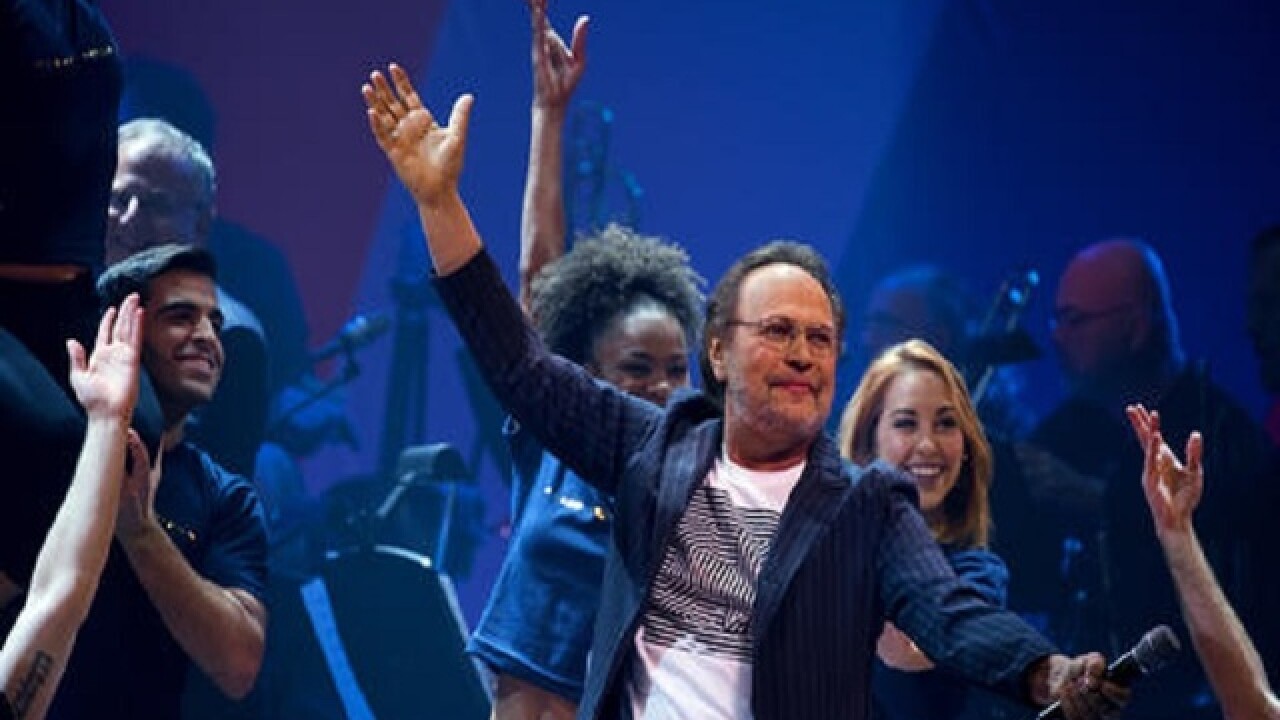 NEW YORK (AP) — Stars of Hollywood and Broadway — including Julia Roberts, Jake Gyllenhaal, Sarah Jessica Parker, Matthew Broderick, Hugh Jackman, Emily Blunt, Neil Patrick Harris and Helen Mirren — put on a splashy fundraiser for Hillary Clinton.
The Democratic candidate could only address the group via a video message Monday evening. But daughter Chelsea and husband, Bill, were present at the sold-out event at the 1,300 seat St. James Theatre. Billy Crystal was host and Barbra Streisand lent her recorded voice to the show.
"What is at stake in this election is the future that we want our children to grow up in and whether or not we are going to have a country that we all can be proud of because all of us can be ourselves," Chelsea Clinton said.
Bill Clinton called his wife "the single-best changemaker I've ever known." He added: "It is not true that our best days are behind us. It is not true — unless we give it up. Don't give it up. Grab it."
The event alternated performances with readings or short speeches. Angela Bassett recited a Sojourner Truth speech, Mirren read one by Eleanor Roosevelt and Julia Roberts read a column by Molly Ivins.
Joel Grey and Sienna Miller sang "Wilkommen" from "Cabaret," Parker and Andrea McArdle belted out "Tomorrow" from "Annie," Anne Hathaway and Kelli O'Hara sang a tuneful medley of "Get Happy" and "Happy Days Are Here Again," and Sara Bareilles sang her hit "Brave."
Jon Hamm and Jake Gyllenhaal teamed up to perform a bit of Sinclair Lewis's play "It Can't Happen Here," Alan Cumming spoke about LGBT rights, Lena Dunham recited part of Hillary Clinton's concession speech in 2008 and new Tony Award-winner Cynthia Erivo closed the show with a gospel-tinged "Battle Hymn of the Republic."
Crystal kicked off the night by cracking that it was the greatest collection of Broadway and Hollywood stars since liberal-leaning producer "Harvey Weinstein's daughter's bat mitzvah."
Crystal then launched into a version of "Comedy Tonight" from the musical "A Funny Thing Happened on the Way to the Forum" — renamed "Hillary Tonight" — with the lyrics: "No racist baiting/No Muslim hating/Pantsuits for everyone/It's Hillary tonight!"
Donald Trump was a constant target for Crystal, who at one point compared the Republican candidate to hurricane season: "Think about it: It starts with a lot of hot air spinning out of control. It hits America, causes a lot of damage and panic. But it's completely over by November."
Many of the songs were picked to tweak Trump, including one from "How to Succeed in Business Without Really Trying," and "Children Will Listen" from Stephen Sondheim's "Into the Woods," sang by Bernadette Peters with a children's' choir.
Other performances included Josh Groban singing "Over the Rainbow," Stephen Schwartz and Kelli O'Hara dueting on "For Good" from "Wicked," Harris reprised his Tony-winning title turn in "Hedwig and the Angry Inch" with a powerful rendition of "Origin of Love."
Tickets ranged from $45 in the rear balcony to $2,700 premium orchestra seats, with bundles of top tickets plus access to a post-event party going for $5,000. It was streamed live on Clinton's Facebook page.
A few protesters — one holding a "Clinton 4 Jail" sign — stood across the street under the marquee for "The Phantom of the Opera." Inside the Clinton event theater, which usually houses the musical "Something Rotten!,"many performers wore pro-Hillary T-shirts and at least one attendee wore a glittery "I'm With Her" top.
Toward the end of the 2½-hour show, Lin-Manuel Miranda and Renée Elise Goldsberry, the Tony-winning stars of the Broadway phenomenon "Hamilton," took the stage for a riotous rap based on the song "The World Was Wide Enough" — "I have only one overwhelming feeling," they asked. "Anybody here want to shatter a glass ceiling?"
Copyright 2016 The Associated Press. All rights reserved. This material may not be published, broadcast, rewritten or redistributed.