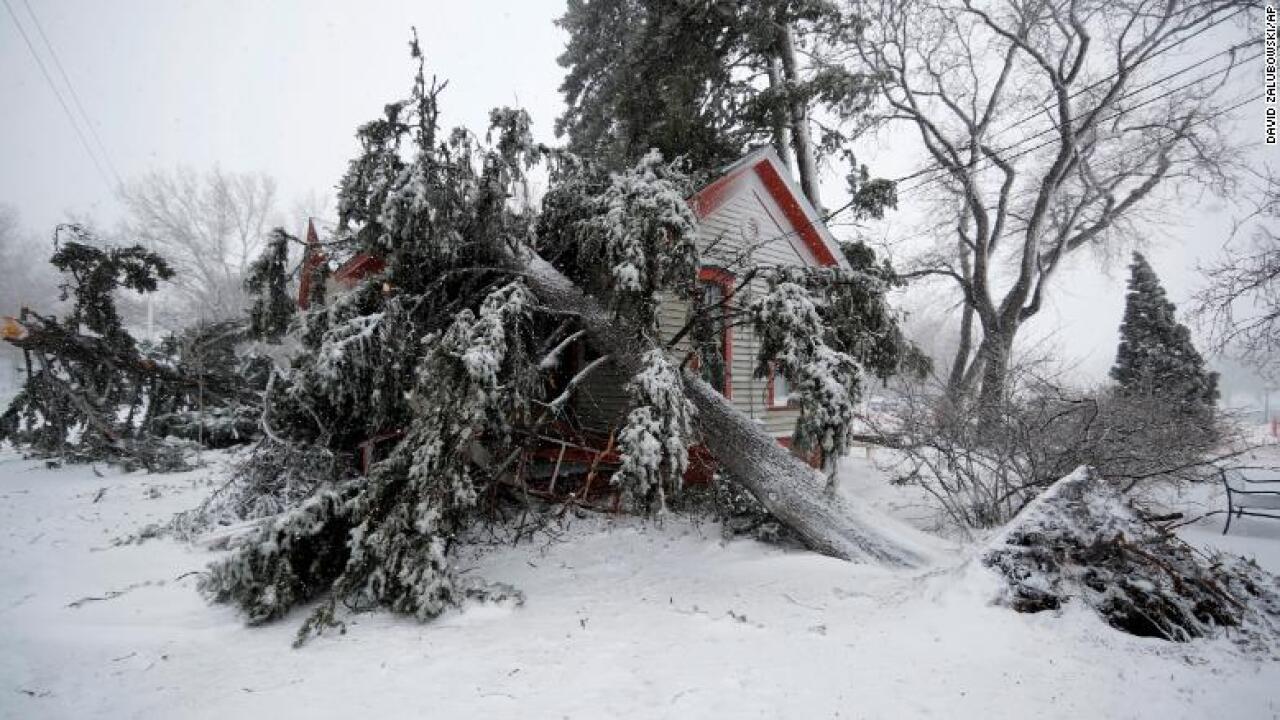 Nearly 3,100 flights have been canceled over two days as a "bomb cyclone" makes its way across parts of the country, unleashing blizzard conditions and hurricane-force winds.

More than 2,000 flights were canceled Wednesday and an additional 1,021 had been dropped by the early morning Thursday, according to data from Flightaware.com.

Most of the cancellations are at Denver International Airport where all runways were closed Wednesday because of icy conditions and extremely poor visibility caused by the intense winter storm, the airport tweeted. Roads around the airport were also closed or blocked by traffic accidents for much of the day.

Airport employees handed out blankets to accommodate the many passengers who were stuck overnight.

"For those passengers joining us overnight, we want you to be as comfortable as possible. Please stop by the customer service booths on Concourses A, B or at baggage claim 9 in the terminal and pick up a blanket," the airport tweeted Wednesday evening.

The airport announced on Twitter early Thursday morning, that four of its six terminals have reopened. But, more than 660 flights into or out of Denver have been canceled for Thursday -- about 35% of outbound flights and 38% of inbound flights.

A bomb cyclone occurs when there is a rapid pressure drop, with a decrease of at least 24 millibars -- a measure of atmospheric pressure -- over 24 hours. This storm dropped 33 millibars from Tuesday into Wednesday.

As the storm moves across the US, a mix of severe weather is expected to accompany it.

While the bomb cyclone has brought blizzard conditions to Colorado, it has caused flooding in Iowa, Illinois and Missouri -- mostly along the Mississippi River.

It also has unleashed high winds across several states. Hurricane force winds could be felt from Colorado all the way to Amarillo, Texas.

Wind gusts of 50 to 70 mph are expected through Thursday morning across Colorado, New Mexico, Texas and Oklahoma, CNN meteorologist Monica Garrett said. Some areas could see gusts as strong as 110 mph.

Severe storms, flash flooding, dense fog, and possible tornadoes are also threats as the storm moves across the central part of the country.

High winds have knocked out power to 125,000 people, most of them in Colorado and Texas.

Travelers have run into problems at the airport as well as on the roads.

On Wednesday, 100 vehicles were involved in an accident on Interstate 25 near Wellington, Colorado, according to Wellington Fire Protection.

There were no fatalities, according to the fire department's Facebook page, but there were injuries ranging from minor to serious and emergency responders came from both Colorado and Wyoming.

About 1,100 motorists were also stranded in the storm across Colorado.

The weather has been so severe in the state that law enforcement officers had to abandon their vehicles and get shelter themselves instead of responding to the high volume of motor vehicle accidents, officials said.

"We are at the point where we are rescuing rescuers out there," said Elbert County Manager Sam Albrecht.

In Weld County, north of Denver, State Patrol Cpl. Daniel Groves, 52, was struck by a car Wednesday morning while assisting a motorist whose car slid off Interstate 76, according to the state police. Groves, on the job since 2007, was declared dead at a hospital.

High speed in poor driving conditions was being investigated as a possible factor, the patrol said. No charges had been filed.