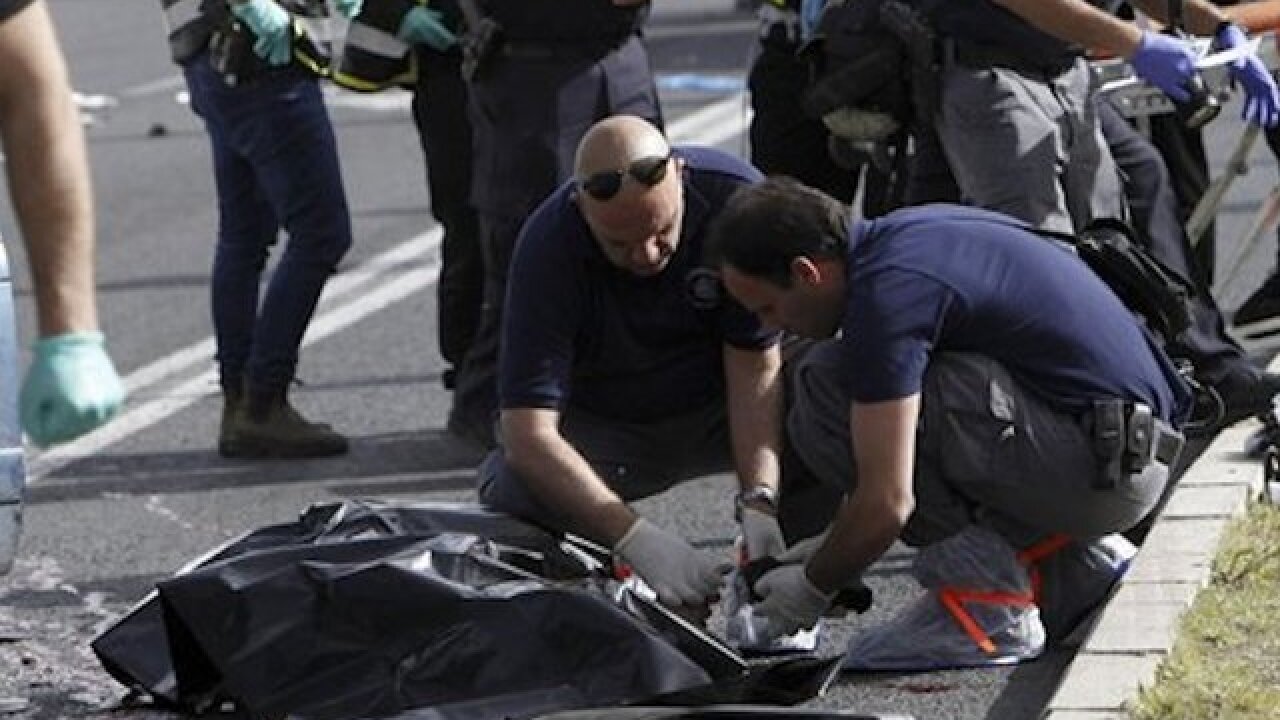 Copyright Associated Press
&lt;p&gt;Police take finger prints from the body of a Palestinian involved in a shooting attack in Jerusalem Wednesday, March 9, 2016. Israeli police say two Palestinian gunmen carried out shootings in Jerusalem and were shot and killed by police. One Palestinian man was shot and seriously wounded by the gunmen, police say. (AP Photo/Mahmoud Illean)&lt;/p&gt;

The stabbing spree took place Tuesday near the sea in the city of Jaffa, where Biden was meeting with Israel's former president nearby. Biden said his wife and grandchildren were having dinner on the beach not far from the scene of the attack, which injured a dozen Israelis, civilians and police officers.

Abbas' Fatah party posted a cartoon on its Twitter account of a hand holding a knife over a map of Israel and the Palestinian territories, and calling the Palestinian stabber from Tuesday's attack a "hero" and "martyr."

"This is the result so long as Israel does not believe in the two-state solution and ending its occupation," the Fatah statement on Twitter read.

Both leaders spoke highly of the American stabbing victim, Taylor Force, a 28-year-old MBA student at Vanderbilt University and a West Point graduate who served tours of duty in Iraq and Afghanistan.

For more than five months, there has been a rash of Palestinian attacks on Israeli civilians and security forces. Palestinians say the violence stems from frustration at nearly five decades of Israeli rule over the West Bank and east Jerusalem, while Israel says the violence is fueled by a campaign of Palestinian incitement compounded on social media sites that glorify and encourage attacks.

"The kind of violence we saw yesterday, the failure to condemn it, the rhetoric that incites that violence, the retribution that it generations, has to stop," Biden said.

The U.S. vice president spoke warmly of his decades-long relationship with Netanyahu, and reemphasized American's commitment to Israel's security.

Biden is in Israel for a two-day visit as part of a regional tour of the Mideast. He is meeting both Israeli and Palestinian leaders. There were speculations he would try to revive the moribund Israeli-Palestinian peace talks, but Biden said, "I didn't come with a plan. I just came to speak with a friend," referring to Netanyahu.

Shortly before the two leaders met in Jerusalem, two Palestinian gunmen carried out shootings in the city before police shot and killed them, Israeli police said. A Palestinian man was seriously injured in the shootout.

The incident began when passengers on an Israeli bus spotted the two gunmen on the street and heard shots fired, said police spokeswoman Luba Samri. No injuries were reported. A motorist responded by shooting toward the suspects, who fled by car.

Police began searching for the gunmen's vehicle. When a policeman approached a car that matched the description, the gunmen raised their weapons at the officer and he fired at them. Other police units on the scene shot at the suspects, killing them, Samri said. The shootout took place on a main road alongside Jerusalem's light rail train tracks and close to the New Gate of Jerusalem's Old City.

A Palestinian civilian at the scene was shot in the head and is in a serious but stable condition, an Israeli hospital said. Police are investigating whether he was shot by the gunmen or by police.

Police identified the two gunmen as Palestinians, both about 20 years old, from the Jerusalem area.

In the West Bank on Wednesday, a Palestinian with a knife attempted to stab Israeli soldiers at a checkpoint, and soldiers shot and killed him, the Israeli military said. Also, an Israeli stabbed and lightly injured a Palestinian in the West Bank, apparently during a business-related argument, police said. The Israeli fled the scene and police are searching for him.

A wave of near-daily Palestinian assaults on Israeli civilians and security forces erupted in mid-September and shows no sign of abating. The bloodshed — mainly stabbings but also shootings and car-ramming attacks — has killed 28 Israelis. During the same time, at least 179 Palestinians were killed by Israeli fire. Most of the Palestinians have been identified by Israel as attackers, while the rest were killed in clashes with security forces.