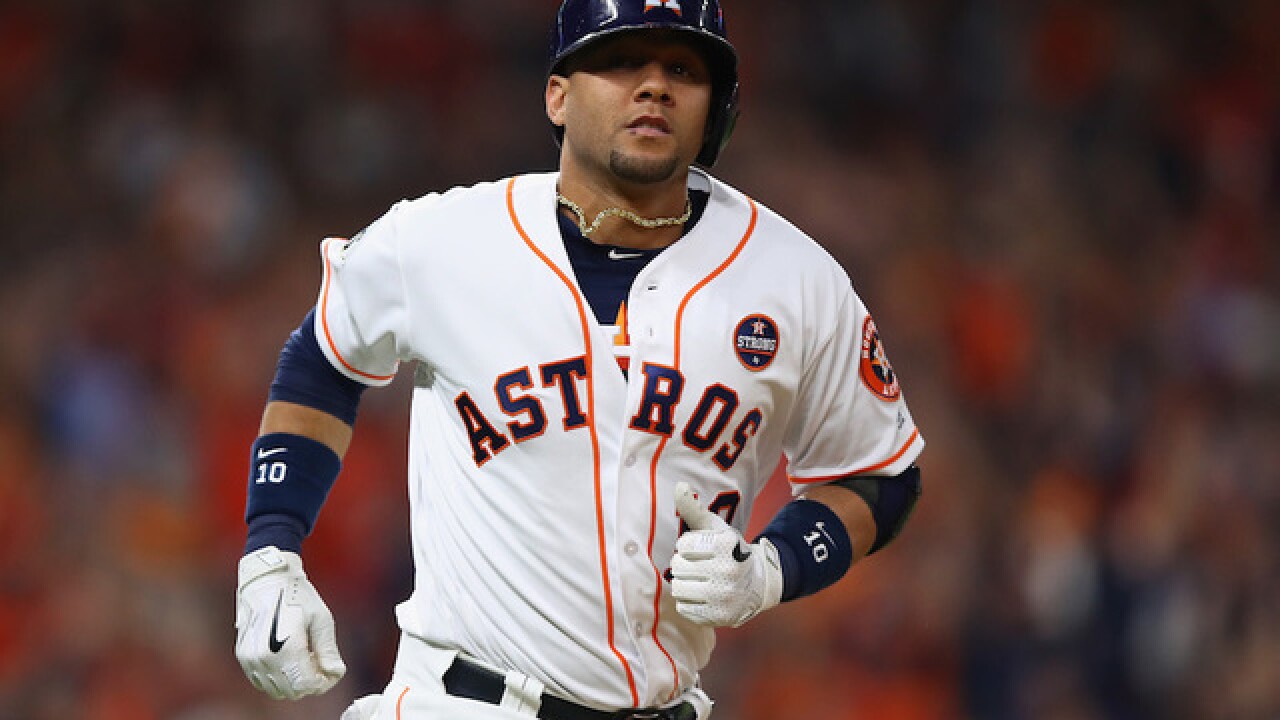 Image copyright 2017 Getty Images. All rights reserved. This material may not be published, broadcast, rewritten, or redistributed.
&lt;p&gt;Yuli Gurriel #10 of the Houston Astros reacts after hitting a solo home run during the second inning against the Los Angeles Dodgers in game three of the 2017 World Series at Minute Maid Park on October 27, 2017 in Houston, Texas.&lt;/p&gt;

Friday night should have been one of unbridled joy for Houston Astros first baseman Yuli Gurriel, but instead it saw him apologizing and facing a suspension.

In the Astros 5-3 win over the visiting Los Angeles Dodgers — which gave Houston a 2-1 lead in the World Series — Gurriel hit a home run that led the crowd at Minute Maid Park to erupt in applause.

But it was what Gurriel was seen doing after the home run that stole the post-game headlines.

Fox TV cameras caught Gurriel in the dugout making a racist gesture toward Dodgers pitcher Yu Darvish, a Japan native. Video shows Gurriel using his fingers to pull his eyelids into slits before saying the phrase "chinito," which roughly translates to "little Chinese boy," according to The Los Angeles Times.

After the game, Gurriel, a Cuba native, was asked about the gesture, for which he quickly apologized.

"The gesture was saying that I wish he would look at me like one of them and maybe he’d throw me an easy pitch so I can do something,’’ Gurriel said, according to USA Today. “At no point did I mean that in an offensive way. On the contrary, I’ve always had a lot of respect for them.’’

As for his "chinito" remark, Gurriel reportedly said, “In Cuba and in other places, we call all Asian people Chinese. But I played in Japan and I know they find that offensive, so I apologize for that. I know they don’t like it.’’

Shortly after the game ended, Darvish tweeted that he forgave Gurriel for the gesture and hoped people could learn from it.

"What he had [sic] done today isn't right, but I believe we should put our effort into learning rather than to accuse him," Darvish wrote. "Let's stay positive and move forward instead of focusing on anger."

On Saturday, USA Today reported that Gurriel would be suspended for five games in the 2018 season for his actions. He won't be forced to miss any games during the 2017 World Series.

Some top sports columnists urged Manfred to suspend Gurriel immediately while others said he should be let off the hook.

Clint Davis is a reporter for the Scripps National Desk. Follow him on Twitter @MrClintDavis. Keep up to date with the latest news by following @ScrippsNational on Twitter.