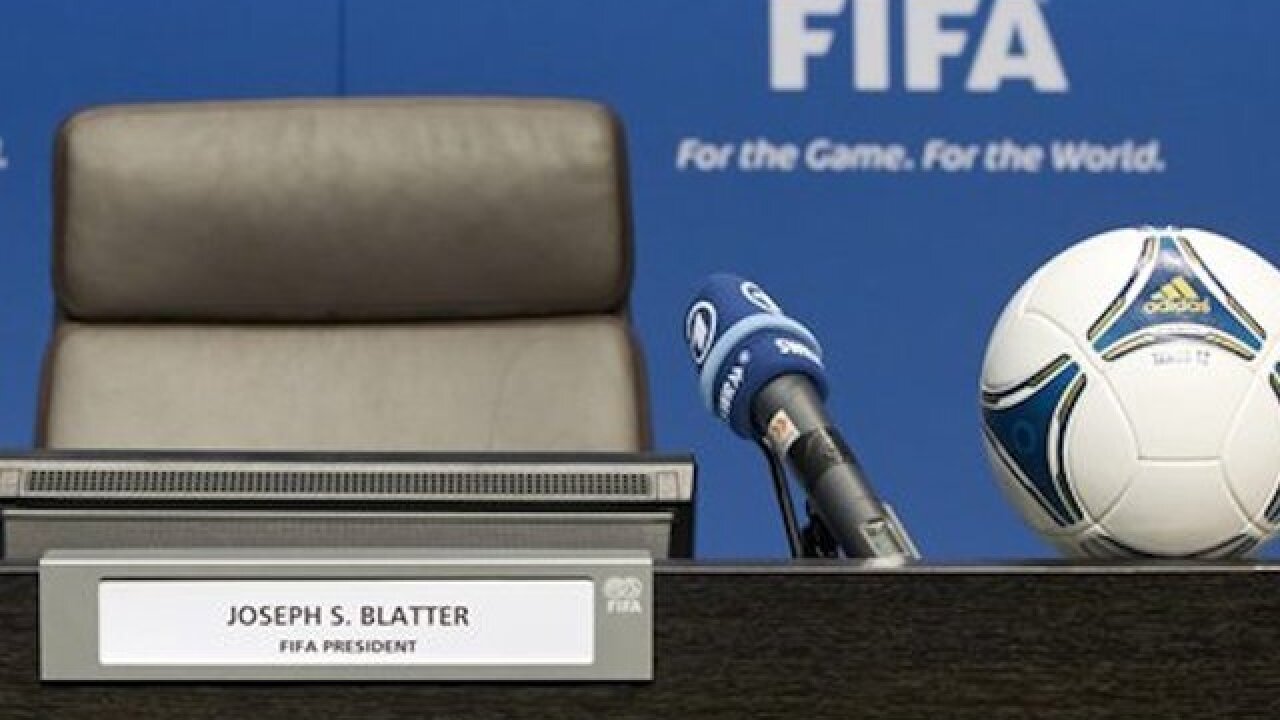 Copyright Associated Press
&lt;p&gt; In this July 17, 2012 file photo the seat of FIFA President Joseph Sepp Blatter is empty ahead of a press conference after the extraordinary meeting of the FIFA Executive Committee, at the FIFA headquarters in Zurich, Switzerland. The Sepp Blatter era at FIFA is set to finally end Friday, Feb. 26, 2016 when soccer's scandal-scarred world body picks a new president after nine months of crisis. (Alessandro Della Bella/Keystone via AP, file)&lt;/p&gt;

ZURICH (AP) — Guests at Zurich's up-scale hotels will have spotted two unusual sights this week: a welcome desk staffed by bright-eyed young reps from football's world governing body FIFA; and small groups of middle-aged men — soccer officials from around the globe — furtively scanning the lobby for any sign that a police raid might be about to go down.

As delegates from 209 nations converged on the Swiss city to elect a new president and tackle much-needed reform, the presence of three former football officials in nearby jails was a reminder of just how serious the sport has become since U.S. prosecutors took an interest in the corruption allegations that have dogged FIFA for years.

Former president of the Venezuelan soccer federation Rafael Esquivel, ex-FIFA staffer Julio Rocha of Nicaragua and Costas Takkas, a British citizen and former aide to the president of CONCACAF — the Confederation of North, Central American and Caribbean Association — are all languishing in Swiss prisons awaiting decisions on their extradition to the United States.

Switzerland's highest court is expected to reach a decision on Esquivel's case soon. Unless it overturns a lower court's ruling he would join five other former soccer officials from Latin America who have already been extradited to the United States. A sixth, Eugenio Figueredo, was sent to his native Uruguay to face trial there.

U.S. authorities accuse Esquivel of receiving bribes worth millions of dollars in connection with the sale of marketing rights to the Copa America tournaments in 2007, 2015, 2016, 2019 and 2023.

Rocha is wanted on U.S. racketeering charges and Takkas is accused of accepting bribes in exchange for awarding marketing contracts. Both have appealed their extradition before the Federal Criminal Court, their last-but-one chance of avoiding U.S. justice.

Aside from seeking the extradition of former footballing officials, U.S. authorities have also asked Swiss authorities to provide mountains of documents that could shed light on criminal wrongdoing at FIFA, according to Folco Galli, a spokesman for the Swiss Federal Office of Justice.

So far, Swiss authorities have sent their U.S. counterparts:

— 50 folders of bank documents detailing money flows across dozens of different accounts, alleged to have been used to route bribes to high-ranking FIFA officials;

— a report by former U.S. Attorney Michael Garcia's investigation of the World Cup bidding contests, won by Russia and Qatar;

Switzerland's Justice Ministry is still reviewing further bank documents and some 100 folders from a 2008 case by prosecutors in the Swiss canton (state) of Zug against a former FIFA marketing partner, which first shed light on some of the questionable money flows within the organization. FIFA wasn't on trial at the time, but judges censured its failure to properly oversee marketing payments worth hundreds of millions of dollars in the years up to 2001.

Swiss prosecutors opened criminal proceedings against Sepp Blatter, the longtime FIFA president, only in September — seven years after the Zug trial. Blatter is suspected of criminal mismanagement and misappropriation of FIFA money linked to a $2 million payment to Michel Platini, the former head of the European federation UEFA, and of selling undervalued TV rights for the 2010 and 2014 World Cup's to then-FIFA vice president Jack Warner.

Blatter has yet to be formally charged. If convicted he could face up to five years in prison. The proceedings against Blatter prompted FIFA's ethics committee to ban Blatter and Platini for eight, later reduced to six, years. Both men deny wrongdoing and have appealed against their sanctions.

Speaking before Friday's extraordinary FIFA congress, Jurgen Mainka, the deputy general secretary of CONCACAF, was confident that past misdeeds wouldn't weigh on the organization forever, insisting that "tomorrow will mark a great turnaround in FIFA's history."

"We need to look at it from a professional point of view and march forward in football's best interest," he said. "No matter what happened in the past, we must look on to the future."

That may be easier said than done. Those tasked with sifting through the FIFA vaults expect to be focusing on the past for some time.

"Although the last three pending extradition procedures are drawing to a close, the extent of the legal assistance request (from the U.S.) is so large that there's no end in sight," said Galli.

Andre Marty, a spokesman for Swiss Federal Prosecutors, said their investigation has been notified of a 20 further suspicious financial transactions in the past two months, taking the total to 152.