Amtrak to run as scheduled Monday after railroad worker deaths 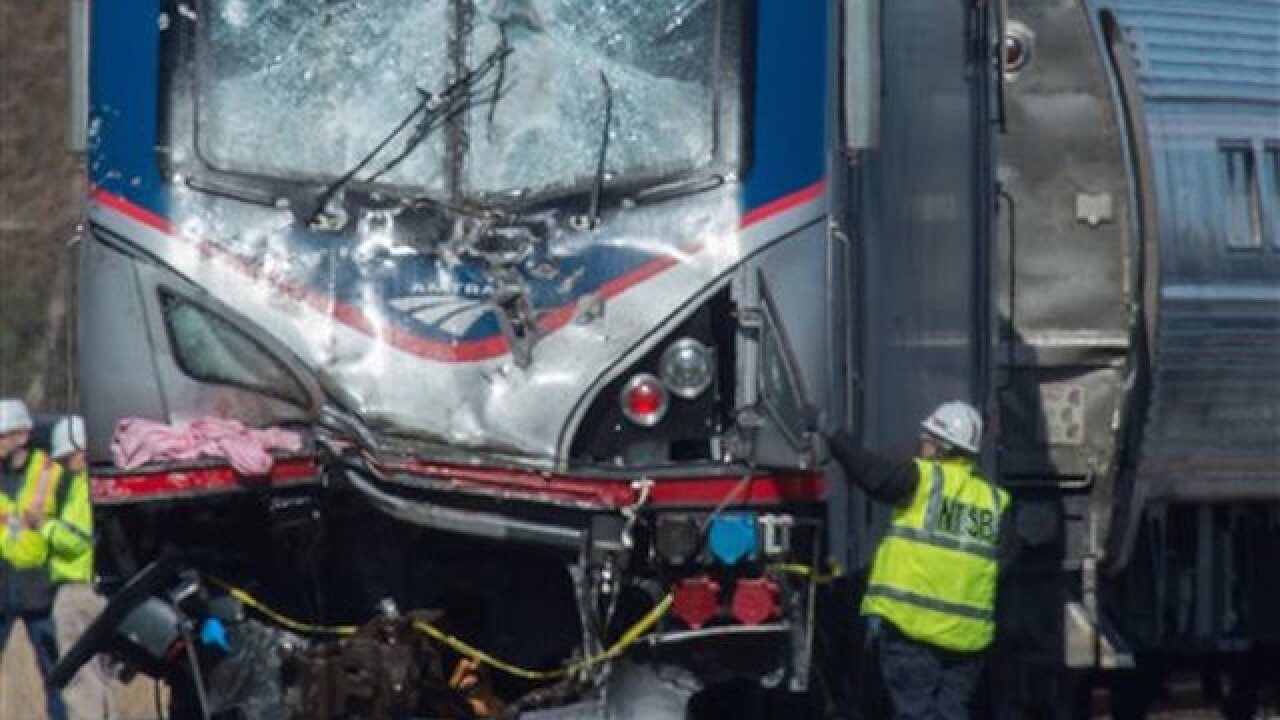 Copyright Associated Press
&lt;p&gt;An National Transportation Safety Board staffer inspects the engine of Amtrak Train 89 which hit a construction vehicle on the tracks and derailed in Chester, Pa., Sunday, April 3, 2016. The train was heading from New York to Savannah, Ga. (Clem Murray/The Philadelphia Inquirer via AP)&lt;/p&gt;

CHESTER, Pa. (AP) — Amtrak trains were running on schedule Monday on the Northeast Corridor, a day after a train struck heavy equipment on the tracks outside Philadelphia, killing two railroad workers.

Train 89 was heading from New York to Savannah, Georgia, at about 8 a.m. Sunday when it hit a piece of equipment that was on the track in Chester, about 15 miles outside of Philadelphia, officials said. The impact derailed the lead engine of the train, which was carrying more than 300 passengers and seven crew members.

Chester Fire Commissioner Travis Thomas said two people were killed. An NTSB official confirmed that one was the equipment operator. U.S. Sen. Chuck Schumer, of New York, said Amtrak board Chairman Anthony Coscia told him the other person killed was a supervisor and both were Amtrak employees.

More than 30 passengers were sent to hospitals; their injuries were not considered life-threatening, officials said.

NTSB investigator Ryan Frigo said at a Sunday news conference the locomotive engineer was among those taken to hospitals. He said he did not know why the equipment was on a track the train was using. Scheduling, the track structure and the work being performed at the time of the accident would be part of the investigation, he said.

The event data recorder and forward-facing and inward-facing video from the locomotive were recovered, he said, and the recorder was sent to the NTSB laboratory in Washington. Frigo said it will help determine how fast the train was going at the time of the crash.

Schumer said it's unclear whether the equipment was being used for regular maintenance, which usually is scheduled on Sunday mornings because fewer trains are on the tracks then, or whether it was clearing debris from high winds in the area overnight.

But he said Amtrak has "a 20-step protocol" for having equipment on the tracks, described by Amtrak as a backhoe, and no trains are supposed to go on a track when equipment is present.

"Clearly this seems very likely to be human error," Schumer said. "There is virtually no excuse for a backhoe to be on an active track."

An Amtrak spokeswoman said in an email Sunday to The Associated Press that any information about the type of equipment on the track and why the train was using that track would have to come from the NTSB. She said any information about the two people killed, including what company they worked for, would haveto come from the Delaware County medical examiner.

Ari Ne'eman, a disability rights activist heading to Washington after speaking at an event in New York, said he was in the second car at the time of the crash.

"The car started shaking wildly, there was a smell of smoke, it looked like there was a small fire and then the window across from us blew out," said Ne'eman, 28, of Silver Spring, Maryland.

Some passengers started to get off after the train stopped, but the conductor quickly stopped them, he said. Officials started evacuating people to the rear of the train and then off and to a local church.

"It was a very frightening experience. I'm frankly very glad that I was not on the first car," where there were injuries, Ne'eman said. "The moment that the car stopped, I said Shema, a Jewish prayer. ... I was just so thankful that the train had come to a stop and we were OK."

Businessman Steve Forbes told C-SPAN's "Book TV" by phone that he was in the next-to-last car when the train "made sudden jerks" as if it was about to make an abrupt stop.

Forbes, chairman and editor-in-chief of Forbes Media, said the train then made another abrupt stop and "everyone's coffee was flying through the air."

"The most disconcerting thing ... (was) not knowing what had happened," he said.

Since the public address system was knocked out, he and other passengers were left to speculate for 20 or 25 minutes before a crew member came back to tell them what had happened, he said.

The derailment comes almost a year after an Amtrak train originating from Washington, D.C. bound for New York City went off the tracks in Philadelphia. Eight people were killed and more than 200 were injured in the May 12 crash. The exact cause of that derailment is still under investigation, but authorities have said the train had been traveling twice the speed limit.

Nearly three decades ago, an Amtrak train struck maintenance equipment on tracks in Chester, near the site of Sunday's derailment. More than 20 people were injured in that January 1988 crash of Train 66, the Night Owl. The NTSB determined afterward that an Amtrak tower operator had failed to switch the train to an unoccupied track.