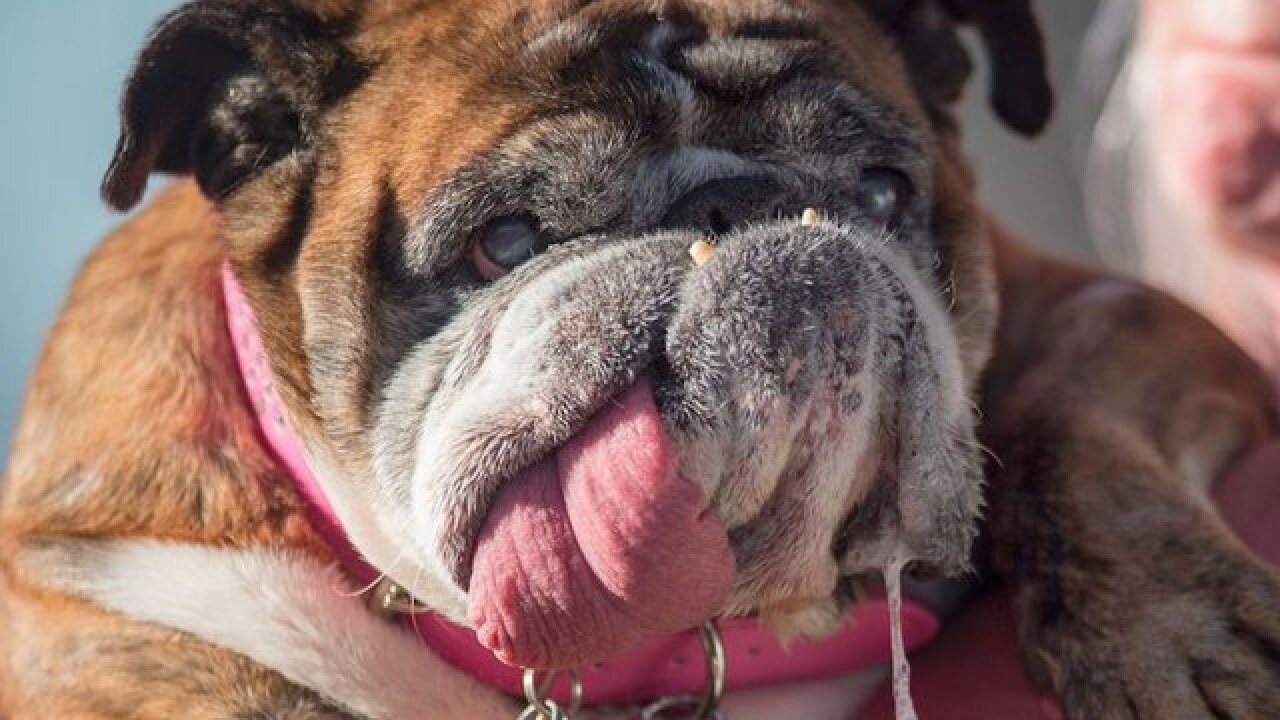 Woof, these are some total dogs. And that's the point.

The 30th annual World's Ugliest Dog Contest came to a close in Petaluma, California, on Saturday with Zsa Zsa, an English bulldog with a bodacious tongue that dangles down to her chest, taking best -- er, worst? -- in show.

"Nine years young with a swaggering tongue, Zsa Zsa delivered a shower of slobber as she claimed this year's title," said a news release announcing her victory.

Zsa Zsa and owner Megan Brainard of Anoka, Minnesota, will receive $1,500, "a very large trophy" and a flight to New York, where they will appear on the "Today Show."

The competition was ruff. Underbites and awkward tongues were a theme among the 15 homely contenders, as were crazy eyes.

There was a beefy, "exercise intolerant" bulldog named Meatloaf (aka Snorlax) that organizers suspect might be part pig. There was a Pekingese named Wild Thang that looks like it just got off a bender with Charlie Sheen. Also competing were some surly-looking Chihuahuas and several Chinese cresteds -- which are to ugly dog shows what Brazilians are to World Cups.

"It was a very difficult decision. We loved all of the dogs," NBC News correspondent and judge Jo Ling Kent said. "It was a huge responsibility, and we are just so happy for Zsa Zsa."

Runners-up were Scamp, a dreadlocked terrier-looking thing that enjoys literary landmarks such as "Go, Dog. Go!" and Josie, a scraggly Chinese crested and native of Tucson, Arizona, whose tongue lolls from the side of her mouth.

While mocking these bedraggled beasts is good fun, the World's Ugliest Dog Contest is actually a noble endeavor.

PHOTOS: The World's Ugliest Dog contestants and winners over the years

A function of the annual Sonoma-Marin Fair, it seeks to demonstrate "the pedigree does not define the pet." By raising awareness about the benefits of adoption, "the contest speaks to the importance of advocating for the adoration of all animals," even those not blessed with Lassie's movie-star looks.

Many of the pups taking part in the contest were rescued from kill shelters or puppy mills, organizers say.

That includes Zsa Zsa, your 2018 queen, who spent five years at a puppy mill in Missouri before being purchased by the nonprofit Underdog Rescue.

"From the moment we saw her beautiful face, we knew we would be her forever home," Brainard said. "We are so excited for her. She deserves this."