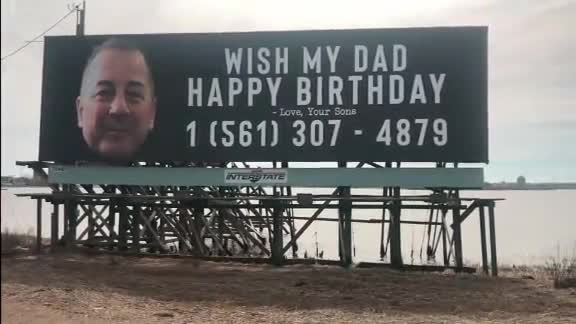 A New Jersey man's phone has been inundated with texts and calls from well-wishers ever since his sons bought him a billboard near Atlantic City.

(CNN) -- When CNN attempted to reach Chris Ferry, his voice mail was full.

The New Jersey man's phone has been inundated with texts and calls from well-wishers ever since his sons bought him a billboard near Atlantic City.

The sign reads, "Wish my dad a happy birthday" and includes Ferry's photo and phone number.

The billboard went up on March 6, and Ferry has already received more than 15,000 messages from all over the world wishing him a happy 62nd birthday -- even though the actual day isn't until March 16.

Soon after the billboard went live, Ferry received a happy birthday text from a stranger named Nick. When Ferry thanked him and asked how they knew each other, Nick said he had seen a billboard while driving.

"(My dad) drove immediately to the sign and took a picture with it," said Ferry's son -- also named Chris.

Continuing a tradition of humor

Ferry's two sons, Michael and Chris, were stumped on what to get their dad for his birthday this year.

When they were young, they used to tell waiters at restaurants that it was their dad's birthday to pull his leg and maybe get free dessert, the younger Chris Ferry said.

So they decided to continue to honor his dad in a funny way. The younger Chris Ferry had recently purchased a billboard outside Atlantic City for his addiction recovery center, and he became inspired to get one for his dad as well.

"I called my brother (Michael) and said, 'What if we put dad's picture right on the billboard and say wish him a happy birthday?' The prankster in me came out," Chris Ferry said. "My brother said he loved it -- he was dying laughing."

The two sons never expected so many people to reach out to their dad.

"We thought people in the local area and his buddies would call in, and this would be a fun memory," the younger Chris Ferry said. "We did not know that it was going to be like this."