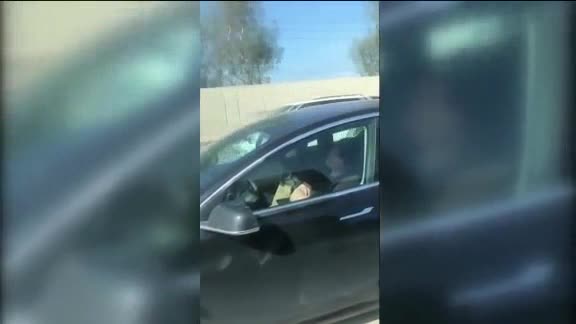 LOS ANGELES — A couple driving on the Interstate 5 Freeway in Los Angeles captured video of a passing driver appearing to be asleep behind the wheel of a Tesla.

Alisha Olivier recorded the video while her husband, Clint, was driving southbound on the freeway near the Magic Mountain exit.

"A person sleeping behind the wheel of a car going 75 mph on the 5 freeway," said Clint Olivier.

The driver's asleep, car's on autopilot and Clint Olivier said the car didn't even weave. It stayed in its lane heading right down the freeway. The driver was totally oblivious.

Tesla writes on its website: "Autopilot is intended for use with a fully attentive driver, who has their hands on the wheel and is prepared to take over at any time."

The driver does take over eventually, waking suddenly and grabbing the wheel.

This would be the second known driver asleep at the wheel of a Tesla this year in Los Angeles. In March, another cellphone video caught the same happening with the car on autopilot.