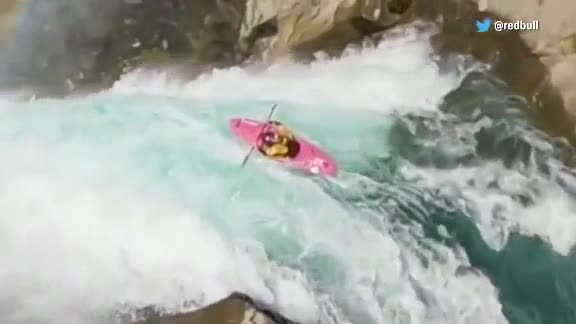 A 26-year-old kayaker made the second tallest waterfall descent in known history earlier this month.

(CNN) - A 26-year-old kayaker made the second tallest waterfall descent in known history earlier this month.

Dane Jackson dropped 134 feet into the relative unknown before coming out the other end unscathed.

Jackson has tried every format of kayaking -- from freestyle to racing -- and has won world titles as both a junior and professional.

He discussed how his ride off the lip of this volcanic waterfall.

"Waterfalls are definitely, it's a risky side of aspect of kayaking. There's definitely a lot of things that can go wrong, but, um, luckily over the years I've run enough waterfall that I have a lot of trust in them, faith in my skill to be able to do something like that. Um, but then the waterfall itself, actually there are a lot of things that were really great about in terms of safety and being able to run it well, like the top of the waterfall had a really nice shape. It was really, I felt really good about having a good line, but also there's actually access below the waterfall right by the river. It's meant that I can have all the safety I needed. So, all in all, except for a few places that it kind of landed on rock. Um, all in all, it's actually a really good waterfall," said Jackson.

The Tennessee kayaking champ says five years of planning and preparation went into this attempt.

This is the first known kayaking descent of Salto del Maule.

With this one under his belt, Jackson has now plunged off six waterfalls that are at least 100 feet high.

A: Dane Jackson going down the 2nd largest waterfall ever ridden by a kayaker 🙌 pic.twitter.com/abPDKG4p9h