Road tripping in a $3 million Bugatti 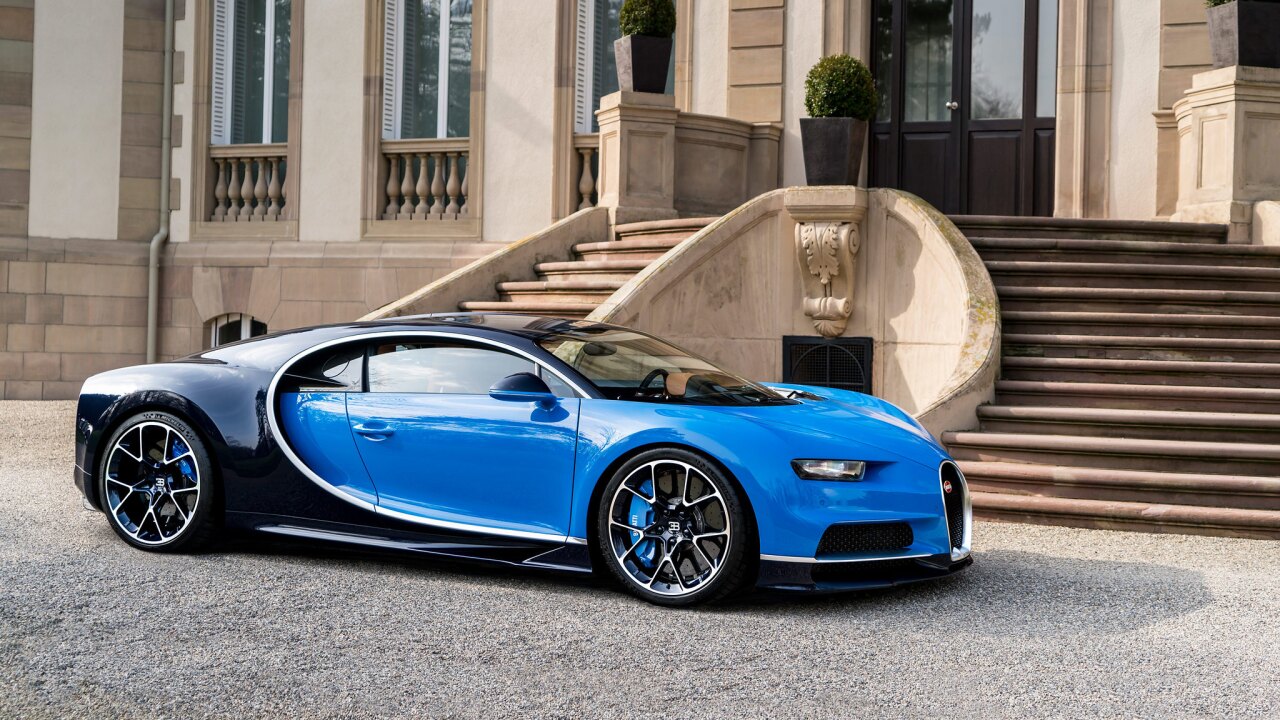 (CNN) -- When I was asked to drive a $3 million Bugatti Chiron 325 miles from Monterey, California, to Los Angeles, I was naturally interested. A beautiful car. Beautiful scenery. I just had one question: Where would I put my suitcase?

We needed another car for that. If you buy a Bugatti you can purchase custom-fitted luggage shaped just to squeeze in a night's worth of gear into the Chiron's tight spaces. I only had my carry-on and a laptop bag, but Bugatti had thoughtfully provided a solution. A Nissan pickup drove along with us, carrying my luggage and a couple of large containers filled with racing fuel.

This sort of absurdity is part of the charm of the beautifully impractical Chiron. It's also the reason Bugatti CEO Stephan Winkelmann told me the company is considering new models for people who want something just slightly more practical.

The Bugatti Chiron was designed to be the ultimate grand touring car, combining outrageous power with comfort, ease and refinement. It has a 1,500 horsepower 16-cylinder engine with four turbochargers but it is, amazingly, not at all terrifying to drive. It is in fact, rather laid back.

But it does have its quirks. Like the lack of luggage space and the racing fuel the Nissan pickup hauled for us. The 100 octane gas wasn't really needed for refueling. Depending on how you drive it, the Chiron's fuel consumption is somewhere between that of a Chevrolet Suburban and an uncontrolled refinery fire. Gas stations would be easy enough to find along our route, but the problem was the Chiron requires at least 93 octane fuel for peak performance, while most California gas stations carry 91 octane at most. Racing fuel was added to the tank to boost the octane rating.

Heaven forbid I didn't experience peak performance. I might have only moved my pancreas backwards an inch when I stepped on the accelerator instead of the full inch and a quarter I could get with 93 octane.

We started our drive around 8:30 am from the Munras Inn in Monterey where I'd been staying. Butch Leitzinger, a retired professional race car driver now employed by Bugatti took the wheel first to remind me how the car's controls worked.

I had driven a Chiron before, but it had been a while. The start button is in the steering wheel. There's also a knob in the steering wheel to set driving modes. I could choose a track mode, a high speed Autobahn mode or the normal EB mode, which is good for most ordinary driving situations. (EB is for Bugatti founder Ettore Bugatti.) The Chiron's seven-speed automatic transmission is operated using a stubby but elegant gear selector stalk between the seats.

That's unusual only because it's so normal. Other exotic high-horsepower two-seaters from brands like Lamborghini and Ferrari eschew common gear selector stalks in favor of buttons and steering wheel paddles. Those cars are marketed as "race cars for the street" and have controls to match. A Bugatti is definitely not that. It is designed so that anyone who's ever driven a Mercedes-Benz or BMW can get in and immediately feeI at ease.

We started off on the famous Pacific Coast Highway, which runs along the ocean shore. As we entered an open stretch of straight road, Leitzinger decided to show off the car's acceleration. He warned me to brace myself, then pulled the left steering paddle --— the Chiron does have steering wheel paddles for gear shifting, but you don't have to use them — then he pressed hard on the gas pedal. There was a whooshing sound as turbochargers pulled air into the roaring engine just behind our heads. My spine and skull were pinned back into the leather seat.

From about 30 miles an hour we reached 120 in a few seconds. Then he let off the gas pedal. There was a bigger, more explosive whooshing sound, like a monstrous sigh, as the air that had been going into the turbochargers was suddenly redirected out into the open air. The turbochargers stopped working and the engine slowed.

Leitzinger pulled over near Castle Rock just before the famous curving Bixby Creek Bridge — you may not know its name but you've seen the bridge in car commercials — and I took the wheel. The Chiron is a laid back, stylishbrute of a car. The cockpit is a combination of tasteful leather and shining metal accents. The Chiron is big and strong, but I've been more intimidated by cars with half the Chiron's horsepower. Some people don't like that about it. A car with a four-digit horsepower output but with little terror is sort of an oxymoron.

I'm just fine with it. Unlike other hypercars, the Chiron doesn't punish the driver at ordinary speeds, but it's still exhilarating when pushed fast. The car's sheer power makes sure of that. It's giddy fun experiencing that sort of explosive acceleration, and hearing those sounds, while feeling totally secure in its warm leather cockpit. It's like having your own private luxury roller coaster and you can let it drop whenever there's open road ahead.

Perhaps the most surprising thing about the Chiron is what it doesn't have. Lots of cars costing a small fraction of the Chiron's price have things like blind spot alert systems, lane-keeping assistance and even adaptive cruise control to help prevent collisions on the road. The Chiron we drove had none of that. It also had no large computer screen like most new cars do these days.

That seems as if you're paying more — lots more — for less, but someone buying a Bugatti isn't doing that sort of cost-benefit analysis, Bugatti executives have explained to me. The Bugatti shopper isn't thinking about what looks cool today. He's thinking about his son or daughter driving this car onto the lawn at a high-end classic car show in 30 years. Everywhere we stopped people told us how beautiful the Chiron was. It should get exactly that same reaction in 2049.

Nothing looks outdated and ugly faster than the "latest technology." Old computer screens just look old. And the tiny discs, little fins and plastic bubbles needed for the radar and optical sensors on so many new cars just aren't acceptable on a Bugatti Chiron. There's also the issue of weight on what is already considered a fairly chunky car. If anything makes the car even slightly uglier or heavier and it's not absolutely required by law, it's not included. The awkward looking rubber extensions to the back bumper are required by US regulations, for instance. Many owners remove them the minute they take possession of their Chiron.

The Chiron does have several computer screens but they're hard to notice. There is one on each side of the speedometer. The one on the right can display navigation, among other things. The one on the left is more for meter readings like engine temperature and turbo boost. Running up the center of the dashboard are four metal knobs each topped by a tiny round computer screen. These would show various things like heated seat controls, radio volume, etc.

Whenever we stopped and got out of the car, we had to allow 10 to 15 minutes to answer questions from onlookers and for people to take selfies with it. Driving a Bugatti is like being in a celebrity's posse. Most people asked permission to take a picture as if bodyguards might push their camera phones away. Ferraris and Lamborghinis don't get nearly this much attention. Most of us will get to meet at least a couple of those in our lifetimes. A Bugatti? You might get this close only once.

There's one bad thing about gorgeous, winding two-lane roads. Some people drive on them very slowly and, no matter how fast your 1,500 horsepower ultraluxury hypercar can go, you won't get around them. A lot of our time was spent casually enjoying the ocean views at what felt like school zone speeds. The occasional passing zone provided a rare opportunity to nudge the turbochargers from their nap and blast past other traffic before the extra lane disappeared. Then I could drive along at a quicker pace for a while, not really pushing the car's limits, but enjoying how comfortable and easy it felt charging through curves along cliffs high above the sea.

A little after noon, we stopped at an In-N-Out Burger in Santa Maria where I ordered a double double and fries. While I waited for our burgers, Leitzinger went to the gas station across the street and filled up the Chiron. From there we mostly left the pretty seaside route and took to the interstates. It simply would have taken too long if we'd clung to the coast. At this point, we really were just getting the car to Los Angeles. As the traffic thickened, I happily let Leitzinger take the car through Los Angeles to the airport hotel where I'd spend the night. That stretch was not going to be fun in any car.

The Chiron isn't transportation. It is, quite literally, a rolling work of art designed to be purchased and appreciated as one would a sculpture. Bugatti's CEO Winkelmann wants the brand he leads to move beyond this. After a Bugatti Chiron recently set a speed record for road legal production cars, Winkelmann said that would be it for chasing numbers.

Bugatti will continue making hypercars like the Chiron but is looking at adding something a little more amenable to real life.

"I think we are ready, as a brand, for a car that is daily usable," Winkelmann said to me during a conversation the day before my drive. "Something that can be driven from A to B on a different price level and also a different [production] volume level."

We're talking about Bugatti here, though. Saying a new model will be at a different price and production level does not mean it will be as relatively mundane as, say, a $200,000 Lamborghini Urus. Bugatti might make fewer than 1,000 a year of this new model as opposed to fewer than 100 annually of the Chiron, Winkelman said.

It also might — just might— be electric, he said. That is not something being considered for the brand's Chiron-style hypercars, he said. Premium gasoline is still the power source of choice for those cars, he said.

"These cars are the last ones to hold up the flag of power, the maximum you can imagine from an internal combustion engine, therefore these cars will rise in price, big time," Winkelman said.

There is something to be said for putting speed and looks ahead of functionality. People rarely fall in love with cars that make sense.