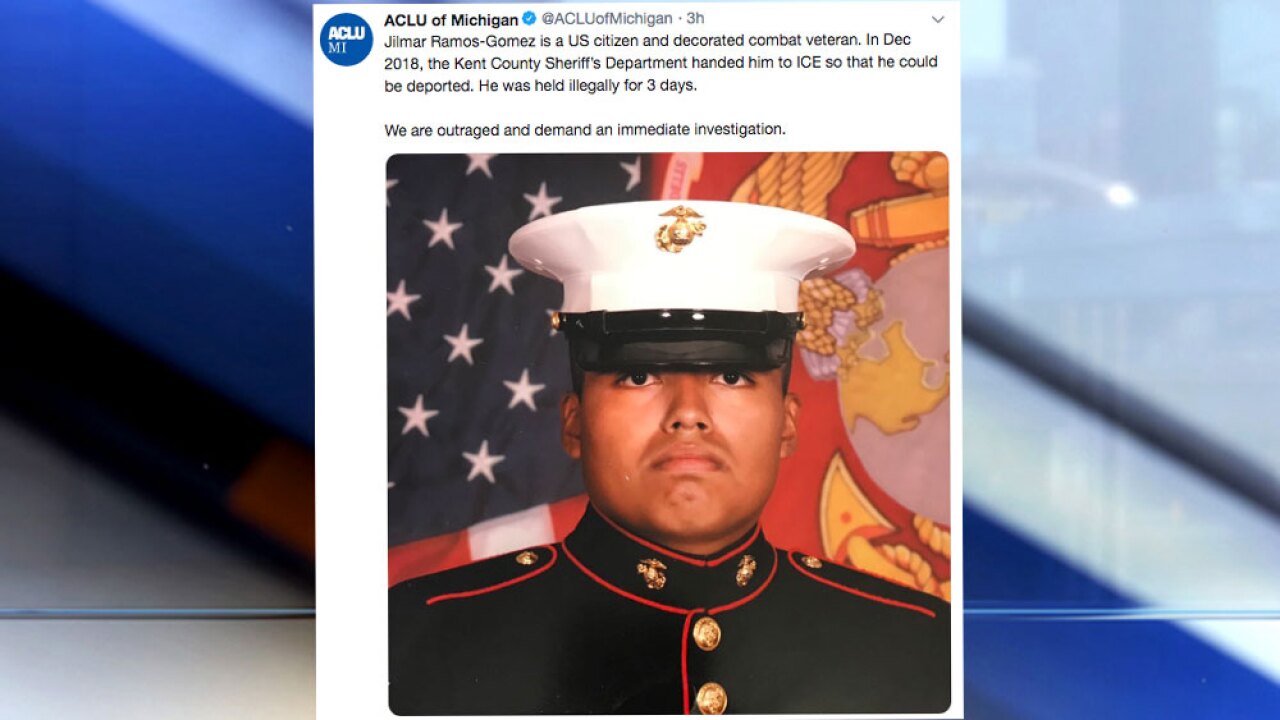 DETROIT (AP) — A Marine veteran with post-traumatic stress disorder was held for three days for possible deportation before federal authorities learned that he was a U.S. citizen born in Michigan, lawyers said Wednesday.

Jilmar Ramos-Gomez, 27, lives in the Grand Rapids area. He was released on Dec. 17 from a detention center in Calhoun County after personal records were provided to Immigration and Customs Enforcement, according to the American Civil Liberties Union of Michigan.

"Why did they think he was a noncitizen? Did they get him confused with someone else? Who knows," ACLU attorney Miriam Aukerman said. "This is an individual who's incredibly vulnerable with a mental illness."

ICE spokesman Khaalid Walls in Detroit said he couldn't respond to media inquiries because of the partial government shutdown.

Ramos-Gomez was in the Kent County jail after being accused of trespassing and damaging a fire alarm at a Grand Rapids hospital on Nov. 21. The ACLU said he pleaded guilty and was supposed to be released on Dec. 14 while awaiting a sentence.

But ICE contacted the jail and requested that Ramos-Gomez be held for pickup. Kent County Undersheriff Chuck DeWitt said ICE, like other law enforcement agencies, has access to fingerprint records.

"Once he was released from our custody, he was under the domain of ICE. Where they take him is their process," DeWitt said. "Our procedures were followed."

DeWitt said he didn't know whether Ramos-Gomez protested when immigration officers picked him up.

Ramos-Gomez was driven 70 miles (113 kilometers) to a detention center in Battle Creek. He was released after three days, after lawyer Richard Kessler contacted ICE on behalf of the man's family.

Ramos-Gomez is receiving mental-health care and wasn't available for an interview Wednesday.

He was a lance corporal in the Marines and received awards for service in Afghanistan. The ACLU said his PTSD had a role in the disturbance at the hospital.

The ACLU is asking the Kent County sheriff and county commissioners to investigate the jail's role in releasing Ramos-Gomez to ICE. Aukerman said Ramos-Gomez' treatment was "appalling."


Today the ACLU of Michigan and @Michimmigrant sent a letter to the Kent County Sheriff’s Dept & Board of Commissioners, demanding an investigation into how an American citizen and navy combat vet was taken into ICE custody.