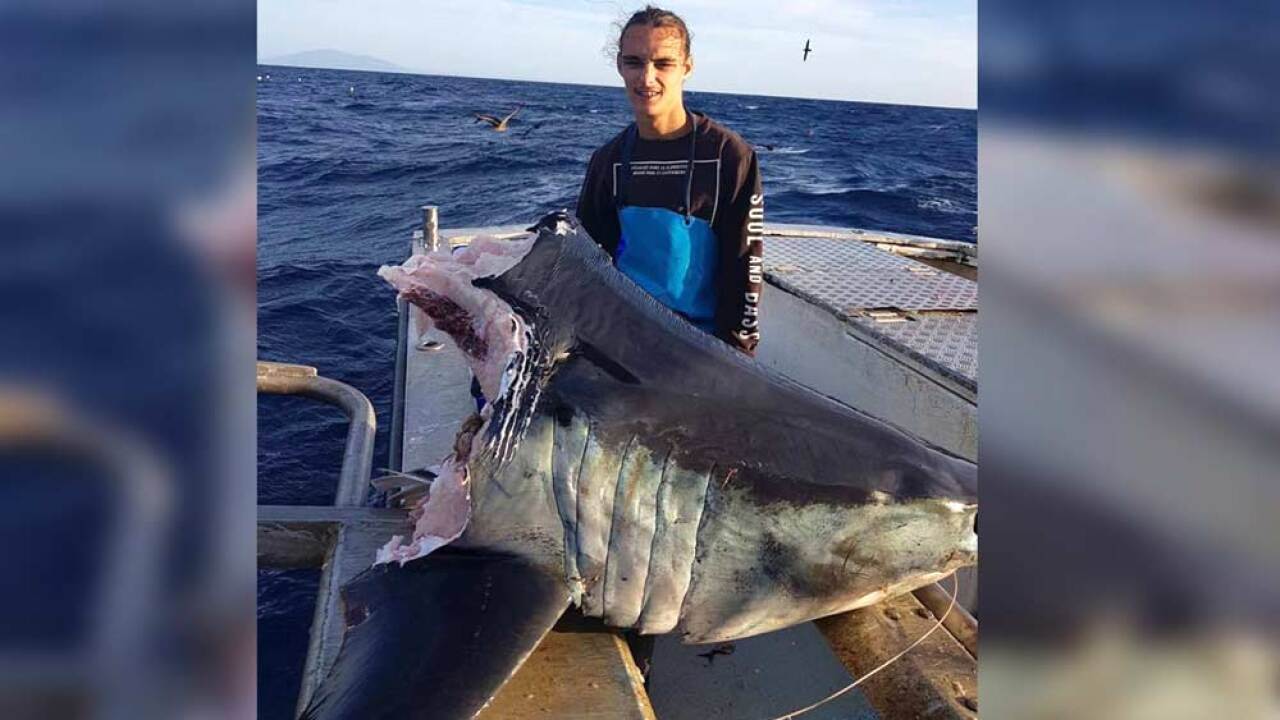 Facebook via CNN Newsource
A huge shark caught by an Australian fisherman was half-devoured by an even bigger predator.

(CNN) -- It's a shark-eat-shark world, as an Australian fisherman discovered this week.

While fishing for small shark off the coast of New South Wales, Trapman Bermagui, also known as Jason, hooked a bronze whaler shark, which was promptly eaten by a colossal mako.

RECOMMENDED: What to look out for during shark migration | Surfing forecast

Before the huge shark could be hauled in, however, it fell prey to an even bigger creature, which devoured all but the mako shark's head.

"We didn't see what ate the mako," Jason told CNN, estimating that the intact shark would have weighed "at least" 250 kilograms (550 pounds). The head alone weighed about 100 kilograms (220 pounds), he said.

When the crew cut the meat from the mako's head, they found another surprise: the detached bill of a marlin, embedded into the flesh, which Jason speculated was the result of "a battle years ago." The find highlighted the "amazing healing powers of the shark," he wrote on Facebook.

Looking at the size of the shark -- and the bite taken out of it -- it's tempting to speculate that the mighty mako fell victim to some gargantuan ocean predator, one better suited to a Hollywood disaster movie.

That might not have been the case, however. Jason speculated that the culprit was a tiger shark, telling CNN: "There's so many around at the moment."

Tiger sharks are among the largest sharks in the ocean, according to Australia's Great Barrier Reef Foundation, growing to 10-16 feet long and weighing 800-1,500 pounds.

Clive Trueman, associate professor in marine ecology at the University of Southampton in the United Kingdom, said the mako was probably unusually vulnerable because it was caught on the hook.

"Once hooked, the struggles of a shark (or other fish) are likely to attract sharks and other predators," he told CNN. "A hooked animal can be bitten by fish that might otherwise not be big enough to tackle it if it was free swimming."

Tyler Bowling, program manager at the Florida Program for Shark Research at the Florida Museum of Natural History, told CNN that the mako was probably attacked by a great white shark or similar.

"Orcas will also attack large sharks to eat their livers, but the bite marks looked like that of a shark so probably a white shark," he said.

As alarming as the photo may look, there's no cause for panic, according to Bowling. "This type of thing happens a couple times a year," he said.