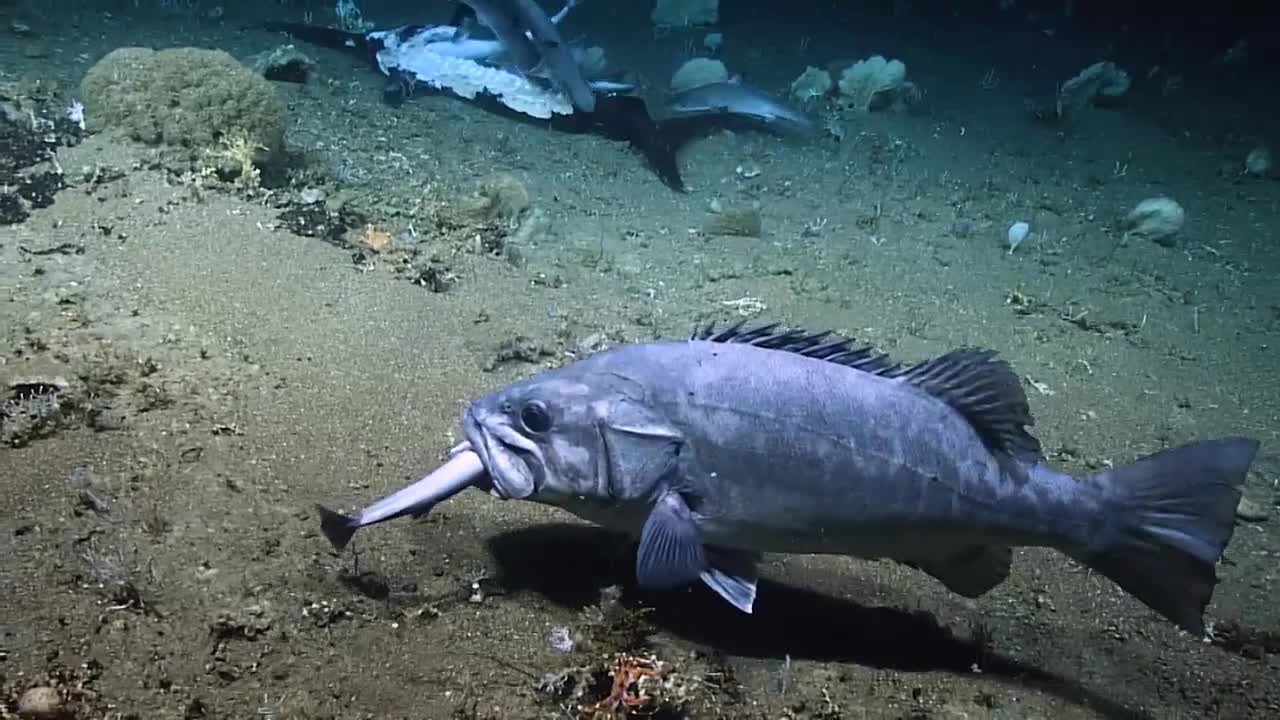 A bony fish known as a wreckfish comes from behind the researchers' remotely operated vehicle and snatches a shark into its mouth, leaving only the tail flailing between its lips. 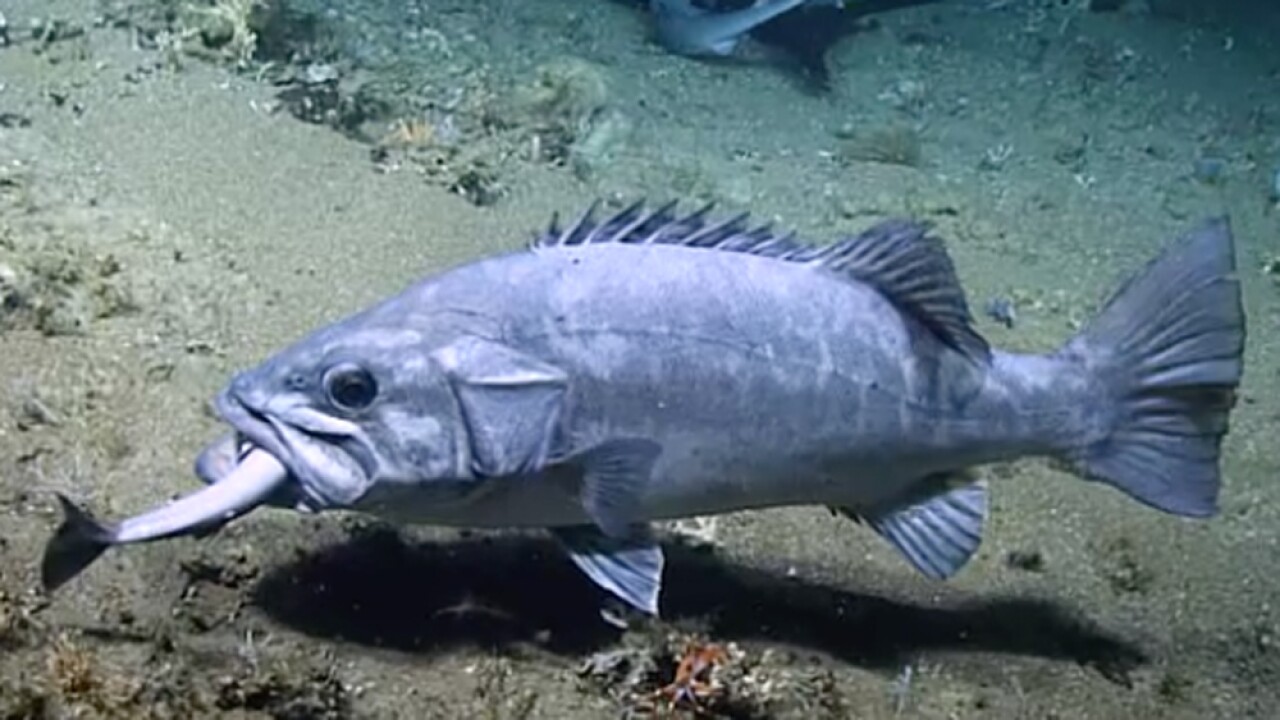 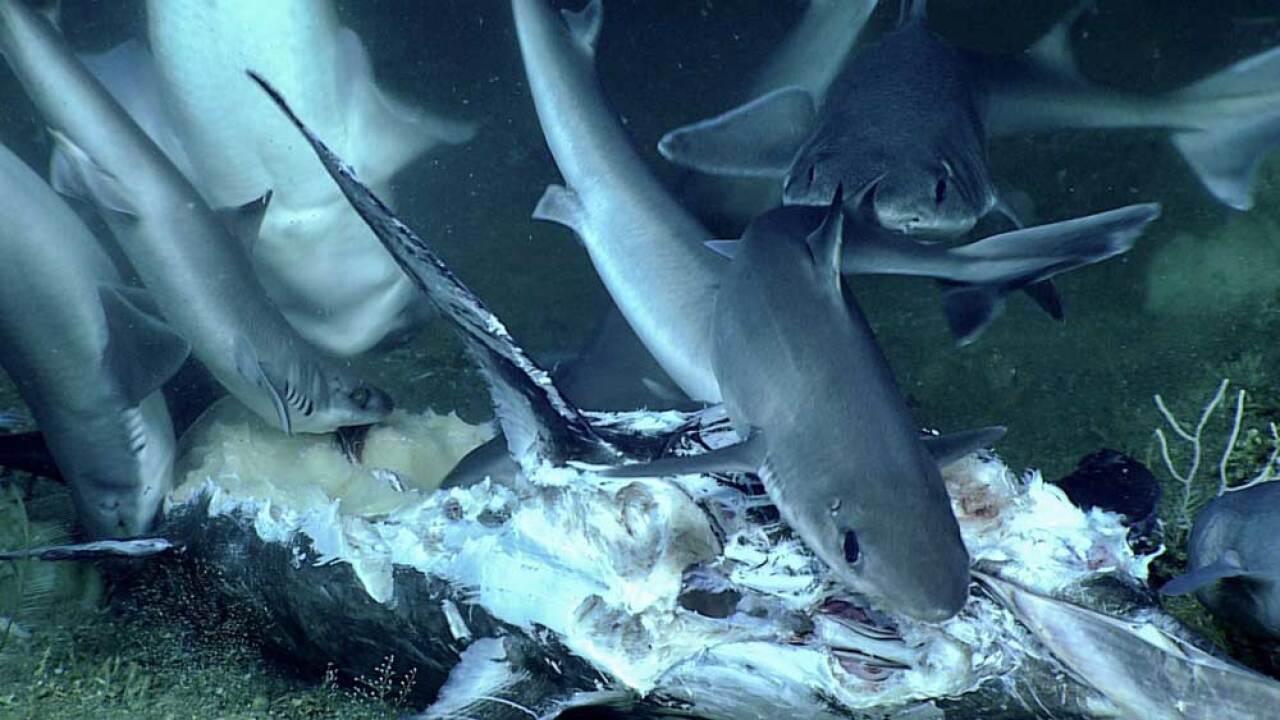 (CNN) -- Perhaps the old saying is true: You are what you eat.

And in this case, a shark primed itself to be a decadent meal for a wreckfish that was casually passing through.

Researchers who were exploring the ocean depths to look for a World War II shipwreck shared a video of a rare shark sighting last month.

The NOAA Ocean Exploration and Research team recorded a school of deep-sea dogfish feasting on a dead swordfish about 1,476 feet below the surface off the coast of South Carolina. The video shows at least 11 of the sharks devouring a recently dead 8-foot swordfish.

Then comes an even bigger surprise.

A bony fish known as a wreckfish comes from behind the researchers' remotely operated vehicle and snatches a shark into its mouth, leaving only the tail flailing between its lips.

Yes, that's a lot of unpack. Let's break down what these researchers are calling a "once in a lifetime event."

It's rare to see sharks like this in a group

The NOAA team says it's uncommon for deep-sea sharks to be in a group unless there is some nearby patch of food.

Peter Auster, a senior research scientist at the Mystic Aquarium and research emeritus professor at the University of Connecticut, said these sharks probably traveled a long way to feed on this swordfish. Scientists call this a "food fall."

"When a large food fall occurs, like a 250-plus pound swordfish, the ability to detect and locate the food, and then maximize food intake, is the key to growth and survival," Auster wrote for one of NOAA's mission logs.

That wreckfish reminded us of the fight for survival

Dinner was served, but there was little to no room for the wreckfish to get in on some of the swordfish feasting action.

So the large fish did what it could in the situation and ambushed one of the small dogfish sharks instead.

"Using the [remotely operated vehicle] for cover, it demonstrated the ability of large predatory fishes to feed on smaller sharks," Auster wrote.

The video is giving researchers a lot to consider about the inner workings of the deep sea.

"This rare and startling event leaves us with more questions than answers, but such is the nature of scientific exploration," Auster wrote.