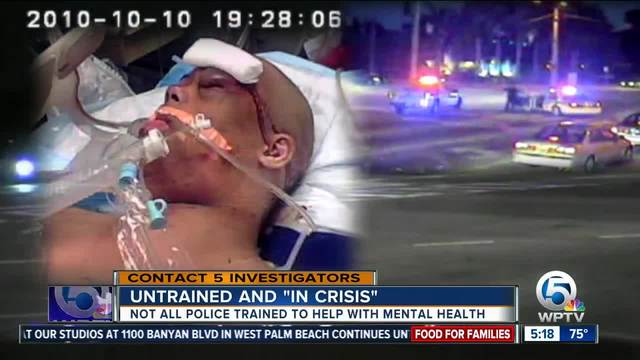 Not all police are trained to help with mental health crises. 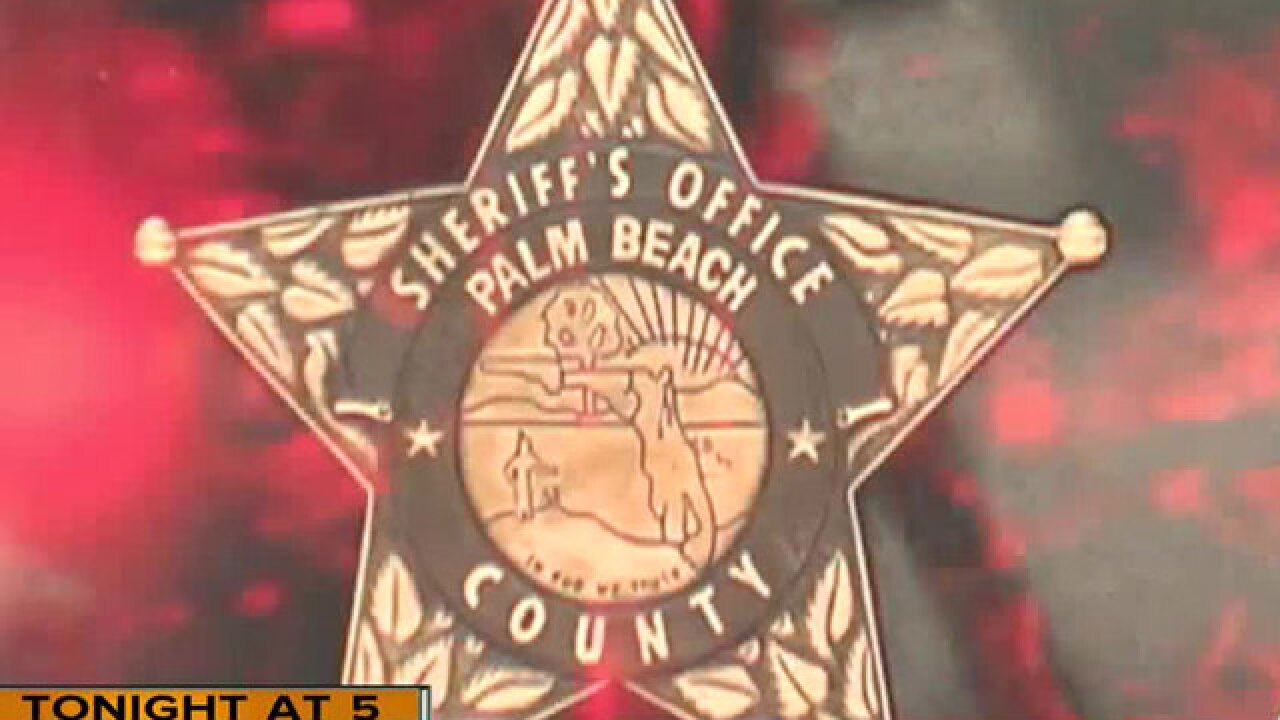 "As soon as we realized Jeremy was gone, and the minivan was gone, we put two and two together and Amy called the police."

On that 911 call, made October 10, 2010, Amy Hutton told dispatchers, “I have a 17 year old son with Down syndrome, has severe behavior problems. He apparently stole a car key off my husband's desk and took out my white '98 minivan.”

The Huttons say they called police because, “We just wanted him to be safe,” says Gary Hutton.

“I'm sure they had their sirens blaring and their lights flashing, which probably freaked him out,” said Gary Hutton.

After a slow speed chase, caught on dash cam video, deputies catch up to Jeremy at an intersection. "He (the deputy) pulls up and the officer steps out of his truck. I'm sure Jeremy is thinking uh oh, I'm in trouble, I better get out of here," said Gary Hutton. "I imagined that panicked him more than anything."

"A child who is with intellectual disabilities, just does not understand,” echoes Amy Hutton.

The deputy claimed Hutton tried to run him over, but traffic video shows just the opposite, Hutton driving away from the three deputies who stopped him.

“I didn't envision in any way in my mind that there was any end to that situation that would end up with him being shot,” said Gary Hutton. Jeremy was shot three times, one bullet landed in his head.

“They didn't understand at all. I don't think they had much training in disabilities,” said Amy Hutton.

The deputies didn't. A Contact 5 investigation found none of the three deputies involved had ever been trained to handle people with development disabilities. It’s part of a course called crisis intervention training.

“They're dealing with assessment, resolution, mental health issues. They're dealing with substance abuse, children at risk, those types of situations. The buzzword that's out there nowadays is de-escalation,” says Lee Spector, who teaches an in-depth form of Crisis Intervention Training at Indian River State College, that touches on more subjects than the more popular model. The average officer will be trained in the Memphis Model of Crisis Intervention (Team) Training.

"Mental health situations are not simple situations for a law enforcement officer to deal with," said Spector. "The most important aspect is first identifying what issues it is they are dealing with, trying to figure out if there's any immediate remedies. Most of the situations will initially involve in de-escalation type techniques. Always trying to get people to talk, communicate, relate to the officers. That's a huge issue especially nowadays."

Since 2002, there’s been at least 35 officer involved shootings with the mentally ill and disabled in our five-county area. Twenty-six were deadly. In every fatal shooting, we found not one of the officers went through CIT.

“You need to have this type of training on file,” West Palm Beach Police Officer Sanjay Raja tells us. West Palm Police tell Contact 5, they respond to about four mental health calls a day.

“The way the training taught me, is to basically slow things down, and try to get an understanding, or engage the person in a dialogue,” said Raja.

Raja was once CIT officer of the year. He was honored for talking down an armed, suicidal woman barricaded inside her home.

"You have to exhaust all your means before you do tactical. We were able to open the window and finally I was able to get the face to face. With the face to face, the subject realized that I wasn't the typical, what I believed was not the typical officer. Even though they were very derogative, they saw that I still cared," explained Raja.

Raja and his sergeant, Terry Golden, make sure all officers in the department are trained in CIT. “We have better outcomes in dealing with mentally ill or people in crisis, either armed or not armed.”

Florida doesn't require officers to train for mental health situations, beyond the training academy. All recruits on the Treasure Coast go through 40 hours of something called "Interactions in a Diverse Society."

Lee Spector says "they will be trained on how to deal with people that have different types of physical and mental disabilities."

But it’s left up to each agency whether an officer is ever trained in mental health again.

Some area law enforcement don’t do a single hour. Only a handful say CIT is mandatory for all officers. Others agencies range from one hour to 16 hours of training in mental health issues. We show you the breakdown below.

There are more than 450 deputies at PBSO (the largest agency in our area without CIT)  many of them are the ones involved in the fatal shootings.

“Every police officer should be CIT trained and it should be repeated every two years throughout their careers,” says Pam Gionfriddo, president of the Palm Beach County Mental Alliance. She also recommends asking for a CIT trained officer when calling 911 in a mental health crisis, a "little known secret." Although, she realizes CIT officers won't always be available, because not everyone is trained.

"I know that police officers do not want to kill people, they really don't. But they are reacting to the training they've gotten probably more frequently than the behavioral health training. They're trained to defend themselves. I'm just suggesting that if they got the same amount of crisis intervention training as they do (defensive) training, then they might have a different reaction," says Gionfriddo.

CIT training always improves officer safety. According to the National Alliance for Mental Health, "After the introduction of CIT in Memphis, Tenn, officer injuries sustained during responses to “mental disturbance” calls dropped 80 percent."

Lee Spector says the goal is to get everyone home safe: "Is it teaching them maybe, when that 911 call comes in, that someone's mentally ill is threatening themself, or someone, to not just run in there."

COULD CIT BE MADE MANDATORY?

The Florida Standards and Training Commission could require all police agencies to have their officers complete CIT training.

We went to Sarasota to ask them why they don’t (elaborate).

“Because it comes down to money,” says Charlotte County Sheriff Bill Prummel, a member of the Commission. CIT training is mandatory at his department. “There's a lot of things that are pushed down from the state, from the federal government and a lot of it's unfunded mandates.”

According to the National Alliance on Mental Illness, CIT saves public money. Pre-booking jail diversion programs, including CIT, reduce the number of re-arrests of people with mental illness by a staggering 58 percent.

Prummel says, currently the Florida Sheriff's Association works to secure grants to help departments, who otherwise wouldn't have the money, train in CIT, but it's not enough.

Prummel told Contact 5 he will bring up the idea of making CIT mandatory the next time the commission meets to approve courses.

WHAT CAN BE DONE?

Jeremy Hutton survived. But 7 years later, the deputies who shot him still haven’t been trained.

“We have other disabled children as well. The next time, it could be one of them. We'd like to know the people who are supposed to be protecting us, actually are protecting us because they know how to do it," said Gary Hutton.

In Palm Beach County, the largest county in our area, there are 296,000 people with disabilities, like Jeremy. Twenty-five percent of adults suffer from mental illness, 20 percent of children.

Minnesota has taken action to protect both officers and the people they are supposed to help. In June, a new law passed in the Minnesota legislature, and was signed by the governor. It said, in part, that "law enforcement will now be mandated to take a minimum amount of crisis prevention training."

The training will require law enforcement have a minimum of 16 hours of training every three years on three areas: responding to a mental health crisis, deescalation of conflicts and diversity and implicit bias training. It will be part of the training to get recertified as an officer in Minnesota. The state will give law enforcement $6 million every year for the next four years to do the training.

"It's not a silver bullet, but it's a step in the right direction," Nate Gove tells Contact 5. Gove is the Executive Director of the Minnesota Board of Peace Officer Standards and Training, the group that will administer the money for training and make sure agencies are following the law.

If you want to contact your local lawmaker about the lack of CIT training, we've made it easy for you. Click here for Florida Senate; click here for Florida Representatives. In June, they passed a law that required officers be trained in Autism Awareness, but did not fund it.

WHAT AGENCIES ARE, AND AREN’T TRAINED FOR MENTAL HEALTH:

Palm Beach County Sheriff’s Office: 1,150 of our almost 1,600 deputies are trained including some dispatchers. 544 Non PBSO are trained. 160 dispatchers trained.

Palm Springs: Provide online and classroom training. 6 officers had 40 CIT. We are over the halfway mark for CIT training. All officers required to get 2 hours online.

Vero Beach: All but 4 officers have completed CIT training.

Stuart: Does not provide Mental Health/CIT training. Told Contact 5 they’ve developed a plan to have CIT certification be mandatory, because there is a need.

Delray Beach:  All officers attend Mental Health First Aid for Public Safety training. Twelve officers and sergeants have received Crisis Intervention Team training. CIT training is based off of the Memphis model of identifying and dealing with persons in crisis who have mental health illnesses. Chief is also in the process of hiring a civilian “special population advocate,” which ideally will be a licensed clinical social worker capable of dealing with people who struggle with addiction, homelessness and/or mental health issues.

Indian River: Treasure Coast Crisis Intervention Team host 40 hours of training. It is a mandatory training for each law enforcement officer and currently 140 deputies have attended.

Lake Clarke Shores: 3 officers have been sent to CIT, 40 hours.

Palm Beach Shores: 8 hour training to deal with those during mental health crises.

Juno Beach: Has some mental illness training. All are required to attend.

Boynton Beach: They provide 8 hour blocks of de-escalation training for officers. The course focuses on Crisis Theory, mental health issues and awareness, and the practical application of verbal de-escalation techniques.

Okeechobee County: *Not a CIT county. Mandatory: Baker Act is covered in basic recruit class. No specific training mentally ill for general staff. They do offer how to deal with Baker Acts to all staff. Have a crisis negotiations team (only goes if person refuses to come outside). School resource also receives special training for dealing with children who have emotional/behavioral issues.

Fort Pierce: Treasure Coast Crisis Intervention Training (40 hours) is offered to all sworn personnel. Currently has 30 plus members certified. 60 others trained over the years, but they have retired or left department. Training is offered to 911 operators, State Corrections Officers and all members who work in mental health facilities.

Jupiter Island: “Our policies and procedures, to include those on Baker Actions and dealing with Autistic individuals, are reviewed regularly with all officers during in-service training sessions.”

Florida Atlantic University: Did not respond in time for deadline.

Riviera Beach: Did not respond to our questions.