Tracking of refusals also spotty in other states 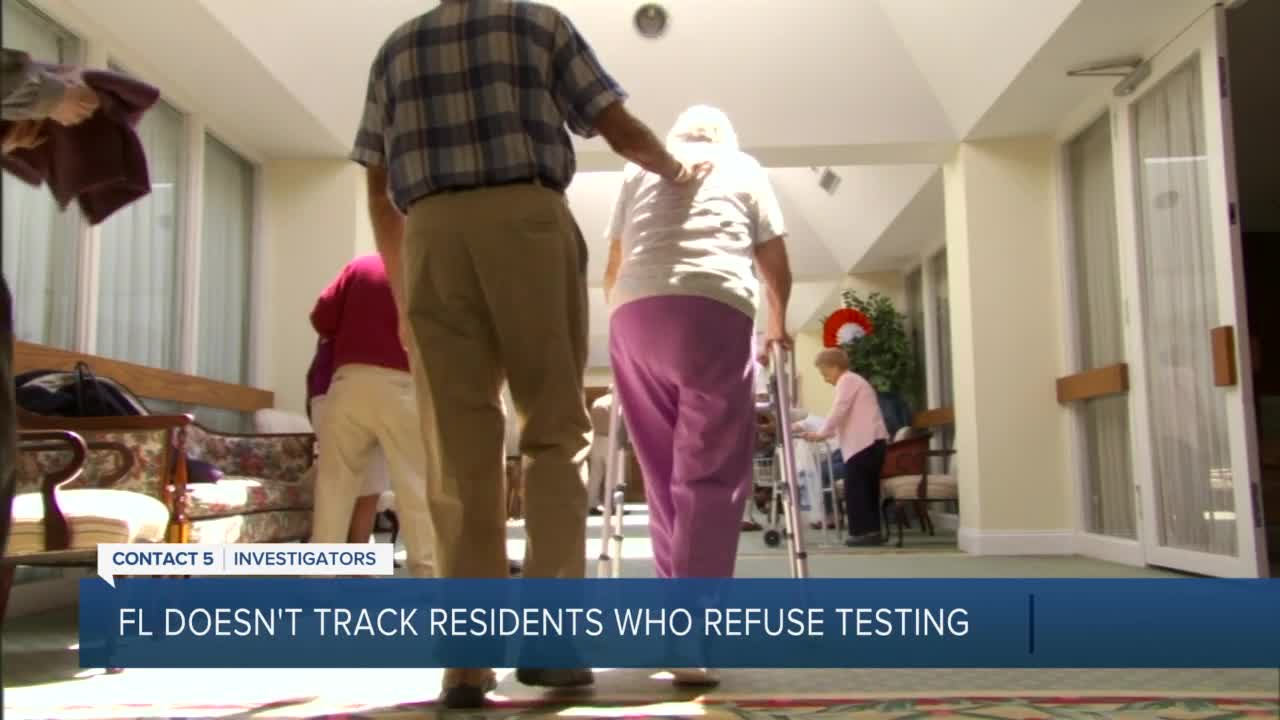 More than 100,000 residents and staff in Florida long-term care centers have been tested for the coronavirus, but the state doesn’t know how many residents have refused testing.

TAMPA, Fla. — More than 100,000 residents and staff in Florida long-term care facilities have been tested for the coronavirus, but the state doesn’t know how many residents have refused testing.

Since the beginning of the pandemic, the elderly in Florida’s long-term care facilities have remained the coronavirus' number one target.

More than half of COVID-19 deaths in Florida are linked to nursing homes and assisted living facilities.

“You have a more elderly population who mostly have underlying health conditions. You also have an environment where the virus can spread easily,” he said.

Florida is working to test every resident and worker in a nursing home or assisted living facility for COVID-19 following a federal directive last month.

More than 100,000 tests have been completed so far, according to the Florida Department of Health. With more than 350,00 workers and residents in long-term care facilities, current numbers reflect roughly 30 percent of the state’s industry has undergone testing.

But we’ve discovered while workers in these facilities are required to be tested for the virus, residents are not.

We’ve also discovered, no single agency is keeping tabs on the number of long-term care residents who refuse testing.

“You’re right. There’s not a state tracking system at this point for residents who refuse,” said Kristen Knapp, Communications Director of the Florida Health Care Association.

The organization represents nearly 600 facilities around the state.

When reporter Katie LaGrone asked Knapp if the information on refusals is important to keep track of, he said the following:

When asked why resident testing isn’t mandatory, Knapp referred us to the Florida Department of Health. Despite multiple emails to its spokespeople over the past few details, no one from the department has provided any answers.

Knapp said residents in facilities have the right to refuse testing but are monitored for signs and symptoms of the virus. According to Knapp, residents must also wear masks when they are being treated by a staff member.

Around the country, tracking long-term care residents who refuse testing is spotty.

A spokesperson for Maryland’s Department of Health told us it does keep numbers. To date, only one resident has refused testing according to a department spokesperson.

In Pennsylvania, a spokesperson from the state said they were planning to start tracking refusals in the “near future” and in New York, a spokesperson for the state’s health department said, “in some cases, residents have refused testing,” but couldn’t share any numbers.

“I think it’s terrible, it needs to be tracked,” said Terri McGuire, whose mother lived in a nursing home on Florida’s west coast.

Last month, she learned her mom tested positive for COVID-19 after a second visit to a local hospital.

While McGuire doesn’t know where her mom picked up the virus, she believes everyone in a nursing home should be tested and those who say no to testing should be tracked.

“I don’t think it’s fair for either the staff or residents there,” said McGuire.