Bait dog saved by Florida rescue to be featured on Disney+ 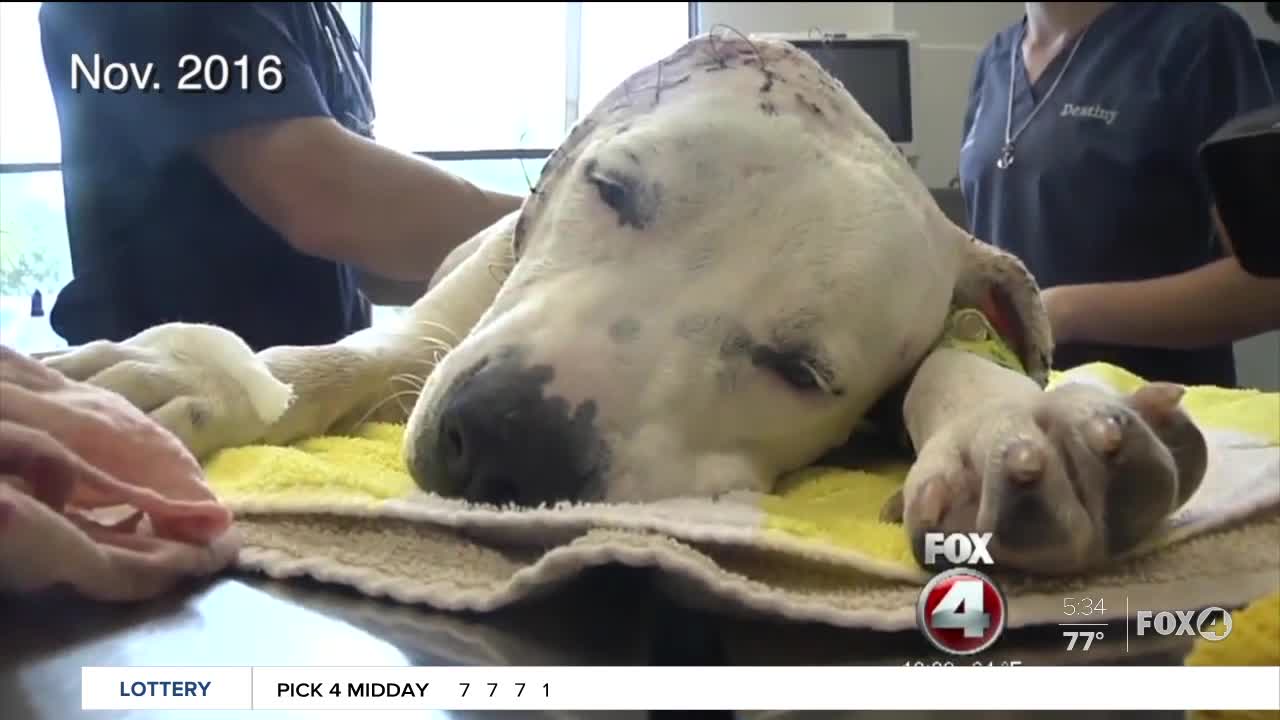 A local hero dog is making her Disney+ debut this week. Abigail is a former bait dog who captured the hearts of Southwest Florida and the world when she was rescued in 2016.

A Florida hero dog is making her Disney+ debut this week. Abigail is a former bait dog who captured the hearts of Florida and the world when she was rescued in 2016.

"She is going to be the newest Disney Princess," Megan Steinke, Abigail's adopted mom, said.

Abigail is going to be featured on the May 29th episode of "It's a Dog's Life" on Disney+. Each episode is 30 minutes long and features two working dogs and one 'Hometown Hero' dog. In this episode, Abigail will be that hometown hero.

In 2016, Abigail was was rescued from Miami-Dade County by Love is Fur Ever Dog Rescue . She was barely alive; a suspected bait dog. The entire side of her head was ripped off, and she ended up losing her ear completely. At the time, Dr. Thomas Jackson, the rescue's veterinarian, said it was the worst case he's ever seen.

"We're looking at a really long, long recovery for her," Victoria Frazier, the Founder of the rescue, said in 2016 when they first saved Abigail.

In July of 2017, Abigail found her forever home with Megan and Jason Steinke, and their dog Tala.

In the time since her rescue, Abigail and her sister Tala have become therapy dogs, and Abigail's story has captured the world. Her Facebook page, Bonnets for Abigail , has over 30,000 "likes."

"It's just been so inspiring to see the impact a dog can make on people, and really advocate for the breed of the pit bull, and help rescue dogs. Rescue dogs aren't broken. They have so much love to give, and Abigail is an example of that," Steinke said.

She said in January, they got a message on Abigail's Facebook page about an upcoming TV show on Disney+.

"Come to find out it was a gentleman from from Disney. I'm like, 'Disney? No, there's no way Disney has found us in Fort Myers, Florida.' They wanted to highlight Abigail and her story through this new Disney+ show, 'It's a Dog's Life,'" Steinke said. "Abigail does have a wonderful Cinderella story. That's what I like to call it. Former bait dog to Disney Princess. She's raising awareness on bait dogs and dog fighting rings, and animal cruelty as a whole."

The team at Love is Fur Ever Dog Rescue is just as thrilled to see Abigail on the platform.

"The beautiful girl that taught me how to feel again, she's now going to teach other people? Amazing. She can give back. She can teach others. She can show you and everyone else with a bigger reach and longer arm then I could have ever hoped for," Dr. Jackson said.

"They all have a purpose, and we're so excited to see what her continued purpose is in her life," Frazier said.

Steinke said the more they can share Abigail's story, the more awareness they can build, and the more lives she can touch.

"We're just really happy that Disney chose our little princess to be their next princess," she said.

The episode drops Friday, May 29th on Disney+.