A Florida woman learned the hard way about why you should never leave the backdoor open if you live on a lake in the rural part of Polk County.

A Lake Wales woman learned the hard way about why you should never leave the backdoor open if you live on a lake in the rural part of Polk County.

“I can still hear myself screaming,” said Joan Dick, a day after the slithering surprise.

People who live nearby probably thought she was under attack on Thursday.

And in a way, she was under attack, when she discovered a large banded water snake under a filing cabinet in the very home office where she spent all day working.

“It was horrifying, it really was. It was terrifying,” she said.

While screaming, she said she raced out of her lakeside house and drove to the vet and they called Polk County Animal Control.

“Ag deputies respond to this kind of stuff all the time because there’s snakes, and alligators that they’re always catching so they’re trained for that kind of call,” said Michele Cash with the Polk County Sheriff’s Office.

“I saw enough to know it was at least three feet long,” Dick said.

Deputies estimated the snake was more like six feet. 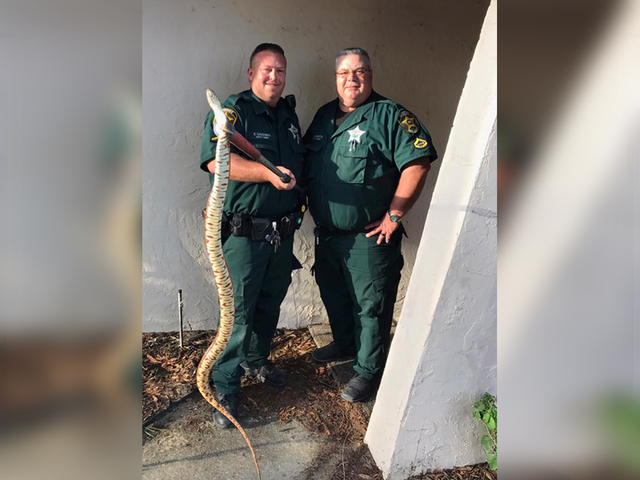 “Is it?!” She said, after learning that for the first time.

Dick let the deputies in but could not bare to watch them corral the beast.

In tropical climates, mating season for snakes can be year around, but Dick believes this one was on the move due to recent mowing around the lake.

She’s not positive, but she believes it came inside the same day she left her back door ajar.

“I will be cautious for now on because I know it’s possible,” she said.