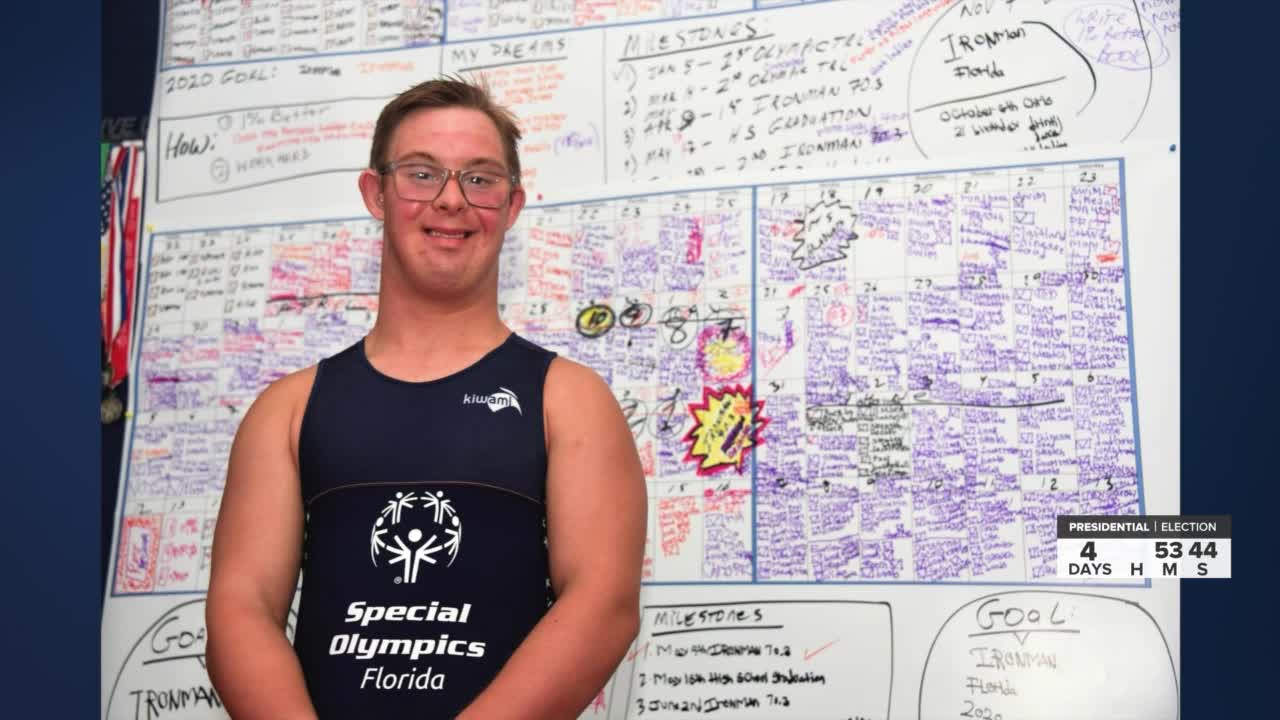 Chris Nikic will be the first person with Down Syndrome to compete in a full-distance IRONMAN competition.

MAITLAND, Fla. — Chris Nikic is determined to break barriers, and show the world what’s possible through his athletic strength and personal determination.

On Nov. 7, Nikic will make history in Panama City Beach, becoming the first person with Down Syndrome to compete in a full-distance IRONMAN competition.

The 21-year-old Special Olympics Florida athlete lives in Maitland. In May, he became the first person with Down Syndrome to complete a half-distance triathlon, which totals 70.3 miles long.

The full-distance IRONMAN triathlon includes a 2.4-mile swim, a 112-mile bike ride and 26.2-mile run for a total of 140.6 miles. The athlete’s herculean effort must be completed in 17 hours.

Nikic underwent a series of surgeries on his ears a couple of years ago. In his recovery he became sedentary and his father, Nik, had the idea to push Chris with his athletic training to try the IRONMAN. Thousands of people now send him messages on social media, and he’s realized he’s setting an example to others.

“My dad wanted me to be healthy and be included in activities with other people," said Chirs. "We picked triathlon so we could get in shape together. Triathlon races are so much fun and the people who compete are amazing.”

His favorite event is running. Nikic jokes it’s because ,“the ladies like my cute butt.”

Shane Facteau, the Chief Operating Officer for the IRONMAN Group, says Nikic’s efforts have helped other participants stay motivated since it’s been such a challenging year.

“He is taking the opportunity and there’s always risk in that of success and failure,” Facteau said.

There are Special Olympics programs in 190 countries, starting for people as young as 2. There are 60,000 athletes competing in the state of Florida and 38,000 volunteers who work with them. Dan Grieb is Nikic’s training partner.

“In this world I’ve learned that a hug can solve a lot of problems. That some of the greatest among us are people that we label with words like disability. And the ways that we teach them to be successful if we all just listen are the same things that we need to be successful. And lastly that people like Chris just want the exact same things that you or I do,” Grieb said.

Grieb says it’s vital we give every person a chance to succeed.

Grieb found Nikic overcomes some obstacles other people would struggle through, like swim training in challenging surf.

“He is going to live a really, really fun life because he’s going to be able to participate in just about anything, because If you can do IRONMAN you can do anything,” Nik Nikic said.

In 2022, Nikic hopes to qualify for the Special Olympics USA Games taking place in Orlando. He also has goals to one day buy a house, drive a car and get married.