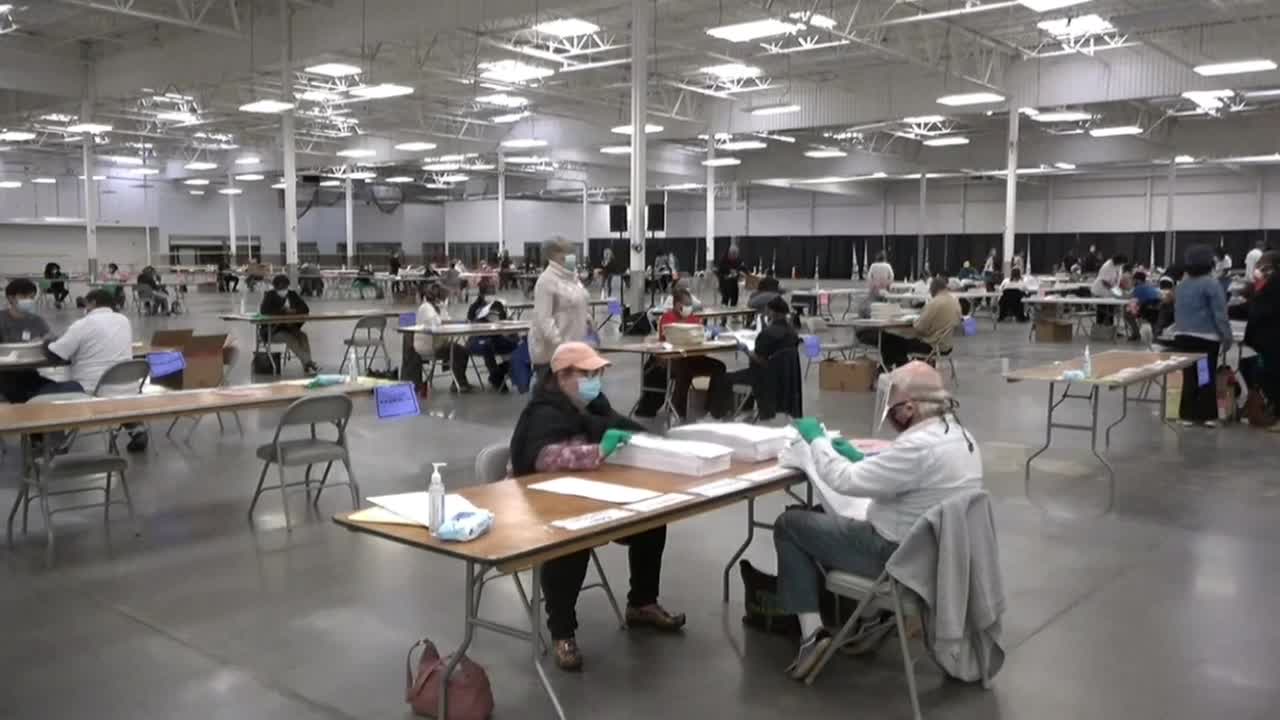 A hand tally of the nearly 5 million votes cast in the presidential race in Georgia appeared to be going smoothly as it entered its fourth day Monday.

ATLANTA (AP) -- A hand tally of the nearly 5 million votes cast in the presidential race in Georgia appeared to be going smoothly as it entered its fourth day Monday.

The hand count stems from a state law that calls for one race to be audited to ensure the new election machines counted the votes accurately. It was not the result of any suspected problems with the results.

It was up to Secretary of State Brad Raffensperger to select the race to be audited and he said the presidential race made the most sense because of its significance and the tight margin separating the candidates. Because of that small margin -- Democrat Joe Biden leads Republican President Donald Trump by about 14,000 votes -- Raffensperger said a full hand recount was necessary.

Trump, who has made unfounded claims of voting irregularities and fraud, and his supporters took to social media over the weekend to criticize the way the state's hand tally was being conducted. Raffensperger responded in social media posts of his own disputing their claims.

County election officials were instructed to start the count by 9 a.m. last Friday and to finish it by 11:59 p.m. this Wednesday. The deadline for the state to certify election results is this Friday, Nov. 20. Raffensperger acknowledged last week that the hand tally would be a "heavy lift" for the counties.

Representatives for the secretary of state's office said Monday that they didn't know how many counties had finished and said they wouldn't release any results from the tally until the whole thing was complete.

Masked workers divided into two-person audit teams sorted paper ballots into piles for each candidate and then counted each pile by hand. Bipartisan panels were on hand to review certain ballots, including those where the auditors couldn't agree on the voter's intent and those with write-in candidates.

Monitors, appointed by local Democratic and Republican parties, were allowed to circulate among the auditing stations but could not touch ballots or record anything. News media and members of the public were also allowed to observe but were required to do so from a designated area.

Fulton and DeKalb counties -- two of the state's most populous -- spent Friday setting up for the tally and then workers began sorting and counting ballots Saturday. Both counties had hundreds of workers on hand and said they managed to finish counting by Sunday evening.

At peak times, Fulton County had more than 170 two-person audit teams working at the Georgia World Congress Center in downtown Atlanta to recount more than 528,000 ballots. Split into two shifts each day, about 300 workers in DeKalb County tallied the roughly 370,000 ballots cast in the Nov. 3 election.

Cobb County elections director Janine Eveler said in a video posted on the county's Twitter feed Sunday evening that workers had gotten through about half of the county's nearly 400,000 ballots and were on track to finish on time. Some of the ballots counted Friday would have to be recounted again because workers were sorting the ballots by hand and then running them through counting machines, rather than counting them by hand, she said.

Raffensperger's office has said it's likely the results will differ slightly from those previously reported by the counties but that the difference is not expected to be enough to change the outcome. The tally resulting from the audit is what will be certified, election officials have said.

The AP has not declared a winner in Georgia, where Biden leads Trump by 0.3 percentage points. There is no mandatory recount law in Georgia, but state law provides that option to a trailing candidate if the margin is less than 0.5 percentage points. It is AP's practice not to call a race that is - or is likely to become - subject to a recount.

Once the results are certified, the losing campaign can request a recount, which would be done using scanners that read and tally the votes, Raffensperger said.