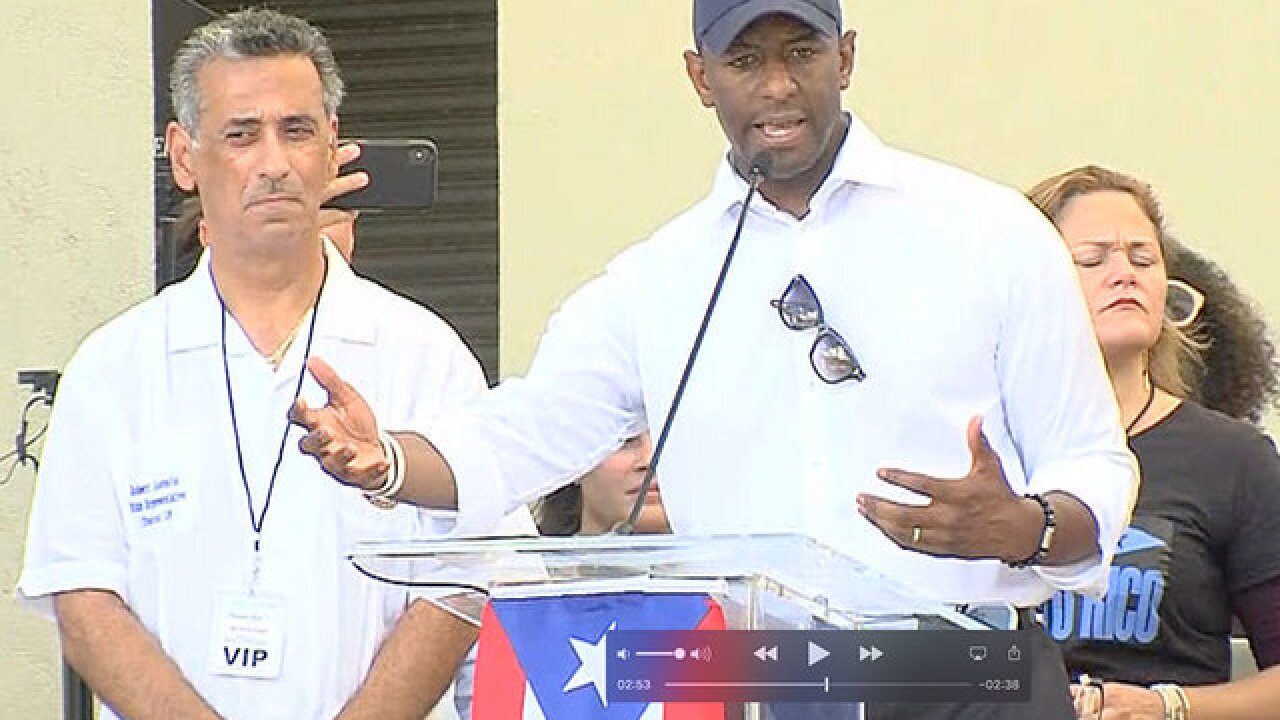 UPDATE: 4:15 p.m.
Democratic Florida gubernatorial nominee Andrew Gillum made a surprise appearance at the protest for Puerto Rico.  The appearance wasn't listed on Gillum's itinerary for today or on the rally's program.

"I want to remind this country to do right by the people of this country," Gillum speaking on the devastation that is still plaguing Puerto Rico after Hurricane Maria.

The “Trump Baby” balloon first appearance in #WestPalmBeach at the rally in support of Puerto Rico. @WPTVpic.twitter.com/l9O9zHzczU

Protesters passed Mar-a-Lago in their cars and trucks honking their horns and waving Puerto Rican flags.  Now they are on their way to the Meyer Amphitheater to start their rally.

According to WPTV Reporter Jillian Idle, plans for the protest for Puerto Rico have changed.  Organizers say the buses they planned to use to protest outside of Mar-a-Lago are having an issue navigating the bridges crossing the Intracoastal.

This last-minute challenge has the caravan dropping off passengers at the Meyer Amphitheater, then getting into cars and driving to Palm Beach.  The protesters do not plan to get out of their cars, but they will wave signs as they circle around and drive past Mar-a-Lago. Palm Beach Police says this will happen around 1:30 p.m. on Saturday and they expect minimal traffic delays.

Then the protesters will head back to the Myer Amphitheater to start their rally.

One of six Baby Trump Balloons will be making its first appearance in Palm Beach County this afternoon at a protest and rally commemorating Hurricane Maria's hit to Puerto Rico according to The Palm Beach Post.

Later today, protesters will be caravaning to Mar-A-Lago from Miami.  Their chief mission is to persuade lawmakers to send more aid to storm-ravaged Puerto Rico.  President Trump is not there, but over nine groups are assembling together in hopes their message will be heard.

The protesters say the island needs more attention from Congress and the Administration.  They want leaders to adopt an agenda that will put Puerto Rico's economy on the road to future growth and prosperity.

Afterward, they are expected to rally at the Meyer Amphitheater on Evernia Street along the waterfront in downtown West Palm Beach.

Hurricane Maria made landfall just over a year ago.

WPTV Reporter, Jillian Idle, will be covering this story today.