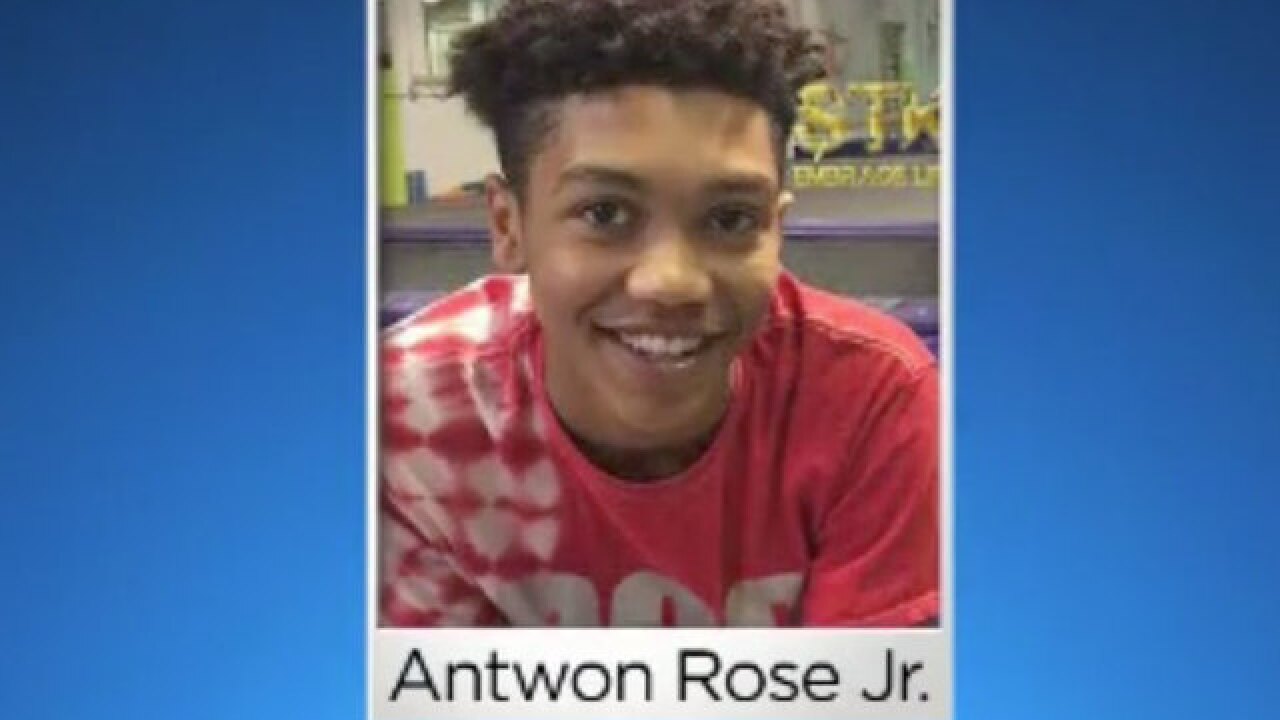 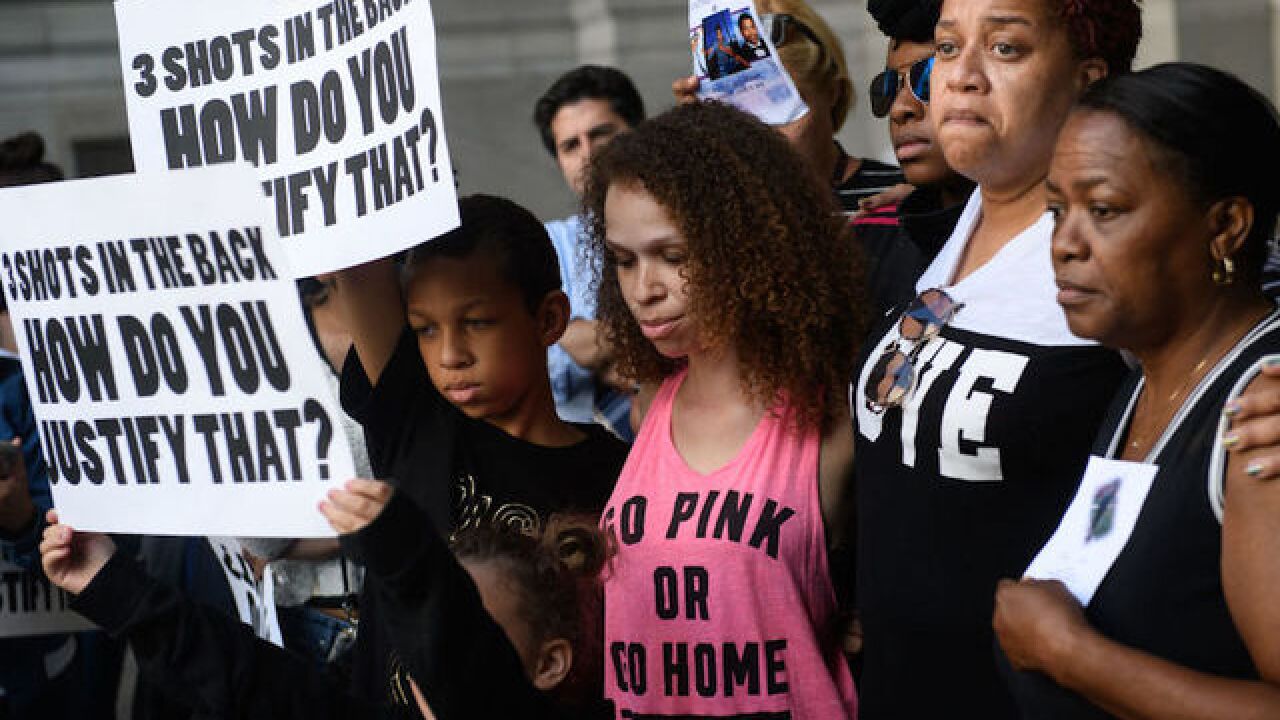 New details, included in the criminal complaint against Rosfeld, indicate Antwon was shot in his face, right arm and the middle of his back. It also states that Antwon was in a car suspected in an earlier shooting but did not appear to be the shooter, and that Rosfeld made inconsistent statements about whether he believed Antwon had a gun when the officer opened fire.

"I find that Rosfeld's actions were intentional," Zappala said, emphasizing that Antwon was not armed. "He was not acting to prevent death or serious bodily injury."

Rosfeld was arraigned Wednesday morning and his bail was set at $250,000, court records show. The bail is unsecured, a court document said, meaning the officer will not have to put up any money or assets.A preliminary hearing is set for July 6. The officer is on unpaid leave, his lawyer told CNN affiliate WTAE.

Attorney Pat Thomassey, who is representing Rosfeld, could not be reached for comment, but he told WTAE that Rosfeld is seeking counseling because "there's a young boy that's not with us and he's not happy about that." However, the attorney said, he's not sure what Rosfeld was supposed to do, given the situation.

"I don't think it's a murder case. I don't. I don't know if there were mistakes made in police procedure -- that's to be determined later -- but I don't see it as a murder case," Thomassey told the station, adding that, at most, it's an involuntary manslaughtercase.

"There is still a long road ahead to a conviction and proper sentencing," he said. "We know that to get from protests to policy is a marathon, not a sprint, and we hope that this case has the endurance to change the landscape of the country on this important issue of police brutality."

Rosfeld, 30, shot Antwon three times June 19 as he fled a car after a traffic stop. According to Allegheny County police, Antwon was a passenger in a car that authorities suspected of being involved in an earlier shooting in nearby Braddock.

The East Pittsburgh officer pulled the car over and ordered the driver out of the car and onto the ground, police said. Antwon and another passenger "bolted" from the vehicle, and Rosfeld opened fire, striking the teenager, police said.

The criminal complaint against Rosfeld contains a lengthy narrative providing new details about Antwon's death and the earlier shooting.

Officers from East Pittsburgh, North Braddock and Braddock initially responded to a report of shots fired in an area of North Braddock known for drug crimes and shootings. Witnesses told officers a passenger had fired from a tan or gold Mercury with aftermarket wheels, then fled, the complaint said.

Within minutes, police identified a victim with a gunshot wound to the abdomen, and the vehicle description was updated to a light gold Chevrolet Cruze with tinted windows, according to the complaint.

Police obtained surveillance video from the scene and collected shell casings from .45- and .40-caliber weapons. The video showed a black man in a dark shirt roll down the Cruze's rear passenger window and open fire with a handgun.The alleged shooter has been identified as Zaijuan Hester, a juvenile. He will be tried as an adult, Zappala said.

The front passenger window remained closed. A man on the sidewalk with the gunshot victim returned fire.Police are looking for that shooter, Zappala said.

About a mile and a half away, officers responded to the scene where Rosfeld had pulled over a light gold Cruze with its rear window broken and with two bullet holes, one in the trunk and one in the front passenger door, the complaint said. Rosfeld's vehicle was parked 24 feet behind the Cruze.

The driver was in custody and another passenger had fled on foot. Antwon had been shot and taken to a hospital. According to the medical examiner, bullets hit Antwon on the right side of his face, exiting near the bridge of his nose, inside the right elbow and to the right of his spine. The shot to the back was fatal, as it hit Antwon's lung and heart, the complaint said.

Officers pursuing Hester later found a black shirt, which was collected as evidence. Hester was arrested this week and will be formally charged with aggravated assault, possession of a firearm by a minor, receiving stolen property, persons not to possess firearms and criminal attempt in the North Braddock shooting,Allegheny County police spokeswoman Amie Downs said Wednesday.

Rosfeld waffles on seeing a gun?

Witnesses at the second scene told investigators Rosfeld ordered the driver out of the car and appeared to handcuff him before turning his attention to the other occupants, one of whom fled between a home and a senior center, the complaint said. Rosfeld shot three times, hitting one of the men, whose hands were empty, witnesses said. The passenger identified as Hester fled amid the gunshots, according to the complaint.

As they drove past a market in North Braddock, the driver said he heard the person in the back seat ask, "Is that him?" The driver then heard gunfire and drove toward East Pittsburgh. When detectives showed the driver a photo of Antwon, the driver said that was the person he knew as Javon, the complaint said.

Investigators found two guns under the passenger seat: a 9mm Glock with a 17-round clip missing one bullet and a .40-caliber Glock with an extended clip containing 18 rounds, the complaint said. The .40-caliber was determined to have discharged the casings found at the scene of the North Braddock shooting. The 9mm was never fired, Zappala said.

"By all accounts, Mr. Rose never did anything in furtherance of any crimes in North Braddock," Zappala said. "I know there's been some speculation in the media."

At the hospital, police collected Antwon's belongings, including a light-colored T-shirt and an empty magazine for the 9mm Glock.

Speaking to police, the complaint said, Rosfeld said his intention had been to get all three occupants on the ground as he awaited backup. After ordering the driver onto the ground, he said, the front seat passenger exited the vehicle and "turned his hand toward Officer Rosfeld and he, Officer Rosfeld, saw something dark that he perceived as a gun." He stepped out from behind his car door for a better view and opened fire, the officer told investigators.

Asked again to recount the events, Rosfeld "told the detectives that he did not see a gun when the passenger emerged and ran. When confronted with this inconsistency, Rosfeld states he saw something in the passenger's hand but was not sure what it was," the complaint said.

In a statement, Reggie Shuford, executive director of the American Civil Liberties Union of Pennsylvania, called the charges against Rosfeld a "necessary step for accountability."

"The action should not stop here," he said. "Wide-reaching reforms must be implemented for the entire department so that officers do not repeat deadly mistakes. While policing is necessarily local in nature, internal reforms should serve as models for departments nationwide."

Rosfeld had been sworn in to the East Pittsburgh police force just hours before the shooting, the complaint said. He'd worked with other local departments for seven years, CNN affiliate WPXI reported.

Antwon's death sparked days of protest in Pittsburgh, a 15-minute drive west of East Pittsburgh. The teen was laid to rest Monday.