Portland mayor bans use of tear gas on demonstrators 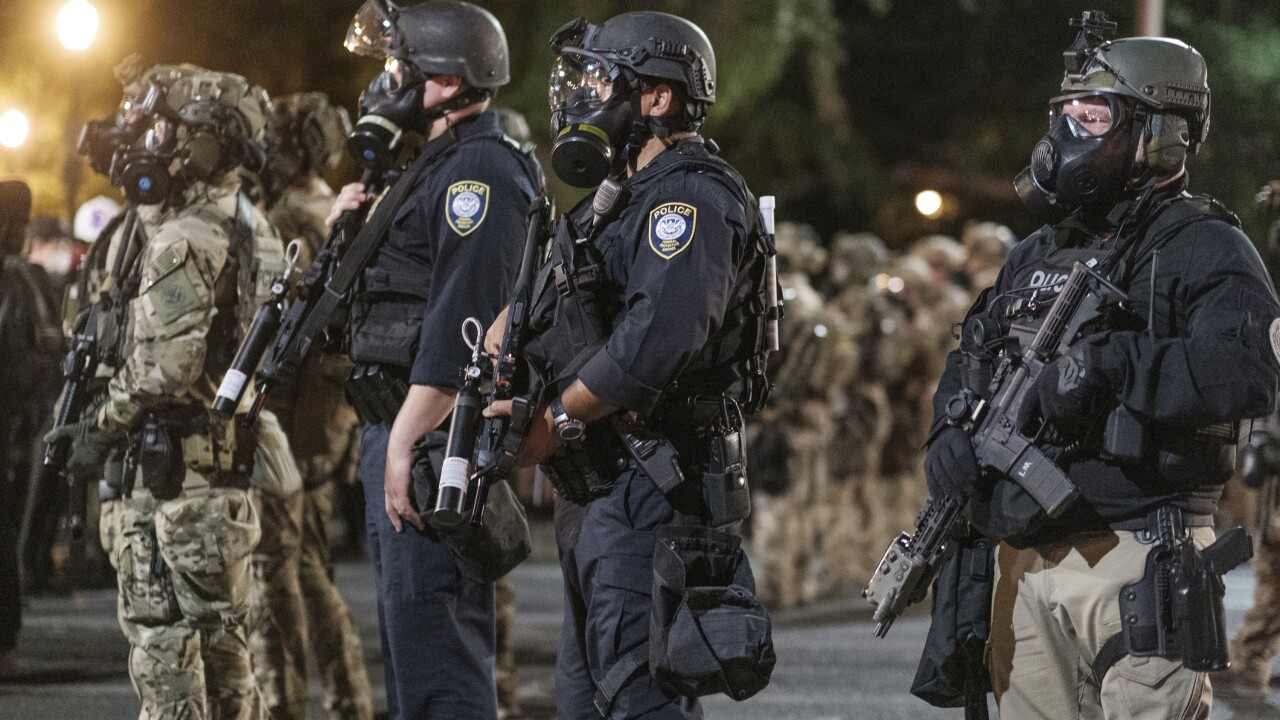 Doug Brown
Doug Brown/AP
In this photo provided by Doug Brown, agents from different components of the Department of Homeland Security are deployed to protect a federal courthouse in Portland, Ore., on Sunday, July 5, 2020. Protesters who have clashed with authorities in Portland are facing off not just against city police but a contingent of federal agents who reflect a new priority for the Department of Homeland Security: preventing what President Donald Trump calls "violent mayhem." The agents clad in military-style uniforms include members of an elite Border Patrol tactical unit, and their deployment to protect federal buildings and monuments is a departure for an agency created to focus on threats from abroad. (Doug Brown via AP)

After months of protests, sometimes becoming violent, Portland Mayor Ted Wheeler announced Thursday that the city is banning the use of tear gas by his city’s police.

Wheeler said everyone has an obligation to create change, and now is the time to change the city’s policy on using tear gas.

“During the last hundred days Portland, Multnomah County and State Police have all relied on CS gas where there is a threat to life safety,” Wheeler said. “We need something different. We need it now.

The police responded on Thursday by saying gas is a tool needed by officers to control crowds when protests become violent.

“Banning the lawful use of CS will make it very difficult to address this kind of violence without resorting to much higher levels of physical force, with a correspondingly elevated risk of serious injury to members of the public and officers,” the Portland Police said in a statement. “CS, while effective, is a significantly lower level of force than impact weapons, which would very likely be necessary to disperse riotous groups with its prohibition. We do not want to use gas. We do not want to use any force.”

As to why tear gas is used instead of police going in to make an arrest?

“To make an arrest in the middle of a crowd intent on destruction and injuring people, it takes considerable resources--large numbers of officers that we do not have,” the police said. “Not only do we not have enough PPB officers to respond in this manner, our area partners have stated they will not come to our aid, given the climate in Portland.”

The city’s downtown has dealt with protests and unrest since Memorial Day following the death of George Floyd in Minneapolis. Adding to the challenges for law enforcement in recent weeks, counter-protesters have arrived and clashed with Black Lives Matter supporters.

The unrest culminated on August 29 when Aaron Danielson was shot and killed. The suspect in the case, Michael Forest Reinoehl, was later killed by US Marshals in Olympia, Washington. The US Department of Justice claimed that Reinoehl was a supporter of ANTIFA. The Associated Press reported that Danielson joined the counter-protest as part of a group known as Patriot Prayer, which aligns itself with President Donald Trump and that allegedly shot paintballs at protesters in Portland.