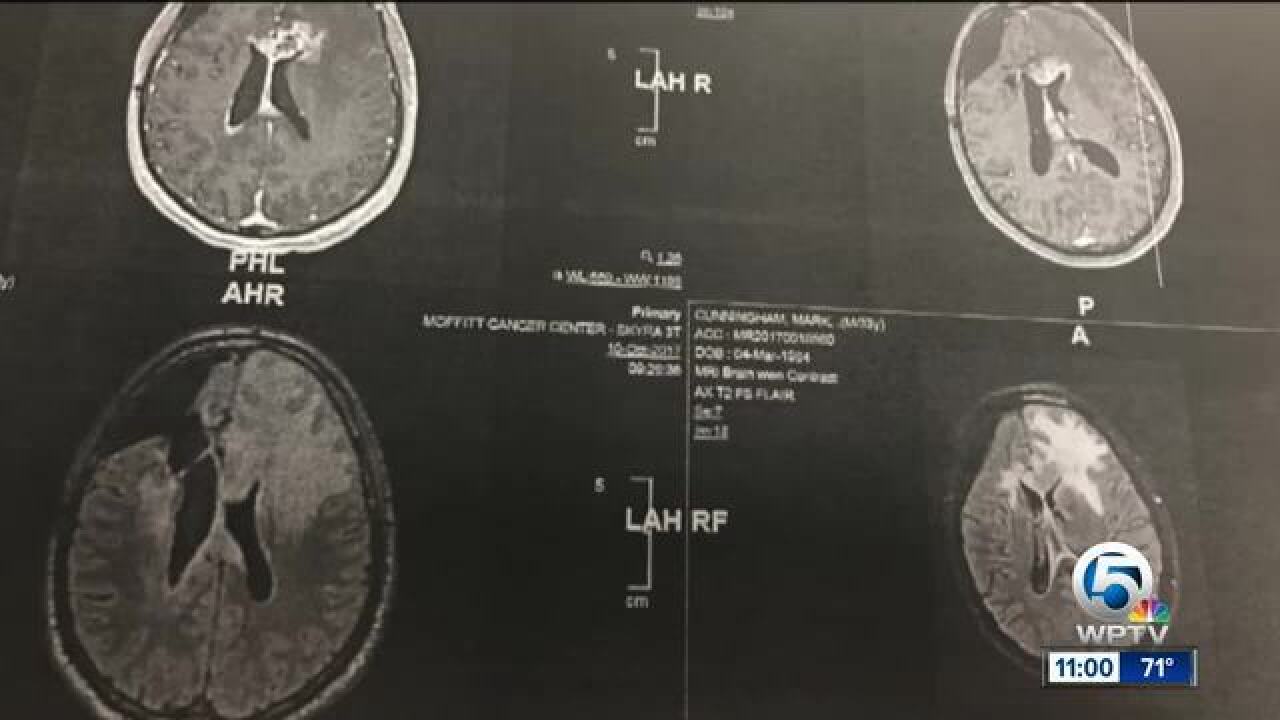 A devastating coincidence, or a bigger issue?

It’s an aggressive and deadly form of brain cancer that affects only about 13,000 people in the U.S. each year.

In a town of just 45,000 people, glioblastoma patients and their families want to know if there is something leading to their illness.

Eleven patients or surviving family members found each other only through word of mouth over the last year.

The victims found a common trend between themselves: they live at most about seven miles apart. The majority are within five miles of each other. Some even lived on the same street at one point. In one case, two patients lived in the same house, though over a span of 20 years.

The patients who have had the chance to meet say they all lived a bulk of their lives in or near the 34982 zip code.

The 11 current cases that have been discovered were diagnosed within the last five years, affecting people as young as two and as old as in their 70.

The majority are younger than the average age for a glioblastoma diagnosis.

Stephanie Ankiel-Cunningham’s husband, Mark Cunningham, 34,  was diagnosed with glioblastoma in 2016. He was healthy growing up and always active, until a sudden seizure in 2016.

“He went to the gym sometimes twice a day,” Ankiel-Cunningham said. “I thought maybe it was too much protein … In reality, it was glioblastoma.”

The diagnosis has changed their lives completely, and the bills are piling up — Ankiel-Cunningham says her family has paid $50,000 in medical expenses since 2016.

It’s the cost of keeping Cunningham around as long as possible, to watch their 6-year-old, Kendal, grow up.

“I can’t worry about the money part. Im worried about him,” Ankiel-Cunningham said.

When Cunningham's mobility and personality started to change, she started looking for local support.

Expecting to find maybe a couple people who have experienced glioblastoma to give her guidance, she found so much more: like 33-year-old Lenny Schelin Jr., who grew up in Fort Pierce. He was diagnosed in 2017 with glioblastoma.

“When the doctor came out and showed me the picture from the cat scan and said you’ve got brain cancer, I said you got the wrong patient,” Schelin said.

Cunningham also found Mitzi Macias, whose mother-in-law passed away in 2016 after being diagnosed with glioblastoma in 2013.

“She was never sick a day in her life,” Macias said. Her mother-in-law lived within the 34981 zip code.

It was not until Kevin Perry's diagnosis that they learned someone who lived in their same home had been diagnosed with glioblastoma nearly 20 years ago.

“We knew our former landlord passed away from cancer, but it wasn’t until I spoke with Stephanie that I found out it was glioblastoma,” Ronna Perry siad.

Greg Harmon’s son only lived 21 months. Gregory Harmon III lived along Roselyn Avenue, and was diagnosed and passed away in 2016.

Lela Abbate's brother, Robert Haselgrove, was diagnosed in November 2016. He died three days later. He lived in the 34982 zip code the majority of his life.

Even more victims have been diagnosed with glioblastoma, but did not want their information contributed to this story.

Once the majority of the 11 patients or living family members tracked each other down, they created a support group. One goal of the group: Getting to the bottom of whether or not there is an environmental factor that could be making them sick.

Dr. Henry Friedman, a neuro-oncologist and Deputy Director of the Preston Robert TischBrain Tumor Center at Duke University, weighed in.

However, without looking at individual cases and health histories, he can only speak on the surface facts: Age, location and the number of cases that the local patients have uncovered.

“It certainly seems like a higher number than one would expect during that common timeframe in such a small denominator as the size of that town,” Friedman said.

However, he also said it can be extremely hard and time consuming for anyone to prove an environmental cause for illness.

Friedman says the only known contributor to glioblastoma is exposure to radiation. The Florida Department of Health in St. Lucie County recently met with the support group of local glioblastoma patients.

The health department will offer them any available services. Local health officials are talking with state health officials about the best way to move forward with the patients’ concerns over the number of local cases.

Stephanie Ankiel-Cunningham is raising money to help continue to pay for her husbands growing medical bills.

Most of the glioblastoma patients have moved to new homes over the years.