Love and deception: How a fake teen doctor ended up behind bars 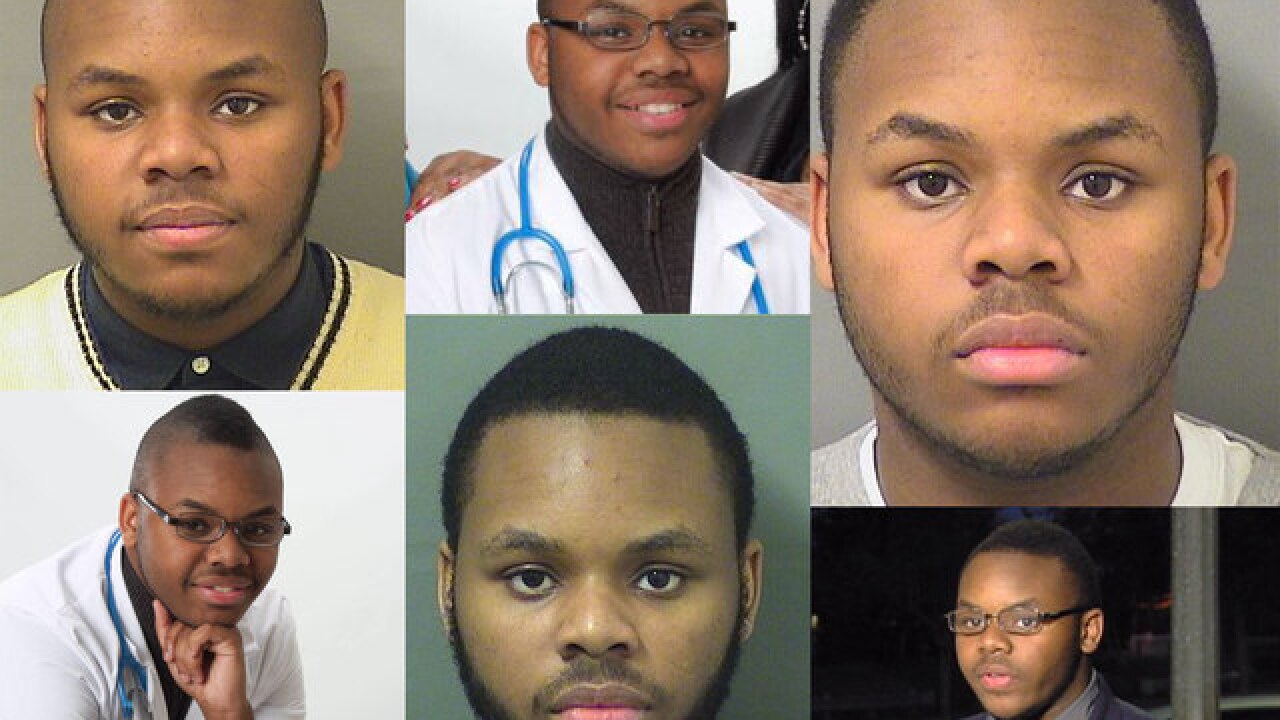 It's a case that made national headlines. A teenager posing as a doctor, none other than "Dr. Love."

He said he held several degrees, including a Ph.D. and a M.D.

What his patients didn’t realize was that he was just 18 years old.

The Palm Beach County Sheriff’s Office built an extensive case against Love-Robinson, arresting him on a slew of charges.

Investigators said he stole more than $30,000 from an elderly woman he claimed to treat with vitamins.

The fake teen doctor pleaded guilty earlier this year to practicing medicine without a license and fraud charges.

She tried going to the gastroenterologist several times but couldn’t find relief.

She decided to look elsewhere and try a homeopathic doctor.

He was listed as a naturopathic doctor at New Birth New Life Medical Center of West Palm Beach in 2015.

Love-Robinson referred to himself on their website as “Dr. Love” and came to Morrison’s home several times to treat her. Promising relief, Love-Robinson went to a store and bought Morrison Valerian and Melatonin, Morrison told a detective in a February 2016 interview.

“He said he’d like to examine me,” Morrison said in court documents. “Listen to my heart, lungs.”

She said he told her she suffered from arthritis. But, Morrison said none of her previous doctors diagnosed her with the ailment.

“He said he could treat it with vitamins.”

Morrison said one time she was in such excruciating pain she called Love-Robinson, who agreed to come right over.

“He said I won’t be able to handle you, you have to go to the hospital, and he called 911," Morrison said.

Love-Robinson called 911, saying his name was “Dr. Love” and needed first responders immediately for one of his patients.

An ambulance took Morrison to the hospital and Love-Robinson was left alone in her home.

That’s when investigators believe he stole several checks from her.

She said he visited her in the hospital that evening and told her to take several expensive tests that a specialist later told her she didn’t need.

“Now, I wonder how the hospital let him through,” Morrison said.

Shortly after Morrison’s hospital visit, she discovered money missing from her bank account through checks she did not write.

A check made out to “Dr. Malachi A. Love” for $500 had a signature she didn’t recognize.

Another check made out to New Birth New Life Medical Center for more than $1,200 also had a forged signature. And a check worth tens of thousands of dollars from Morrison’s account was addressed to Nissan for car payments with Love-Robinson’s name in the memo.

It was then she contacted authorities.

The Palm Beach County Sheriff’s Office launched an undercover operation with the Florida Department of Health in order to arrest Love-Robinson for impersonating a physician.

An ATM drive through camera captured Love-Robinson in his red Nissan Maxima depositing a check he stole.

“I found it very odd that a ‘doctor’ at the age of 18-19 years old runs errands in a white coat, full name badge, and a stethoscope,” a bank teller recalled.

“Anytime I set up appointments for him to come in and set up his business accounts, he never showed up,” the bank teller said. “I think it was due to lack of credibility.”

A detective could not find Love-Robinson in the Florida licensing registry and discovered he’s not a licensed physician in the state of Florida.

Investigators set up a sting at Love-Robinson’s office on the 4700 block of N. Congress Ave. to catch him in the act.

An undercover agent arranged to have a physical exam by “Dr. Love.”

Love-Robinson checked her blood pressure and told her she’s healthy.

That’s when she gave deputies the cue to arrest him.

Love-Robinson spoke briefly with a detective inside the jail in the hours after his arrest.

“Ms. Morrison called me, she had some questions about alternative medicine,” Love-Robinson explained to the detective.

“So you went to her house?” The detective pressed.

“Yes, and I made sure I told her I was not a doctor and I wanted to make sure she understood that I was there to answer questions she had,” Love-Robinson said.

“Did you give her any medicine? Did you sell her anything?” the detective asked.

“I didn’t sell her a thing. Ms. Morrison asked me what vitamins I thought were good and she asked me to go out and get them for her and then she would just pay me for what the medications cost. So I actually never received any payment.”

Listen to the full interview below

This was not the first time investigators looked into the teen.

In 2015, he was found wandering the halls of  St. Mary’s Medical Center wearing a white lab coat at 17 years old. He claimed he was shadowing an OBGYN, nonetheless West Palm Beach Police arrested him after not finding any such doctor.

The Florida Department of Health found the teen never enrolled nor graduated from the  Southwest College of Naturopathic Medicine & Health Sciences (SCMM) in Arizona as he claimed. He did visit the school once.

He previously worked for a Boynton Beach company posing as a homeopathic doctor.

Love-Robinson was served a notice to cease and desist and several other citations by the Department of Health while at the company.

The company accuses him of attempting to open accounts using the company's name to pay his personal bills.

While out on bond, Love-Robinson was arrested at a car dealership in Stafford, Virginia for trying to purchase a car using fraudulent information in September 2016.

According to the Stafford County Sheriff's Office, Love-Robinson completed an online credit application in order to purchase a $35,000 Jaguar.

A dealership employee contacted authorities when they became concerned that Love-Robinson may have been trying to fraudulently obtain the Jaguar and may be stealing money from a relative.

A Virginia Judge sentenced him to one year in jail.

The teen was transferred back into Palm Beach County Jail in September after completing the sentence.

“I’m not pleading guilty because honestly, my attorneys will handle that,” Love-Robinson said in a 2016 press conference after he was released from jail.

In a last minute deal, Love-Robinson agreed to plead guilty to grand theft, practicing medicine without a license and fraud charges in Jan. 2018.

He will serve 42 months in prison but has some credit for time served.

"He was always trying to help people," said Love-Robinson’s grandfather, William McKenzie. "He just made some wrong choices."

A judge ordered Love-Robinson to pay his victims more than $80,000 in restitution.

“I think he’s going to be alright in the long run,” McKenzie said.

Teen charged with practicing medicine without a license released from jail