Teens who sleep less are more likely to engage in risky and suicidal behavior, study says 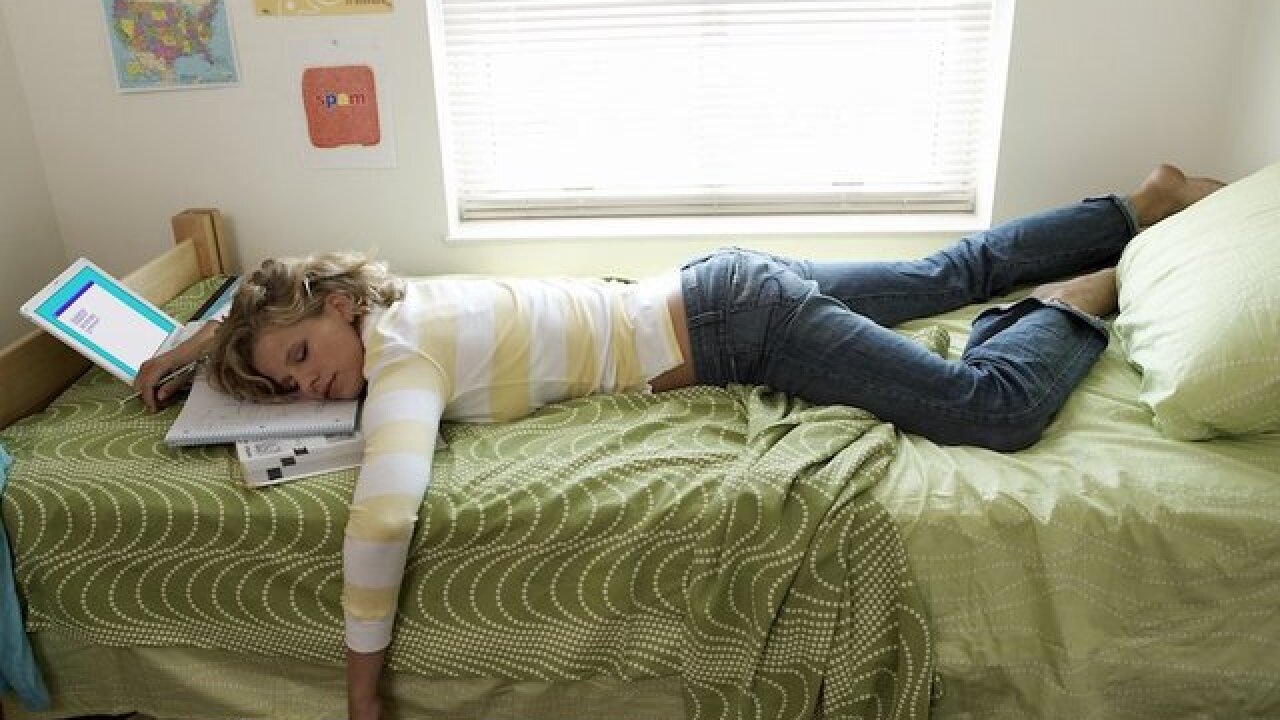 © 2018 Cable News Network, Inc.
&lt;p&gt;Fewer hours of sleep on school nights were associated with a rise in unsafe behaviors.&lt;/p&gt;

The amount a teenager sleeps is associated with how likely they are to engage in risky and suicidal behavior, a new study said.

"Fewer hours of sleep on an average school night [is] associated with increased odds of all selected unsafe behaviors," the authors wrote, including risk-taking while driving, such as drunken driving, potentially unsafe sexual activity, aggressive behavior and use of alcohol, tobacco and other drugs.

Participants' sleep duration was categorized as eight hours or more, seven hours, six hours or less than six hours and then measured against high-risk behaviors, in the study published Monday in the journal JAMA Pediatrics.

The team found the strongest associations in relation to mood and self-harm. Teens who slept for less than six hours per nightwere three times more likely to report considering suicide, planning a suicide attempt or attempting suicide, compared with teens who slept eight hours or more. They were also four times more likely to have reported a suicide attempt that resulted in them needing treatment.

The researchers used data from from February 2007 to May 2015 from the Youth Risk Behavior Survey, a U.S.-based survey exploring behaviors related to health risks in youth, and found that more than 70 percent of high school students were getting less than the recommended eight hours of sleep per night.

"Prior reports have documented that high school students who slept less than eight hours were at increased risk of adverse self-behaviors," said Matthew Weaver, instructor in medicine at Harvard Medical School and associate epidemiologist in the Division of Sleep and Circadian Disorders at Brigham and Women's Hospital, who led the study. "Our study adds to this literature by using a larger updated data set over a longer study interval and by incorporating more granular sleep information and looking at a wider array of risk taking behaviors."

The sample size and categorization of sleep duration were beneficial to the study, according to Reut Gruber, director of the Attention, Behavior and Sleep Laboratory at the Douglas Mental Health University Institute and associate professor in the Department of Psychiatry at McGill University. Gruber was not involved in the study.

"I think it reinforces what we believe is the case," Gruber said, "I'm not sure each one of the findings is completely a surprise or new, but it does certainly validate what we think. Sometimes, the challenge with other studies, they might be much smaller, or the sample might not be selected properly, might be biased, so I think the methodology in terms of the sampling and sample size is a real strength."

Weaver and Gruber both note the limitations of the study include the fact that the data are self-reported by participants and that the research does not show a causal relationship between sleep and higher risk behaviors.

Gruber advises parents to stay on top of their child's sleep schedule, as teenagers are not always able to manage their own sleep and may not know when is the best time to turn out the lights.

"I think my message to parents is that it is a priority. It will make a huge difference in their children's lives and performance and mood and behavior," Gruber said. "My experience, my impression, is that it's something that we still need to prioritize as parents just like what we do with other things we know are unhealthy for kids."