Man reunites with stranded dog in the Bahamas after Hurricane Dorian 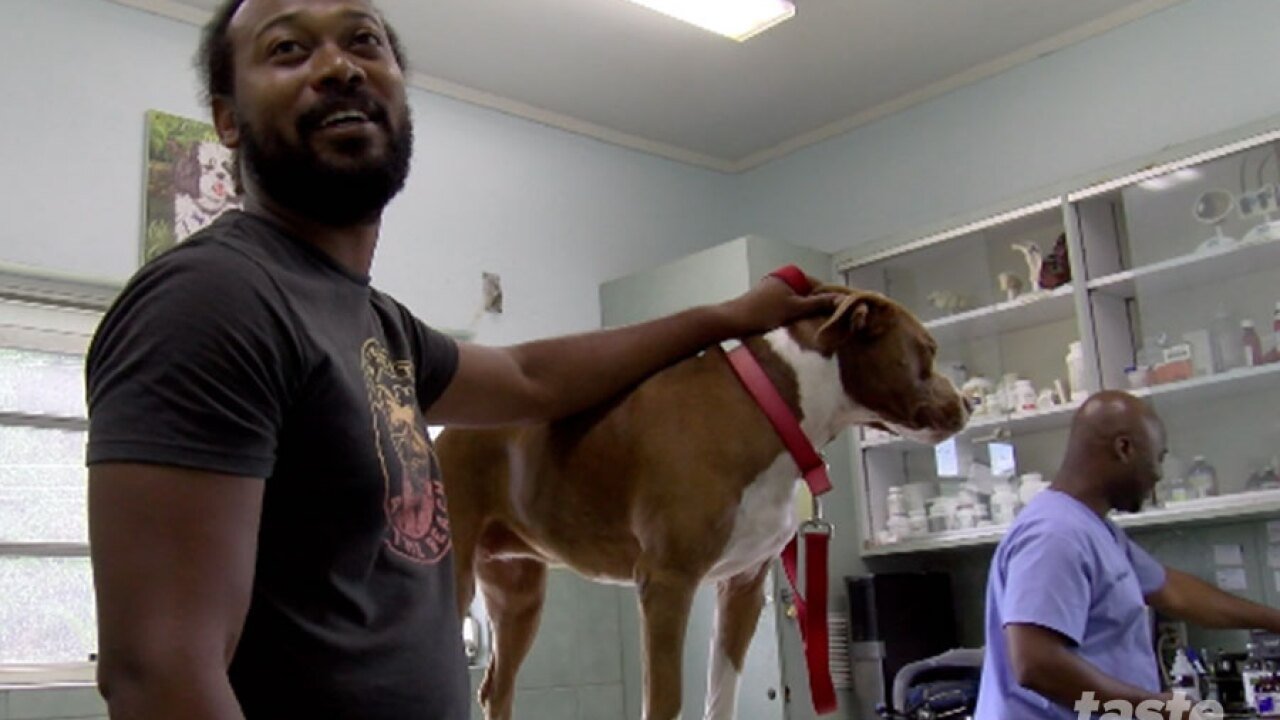 There are so many stories of total obliteration and despair coming out of Marsh Harbour on Abaco Island in the Bahamas. But among them are rays of light from tales about the human spirit.

One such story I literally came across during a Facebook Live at the Bahamas Humane Society in Nassau was about Chef David Thompson and how he repeatedly had to make tough decisions to abandon his faithful dogs and family members, their separations, and their eventual and miraculous reunion.

Waiting for the veterinarians at the Bahamas Humane Society to examine their dog Houdini, Chef Thompson and his girlfriend Tia Knowles were still in shock from the destruction of his restaurant and home in Marsh Harbour.

"I look atrocious, I look homeless," said Thompson. The daunting revelation of the accuracy of his statement sunk in for Knowles who quietly said, "We are homeless."

Thompson calls Houdini his protector, his buddy. During the height of Hurricane Dorian, he felt his roof was about to rip off because it was going up and down.

So he made a decision. He had to leave the dogs and seek shelter, leaving doors open so the dogs could move from room to room, where ever was safer.

"I escaped. Right? I got out without with no vehicles no nothing. Everything had been blown away," said Thompson.

Thompson went to a nearby clinic because it was the only structure left with a roof. He worked with a group of 10 men to help get floodwater out of the clinic.

As more and more people sought refuge and dead bodies started arriving, he had a thought.

"By morning I figured I had to get out of there and figure out a way out of Marsh Harbour," said Thompson.

Roads blocked, unable to get out of Marsh Harbour, Thompson spent the night in his apartment. Water started to trickle through his roof, which became filled with holes.

"By the end of the night it was floodwaters coming through the ceiling, sheet rock was falling everywhere. I pushed the floodwaters out of the house for about seven hours to keep the floodwaters manageable until I was sore and couldn't move anymore," said Thomson.

"It was a monster, it was an absolute monster. You prepare to lose something because there is no way you can't," cried Knowles.

Thompson used a small chair, beach umbrella, and a towel to protect himself from the collapsing roof so he could get some sleep with his dogs curled up beside him. Before cell phone service was lost he found out some more bad news. His restaurant, Da Blue Hole, had been lost.

"Do you have insurance?" I asked.

"No, but we have life," Thompson said.

"We lost an employee he was an angel," whimpered Knowles.

Da Blue Hole was a gourmet seaside restaurant Thomson invested in for over 10 years with his business partner, Chef Antonio Huyler.

"He's worked so hard to get that restaurant. He finally had his dream, it was finally there," said Knowles.

Picking up tools and supplies he could find in the rubble, as well as finding a car, Thompson went back to his apartment. Then more bad news: the radiator burst.

"It was another one of those down moments," said Thompson. But then came what he calls a ray of hope moment. "My restaurant manager, they pulled him out of nowhere and I was like, yes!"

"You don't know where anybody is, I spent four days tracking [David] I just needed to know he was alive," sobbed Knowles. She said she tracked him by asking people who had seen him, or through social media posts, but never in real-time.

Thompson said the conditions went from a functioning society to fighting for survival. The stench of death in the air.

"It was like an episode of 'The Walking Dead without the zombies," said Thompson.

Thompson decided it was time to leave.

"At this point, the two dogs are there and I'm not sure if I'm ever going to see them again. One of them her leg was damaged, so she couldn't follow us, but [Houdini] went through and through with us, she tracked foot to foot with us in every situation. She was my protector at the airport, my protector through the nights, and everything else in between, she made friends with everybody we saw, you know, we helped out anyone that we could," said Thompson.

Flights stopped going in and out of Marsh Harbour so Thompson raced up to Treasure Cay by boat and got on the last flight out to Nassau, but without Houdini.

"They wouldn't take her," said Thompson.

But as a gourmet chef and restaurateur, he had been cooking for people on the island after the storm had come through. Those good deeds were about to pay off.

The pair separated again, and Houdini disappearing again. The kindness of strangers, taking Houdini from Treasure Cay to Marsh Harbour, and eventually evacuating her out by boat. Then Thompson got an important early morning phone call about Houdini reappearing.

"She's in Nassau. I dashed out at 3 a.m. in the morning and I haven't slept since," Thompson said.

Thompson gave Houdini several baths and the dog is now at the veterinarian getting checked out.

"She lives to go on another day! She's found her way out of this. She's my dog, but she's my buddy, and she has held on tight. She won't leave my side right now if I go away for a [second] and she starts whimpering. I think she's scared that I'm going to run away again and leave her in the storm," said Thompson.

"She obviously loves you," I mentioned.

"I got her and she got me," Thompson said.