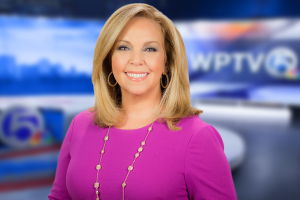 Born/Raised:
Born in Monterey California; but only lived there for one year. Raised in Daytona Beach, Florida – so Kelley is 99.9% Floridian!!

Work Experience:
WPTV West Palm Beach, FL
Kelley began her career at WPTV on February 10, 1986, two months after receiving her Bachelor’s Degree in Broadcasting from the University of Florida. Starting out as a reporter, Kelley was promoted to anchor within six months.

Currently the co-anchor of the 5, 6 and 11 p.m. newscasts on WPTV NewsChannel 5, Kelley is a six-time Emmy Award-winning journalist. For more than 32 years, many of her features have focused on community-minded issues such as:

• Seeing Red; which gave viewers insight into Retinoblastoma, a deadly eye cancer that sometimes can be seen in photographs. Kelley’s in-depth reporting helped to raise awareness about this disease and helped save the lives of at least three children in Florida.
• Driveway Danger alerted viewers to the heartbreaking epidemic of back over deaths among children.

Kelley has done several reports investigating the automotive devices available to help prevent such tragedies and the legislation that was eventually passed by Congress making these devices mandatory in new vehicles.

• Michael’s Message told the story of a family who lost their son to drugs and how they turned their devastation into a program which educates students about the perils of drug usage.

• A Mother's Anguish- the heartbreaking story of a Treasure Coast mother who accidentally left her infant son in her vehicle all day. She was sleep-deprived and working full time and feels her brain tricked her into thinking she had dropped him off at daycare. The mother shared her story in hopes of sparing other families the pain and agony she will live with for the rest of her life.

Kelley’s features are always well received by the viewers and that’s reward enough, but many professional organizations have acknowledged her efforts as well. Kelley has received awards recognizing her excellence in journalism by the Society of Professional Journalists, the Associated Press, and the Telly Awards.

Like many of us, Kelley has juggled being a wife and mother of two while working full-time. Kelley has supported many local organizations over the years including the Cystic Fibrosis Foundation, Mary’s Shelter, The Arts Council of Martin County and Dress for Success. She has been married to her husband John for 28 years. Their son, Jonathan, is an officer in the U.S. Army and daughter, Christina, is a professional illustrator. In her spare time, Kelley thoroughly enjoys decorating and organizing! She jokingly says her best friend is a label maker!!