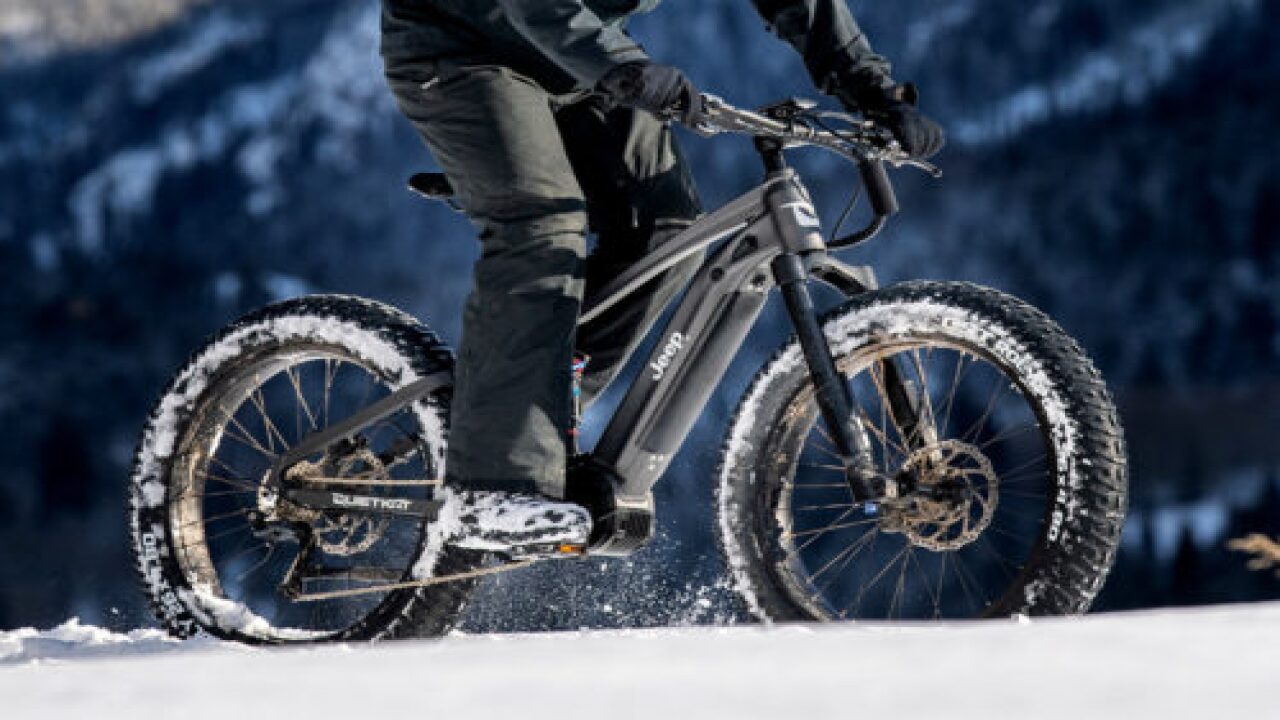 Did you catch Jeep’s Super Bowl ad Sunday night — the one with Bill Murray reprising his role in “Groundhog Day”? It was touted as one of the public’s favorite commercials that aired during the Big Game, which happened to take place on Groundhog Day this year. The ad was for the Jeep Gladiator truck, but you may have noticed a small cameo from an electric bike.

That bike, also a Jeep product, is an upcoming release from the company.

In the wake of the commercial, a bit more information has been released about the Jeep e-Bike. It’s being powered by QuietKat, a Colorado-based company known for their all-terrain electric bikes. The bike will have a 750-watt motor and can go 40 miles on a single charge. It also features 4.8-inch fat tires and QuietKat’s Fire-Link suspension, which is designed for extra traction and control through four-bar linkage and four-piston hydraulic brakes.

The bike, which its web page calls “Adventure’s new ride,” is expected to be released in June 2020.

If you didn’t notice it during the ad, check it out again:

Bill Murray is riding the e-bike at about the 38-second mark, and the groundhog rides in the basket in front.

CNet reports that this is the first such bike that Jeep has sold in the U.S., although it has apparently sold e-bikes in South Africa before. And MotorTrend says that the Jeep-branded product is essentially a version of QuietKat’s $6,000 Fat Tire RidgeRunner, a bike known for its capabilities on rock, snow, sand and trails. That bike has nine gears to help save battery power, which allows the bike to extend its range through pedaling.

However, industry analysts are speculating the e-bike could be even more powerful than Jeep and QuietKat are letting on: Electrek, which covers electric vehicles, claims it can tell based on the pictures and video already released that the motor is 1,600 watts, and the torque, brakes, battery and suspension will be even more powerfully high-end than advertised. We’ll just have to see, as more details are released closer to the sell date.

QuietKat has been posting about the Jeep e-bike on Twitter and you can also keep up with news about the bike’s release on Instagram at @jeepebike:

The All New @Jeep eBike, powered by @quietkat_ebike . Coming June 2020. Click the link in our bio to stay informed. #JeepeBike

Will the e-bike get a boost from Murray’s appearance on it during the Super Bowl ad? Possible! Marketwatch reported the results of a study that says brands pushed by athletes get a 4% boost in sales on average and that stock prices can go up a quarter of a point with a celebrity endorsement.

Plus, Murray is notoriously hard to get ahold of — apparently he has no phone, no email and no agent, Fiat Chrysler Automobiles chief marketing officer Olivier Francois told CNN. Eventually Francois tracked down the famous actor through mutual friends and Murray agreed to do the Jeep ad.

“This is my first commercial. I’m glad I did it with you (Jeep),” Murray said in a press release. “And I’m glad that this is my last commercial, as well.”

Are you excited by the prospect of riding a cool Jeep-branded electric bike through the outdoors?