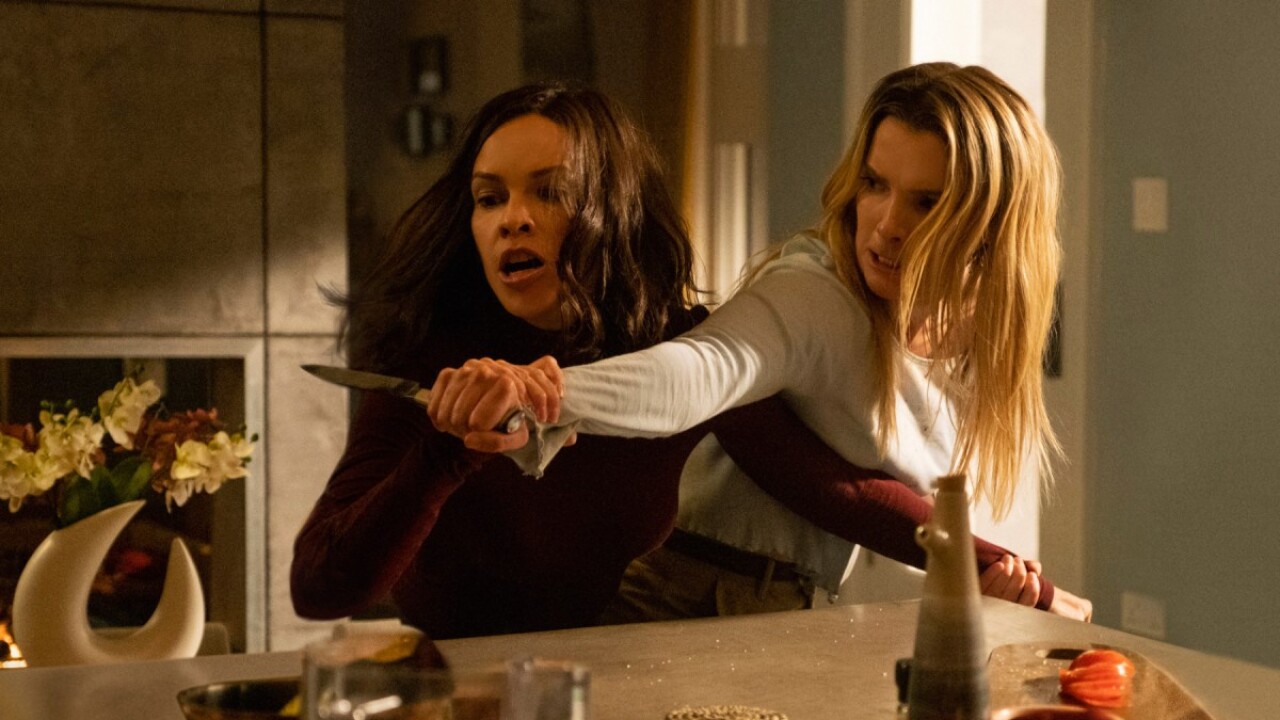 Universal Pictures
Hillary Swank and Betty Gilpin fight each other in a scene from &quot;The Hunt.&quot;

Last August, Universal Pictures started getting nervous about the September release of its new film "The Hunt," which deals with a group of wealthy liberal "elites" who engage in a new sport: hunting down "deplorables" from conservative red states. The studio became concerned after a series of mass shootings in the U.S. which were followed by President Donald Trump tweeting about a new film that was intended to "inflame and cause chaos." Although he didn't mention the movie by name, it was obvious he was referring to "The Hunt," so Universal pulled the plug.

Now, nearly six months later, the film is in theatres. And as is often case when people get upset about a movie that no one has yet seen, much of the criticism wasn't deserved or accurate.

First of all, I don't want to give away too much story-wise, but the movie begins with a clever sequence featuring text messages that quickly and efficiently sets-up the story: Twelve, mostly blue-collar, working class people have been drugged and flown by private jet to another country, where they'll wake up in a wilderness area, given the chance to arm themselves, and then try to get away.

The script by Damon Lindelof ("World War Z" and "Cowboys and Aliens") and Nice Cuse ("Watchmen" and "The Leftovers") introduces a number of well-known actors that seem like they'll be the main focus of the film, but then the story goes in an unexpected new direction that will keep the audience on their toes.

Eventually, we meet the primary cast members, led by Betty Gilpin ("Glow") as a Mississippi woman who is more than adapt at handling weapons and dealing with her heavily-armed adversaries.

Director Craig Zobel ("Compliance" and "Z for Zachariah") expertly moves the story along at a brisk pace, mixing some brutal violence with some very funny black humor.

Zobel has assembled an excellent cast that includes Wayne Duvall ("O Brother Where Art Thou") as a conspiracy enthusiast who provides some of the movie's comic relief. Also effective are Glenn Howerton ("It's Always Sunny in Philadelphia") as one of the painfully smug elites, as well as a very scary Hilary Swank as the leader of the privileged hunters. Swank doesn't appear until late in the film but dominates her scenes, and her showdown with Gilpin makes for a superbly staged fight sequence.

There was much speculation that this movie was anti-conservative, or anti-liberal. It's neither.

Both sides get their fair share of ridicule, with fun poked at everything from wild conspiracy theories, to Sean Hannity, to politically-correct language.

The end result is a very smart, clever parody of the current political climate that leaves the audience both entertained and with something to think about.