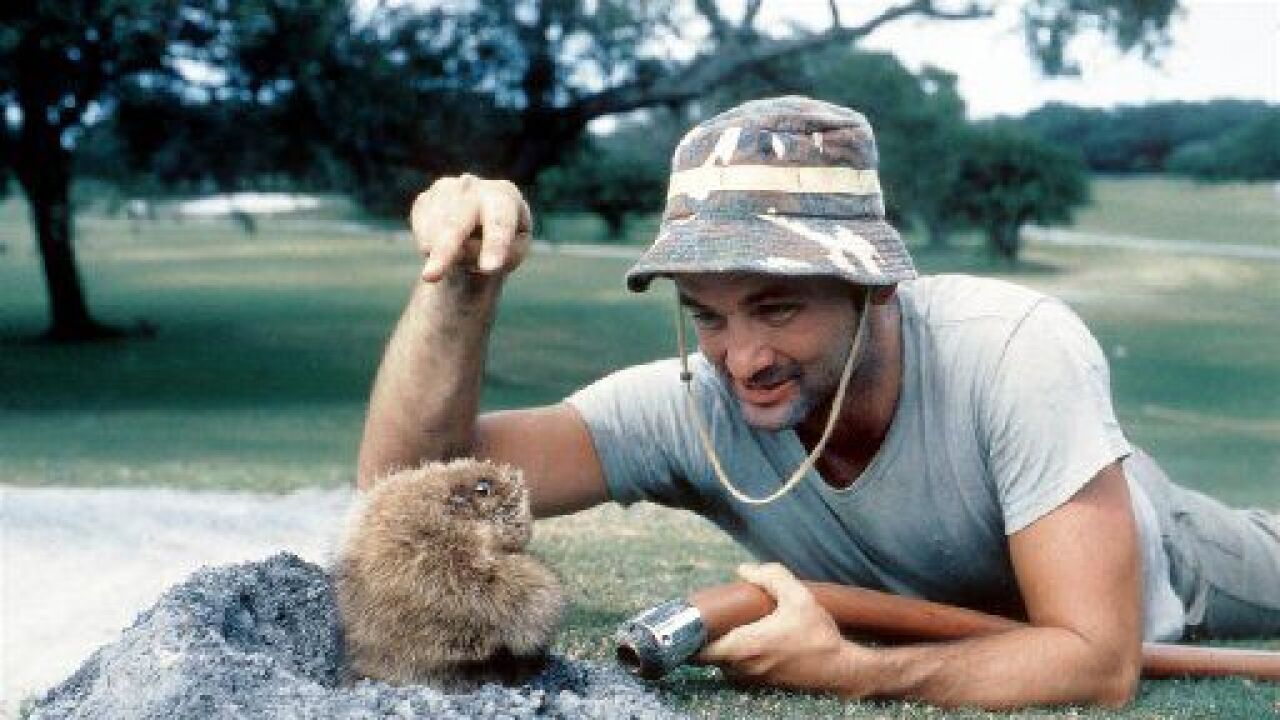 Courtesy of Warner Bros.
Bill Murray takes on a dancing gopher in the 1980 comedy classic "Caddyshack," which was filmed in South Florida.

The movie, starring Chevy Chase, Bill Murray, Rodney Dangerfield and Ted Knight, follows an ambitious caddie (Michael O'Keefe) who seeks to gain the favor of a stodgy judge (Knight) in charge of the caddie scholarship program at the fictitious Bushwood Country Club.

With a budget of $6 million, first-time director Harold Ramis (who would later co-star with Murray in 1984's "Ghostbusters" and direct him again in 1993's "Groundhog Day"), the rest of the cast and crew set up shop in South Florida over the course of 11 weeks in the fall of 1979 to hit the links.

The majority of the movie was filmed in Broward County, at what was then known as Rolling Hills Country Club in Davie.

"We kind of picked it by default," Ramis, who had been a writer on "Animal House," released two years earlier, told Sports Illustrated in 2010. "We visited a lot of really nice country clubs, and they didn't want us because what club wants to shut down for a movie and have hundreds of people trampling on the golf course?"

"At night, we would race golf carts down the fairways, people whacked out having a good time," he told Sports Illustrated. "The crew possessed whatever you needed."

"It was a pretty debauched country at the time," Ramis recalled. "The cocaine business in South Florida was mammoth, and everyone was doing everything. There was some concern from the studio."

Hurricane David didn't help either. The Category 2 hurricane forced production to shut down in early September, leaving lots of young cast and crew members riding out the storm with nothing to do except to consume plenty of booze and partake in South Florida's recreational drug of choice.

"I had never seen cocaine before I got to the set of 'Caddyshack,'" actor Peter Berkrot, who played one of the caddies, said in Chris Nashawaty's 2018 book "Caddyshack: The Making of a Hollywood Cinderella Story."

"Caddyshack" was Dangerfield's breakout role. Although he had been a big name on the stand-up comedy circuit and had been a frequent guest of Johnny Carson on NBC's "The Tonight Show," he was still relatively new to film. But Dangerfield made his mark in cinematic history as the brash and obnoxious nouveau riche golfer whose fashion and antics broke from conformity of the uptight golf club setting.

Sticking to the script was an afterthought during filming, given the talent assembled, except for Knight, whose comedic chops had previously been on display as the arrogant television news anchor Ted Baxter in the CBS sitcom "The Mary Tyler Moore Show."

"Most of us had an improv background, so I felt comfortable letting the actors ad lib," Ramis told Sports Illustrated. "But Ted Knight was a very traditional actor. The whole atmosphere was alien to him, young people running around in South Florida being crazy."

While that free range-style of filmmaking may have worked for Chase, Dangerfield and Murray, it clearly rankled Knight.

"Ted was trying to do his job and he's holding the script in his hand, and meanwhile Rodney is just running around saying whatever the heck popped into his head," Cindy Morgan, who played sexpot Lacey Underall, recalled to Sports Illustrated. "Ted was really angry."

But it may have been just the thing to help make the character of Knight's Judge Elihu Smails work.

The relationship between Chase and Murray was frigid at best, dating to their time together on NBC's "Saturday Night Live," though Murray described it to Sports Illustrated as "funny."

Ramis admitted that there was some tension between the actors, but when it came time for them to film a scene together (a scene that hadn't been in the script), he said they "were respectful and cooperative."

Rolling Hills was also cooperative, to a point, but it wasn't all carte blanche for the "Caddyshack" team.

A subplot involves a peculiar groundskeeper (Murray) hunting a gopher (one that dances to the beat of the film's theme song) that has been damaging the golf course.

For the climactic scene, Murray's Carl Spackler blows up the gopher holes, causing a massive explosion.

Legend has it that the owners of Rolling Hills wouldn't allow it, so producer and "National Lampoon" veteran Doug Kenney, who was born in West Palm Beach, lured them away so that Ramis and company could film the scene. The explosions were so intense that a pilot landing at the nearby airport in Fort Lauderdale thought a plane had crashed.

Although it opened to mixed reviews, "Caddyshack" has since become a comedy classic. It's widely considered one of the greatest sports movies -- if not the greatest golf satire -- ever made.

Rolling Hills capitalized on its popularity, earning the moniker "The Home of Caddyshack," but it was renamed Grande Oaks Golf Club after former Miami Dolphins owner Wayne Huizenga purchased it in 1999 and redesigned the course.

Other filming locations include Boca Raton in southern Palm Beach County (home to more golf courses than any other county in the country) and Key Biscayne in Miami-Dade County. The Fourth of July dinner party scene took place at the Boca Raton Resort & Club, while the yacht club scene was filmed near the famed Rusty Pelican restaurant.

"Caddyshack" also scored a hit for Kenny Loggins with the song "I'm Alright" and paved the way for a woefully subpar PG-rated sequel ("Caddyshack II," filmed in California and released in 1988, was so bad, in fact, that Warner Bros. sued Dangerfield for refusing to appear in it).

Sadly, many of the key players involved in the first film are gone. Kenney, who battled substance abuse, died barely a month after the film's release. His body was found at the bottom of a 35-foot cliff in Hawaii, where he had gone to get away after a drunken tirade during a news conference to promote the movie.

Still, their memories will live on for as long as "Caddyshack" remains a staple of the gentleman's game.