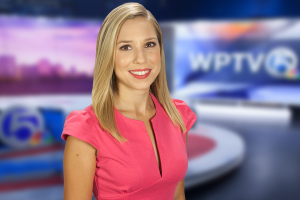 Amy Lipman became a member of the WPTV NewsChannel 5 team in July 2017 and is ecstatic to be back in the state where her dream to become a reporter initially began.

She returns to Florida after most recently working as a multimedia journalist for WMBF News in Myrtle Beach, SC, where she covered major stories, such as the destruction of Hurricane Matthew and subsequent historic river flooding, the national spotlight on crime in the city’s tourist area and the three-day search for an infant missing in a creek. Amy previously worked as a multimedia journalist in Grand Junction, Colorado, for KKCO 11 News and KJCT News 8.

Amy's first passion was for dance, which she pursued at various studios starting when she was six years old. Now, she enjoys dance in the form of zumba classes at local gyms. Amy caught the travel bug three years ago and has since been to 12 countries on four continents including Madrid, Spain, where she spent a semester honing her Spanish skills.

Amy loves walking her dog on the beach and spending time with her family here in South Florida.