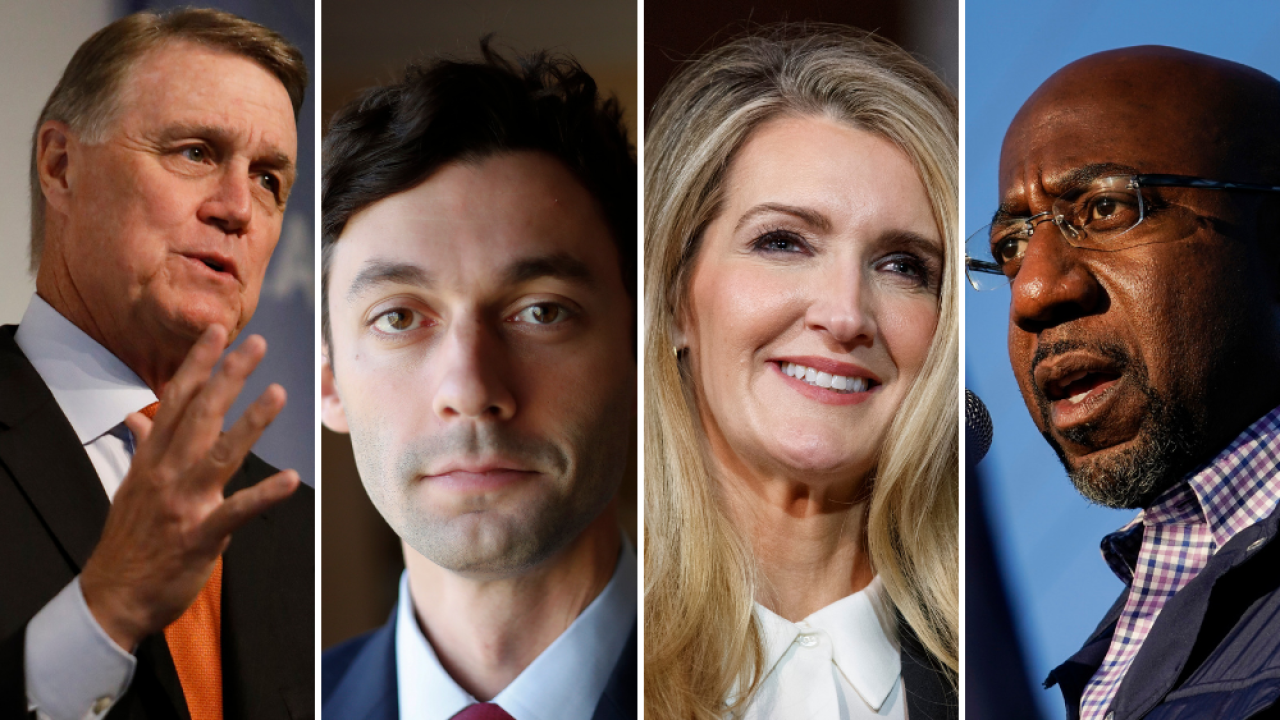 Associated Press
The four candidates vying for two Senate seats in Georgia. On Tuesday, Republican Sen. David Purdue (far left) will face off against Democrat Jon Ossoff (left middle) in a runoff election, and Republican Sen. Kelly Loeffler (middle right) will face off against Democrat Raphael Warnock (far right) in a runoff to fill a Senate seat in a special election.

1. All eyes on Georgia: Senate runoffs to be decided today
Today is a major day in American politics. With control of the United States Senate on the line, the highly anticipated Georgia runoff will take place.

Traditionally, Democrats haven't done as well as Republicans with runoff elections. Even though early voting records have been broken, Republicans maintain an edge. For instance in November, Senator David Perdue, one of the two Republicans, up for reelection, won his race by around 88,000 votes.

One big challenge for Republicans is getting Trump supporters to vote again. President Donald Trump has, after all, repeatedly raised doubt about election officials in Georgia.

One of the Georgia Republicans in Tuesday’s runoff — Sen. Kelly Loeffler, who faces Democrat Raphael Warnock — told the crowd she will join senators formally objecting to Biden’s win. The other Republican seeking reelection, David Perdue, who is running against Democrat Jon Ossoff, will not be eligible to vote.

Biden campaigned with Ossoff and Warnock in Atlanta, hoping he could recreate the coalition that secured him a narrow victory in the presidential race in November.

3. Florida hits 22,000 deaths, Town of Palm Beach begins vaccinations
Florida's coronavirus cases rose by 11,256, the most for a Monday since July as deaths increased by 103 with the death toll passing 22,000 residents, which was nine days after the 21,000 milestone, the Florida Department of Health announced Monday afternoon.

People 65 and older with scheduled appointments will begin receiving the COVID-19 vaccine in the Town of Palm Beach today. All appointments for this week are full.

Proof of residency must be verified through a government-issued ID with a town address or a utility bill with a Town address and a picture ID with a matching name. Those staying in short-term rentals are not eligible.

4. When will everyone else get the vaccine?
Calling the next two months "crunch time," Florida Gov. Ron DeSantis on Monday said he wants to identify large-scale sites throughout the state where mass COVID-19 vaccinations can take place.

The governor said Florida's Division of Emergency Management will work with the Florida Department of Health to identify state-run COVID-19 testing sites that can be converted into vaccination sites.

The governor said the next group he's targeting for vaccinations is the workforce, including teachers and other essential workers. However, he admitted it could take weeks or even months before enough vaccine is available for that population.

5. Tanya Roberts pulls shocking Lazurus act:
After reports surfaced that actress Tanya Roberts had died, TMZ and Inside Edition both reported on Monday that the 65-year-old actress was alive on Monday, but remained hospitalized.

According to Inside Edition, Roberts' husband Lance O'Brien was giving an interview when he got a phone call from the hospital that Roberts was actually still alive. O'Brien told Inside Edition that he was unable to see Roberts in the hospital due to COVID-19 restrictions.

Roberts has been hospitalized since Christmas Eve, when she collapsed while walking her dogs, according to TMZ.

On This Day In History
On January 5, 1643, in the first record of a legal divorce in the American colonies, Anne Clarke of the Massachusetts Bay Colony is granted a divorce from her absent and adulterous husband, Denis Clarke, by the Quarter Court of Boston, Massachusetts.