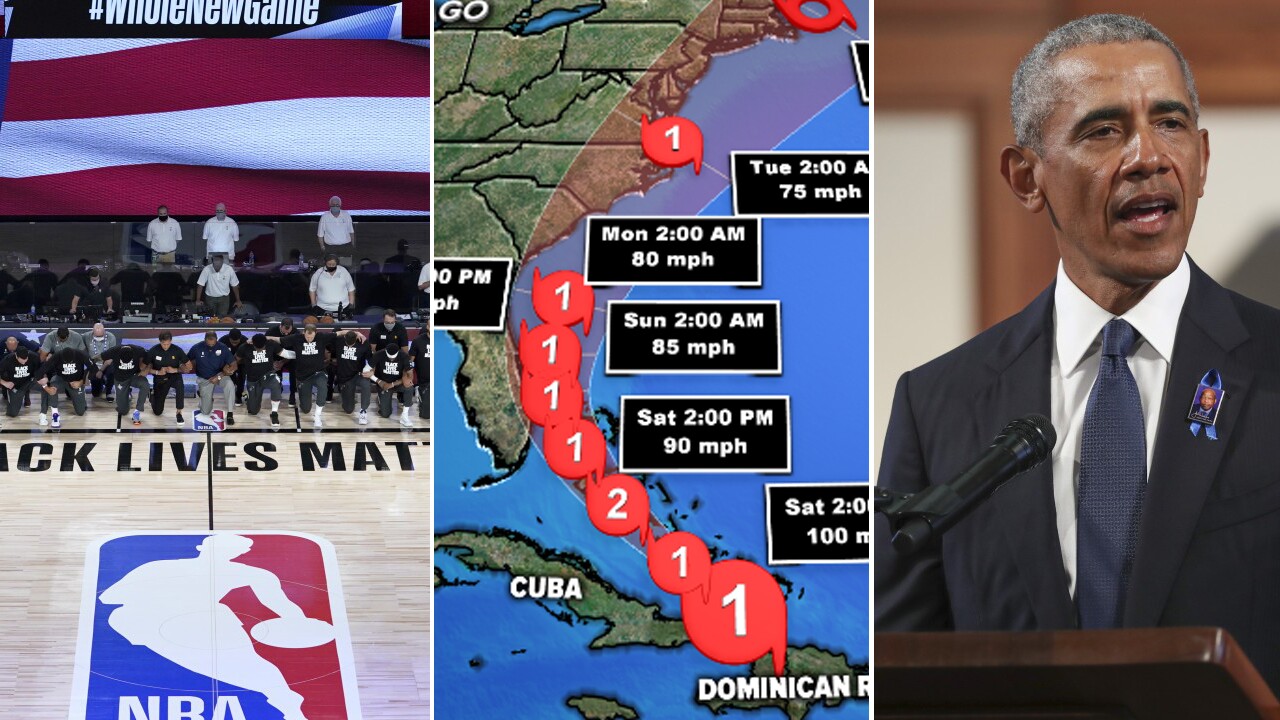 A Tropical Storm Watch is in effect for the east coast of Florida, including Palm Beach County and the Treasure Coast.

WPTV First Alert Chief Meteorologist Steve Weagle said Palm Beach County is still in the error cone, but it is possible we could drop out of the cone Friday night.

The previous two days were records: 186 Tuesday and 216 Wednesday. The day someone dies and when it is received by the state can lag for several days.

Florida has had the most cases in the nation for several days recently, including 9,446 Wednesday.

3. Goodbye to an icon: 3 former presidents mourn John Lewis at funeral
Former President Barack Obama delivered the eulogy for Rep. John Lewis during Thursday's service, speaking passionately about Lewis' "good trouble" and both his protests and politics for change.

Former Presidents George W. Bush and Bill Clinton also spoke during the service, both recounting stories from Lewis' life, including a popular story of the representative preaching to chickens as a child.

4. Basketball is back and college football makes some changes
We got our first look at the NBA bubble and it was interesting. Fans at home were shown in the virtual stands, commentators sat at comically long desks to social distance or with Plexiglass between them.

The season started with a focus on social justice and Black Lives Matter. Players and coaches from the New Orleans Pelicans and Utah Jazz knelt alongside one another before the first game of the NBA restart.

In football news, the Southeastern Conference decided Thursday that they are only playing SEC teams this season amid the coronavirus pandemic. That means no Florida-Florida State game!

5. Postmaster general says USPS is financially unsustainable, but the reasons are complicated
Unlike most government agencies, the USPS is statutorily self-reliant, dependent on revenue from services and not from tax funds.

Postmaster General Louis DeJoy wants to implement reforms and cut overtime from the budget. The moves could cause delays in shipments, however.

USPS funding has become a hot topic as the 2020 election approaches and many may vote by mail due to coronavirus. President Trump doesn't like that idea and even suggested delaying the election which only Congress can do.

Today's Forecast
Partly sunny with highs in the low 90s, the heat index around 100 degrees.

On This Day In History
On the morning of July 31, 1975, James Riddle Hoffa, one of the most influential American labor leaders of the 20th century, is officially reported missing after he failed to return home the previous night.

Though he is popularly believed to have been the victim of a Mafia hit, conclusive evidence was never found and Hoffa’s fate remains a mystery.