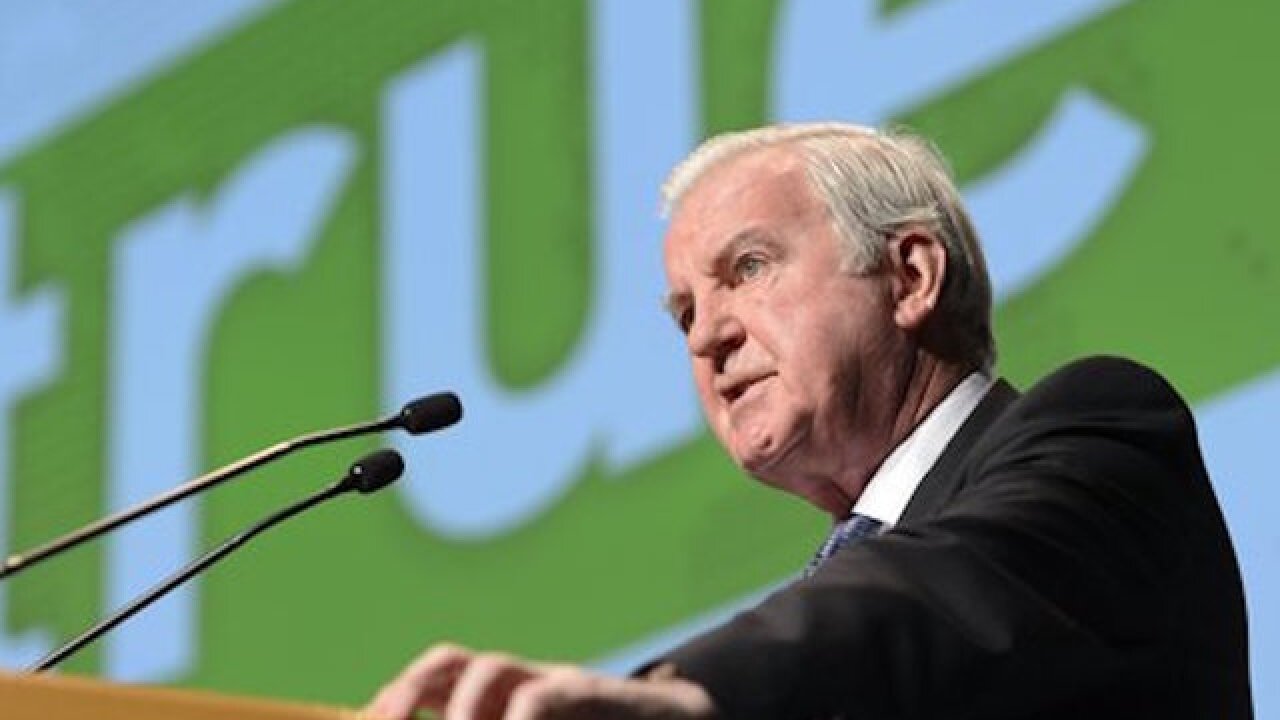 Laurent Gillieron/Keystone via AP
&lt;p&gt;This is a Monday, March 14, 2016 file photo of Craig Reedie, President of the World Anti-Doping Agency, WADA, as he speaks during a Symposium for Anti-Doping Organizations (ADOs), in Lausanne, Switzerland. Reedie in an essay released Monday May 9, 2016 is proposing that revenue from TV rights and sponsorship deals be used to help fund the fight against performance-enhancing drugs in sports. (Laurent Gillieron/Keystone via AP)&lt;/p&gt;

LONDON (AP) — A tax on TV rights deals and contributions from companies that sponsor drug cheats could help fund the fight against performance-enhancing drugs, the head of the World Anti-Doping Agency said Monday.

In an op-ed piece, WADA President Craig Reedie said "we all need to dig deeper" to find more money to finance global anti-doping efforts at a time when the integrity of sports is under threat because of drug and corruption scandals.

Reedie suggested levying a 0.5 percent tariff on all broadcast rights fees in a move he said would raise $175 million for anti-doping programs and increase WADA's budget five-fold.

"With such extra funds, we could make a greater impact in protecting the rights of the clean athletes, and in turn uphold the integrity of sport," he wrote.

WADA has an annual budget of about $30 million, which is funded 50-50 by governments and sports bodies.

"These broadcasters, who serve billions of sports fans worldwide, must have an interest in clean sport," he wrote. "After all, as sport's integrity is increasingly under threat, it is the fans — the very people who turn on the television to watch sport — who will tune out."

Reedie said it remains to be determined whether the broadcasters themselves would shoulder the cost, or whether they would pass it on to the sports federations.

He also said corporate sponsors — who pay about $50 million a year in sports deals — should kick in their share for anti-doping efforts.

"Doping is a threat to the sponsor's business, so why would sponsors not want to fund clean sport?" Reedie wrote.

He suggested that companies which sponsor athletes who have been sanctioned for cheating should divert money to anti-doping.

"Why does an organization that sponsors an athlete, who has been sanctioned for doping, not attribute the money it would pay the athlete during the sanction to the anti-doping movement instead?" Reedie wrote. "That is surely where its interest should lie."

Reedie noted that $12 million has been raised for anti-doping research through a joint WADA project with the International Olympic Committee. He has also requested that governments pitch in more to help fund investigations of the type that detailed state-sponsored doping in Russia.

The IOC has asked WADA to oversee the creation of an independent body to handle drug-testing worldwide. The target date is before the 2018 Winter Olympics in Pyeongchang, South Korea.

"We all have a duty to protect the clean athletes and ensure the fairest, most efficient system possible is in place for athletes across the world," Reedie wrote. "Sports, governments, athletes, broadcasters and sponsors alike share this important duty."